Baseball betting tips ahead of the 2020 MLB season - the American League and National League markets are heating up... 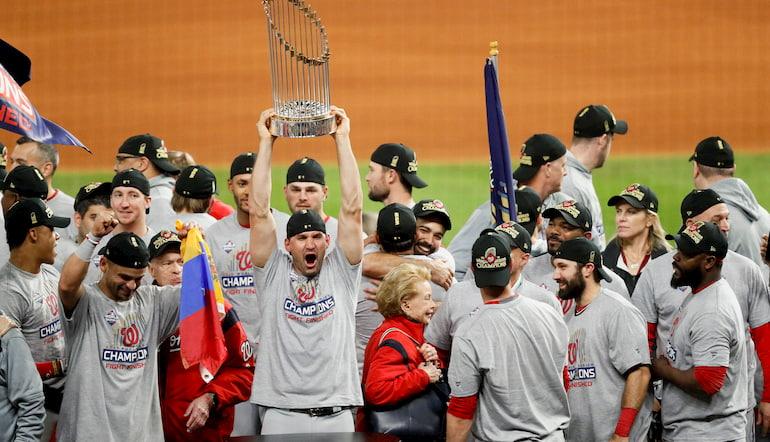 The 2020 MLB season is almost here. An offseason marred with sign-stealing controversy still hangs over the league, the Houston Astros and their players are a topic of conversation more than anyone would like them to be.

The early knockings of free agency feel like a lifetime ago, the days when wondering where Gerrit Cole and Anthony Rendon would land was the biggest concern of MLB fanatics.

Baseball’s reputation has been hurt. A season of beanballs will not help that.

The 2020 campaign will forever be a famous one – hopefully there are some positive news stories to associate with the year after the biggest cheating scandal the sport has faced since the steroid era.

Whether a seasoned MLB.TV watcher or needing some help from baseball for dummies, take a look at our MLB season preview, starting with the American League…

The New York Yankees lead the way at 2/1 ahead of the Astros at 5/2. Cole’s decision to swap Minute Maid Park for pinstripes might have shifted the balance of power at the top of the American League, but injuries are already cropping up for the Yanks.

Both are heavily favoured to win their divisions and Minnesota are odds-on to make it back-to-back Central crowns.

The AL remains top-heavy, and the Boston Red Sox’s decision to manage payroll has restricted the group of potentially elite teams. Even the Twins are out at 8/1 to make the World Series.

The Tampa Bay Rays are priced at 11/2 to win the East and 9/1 to make their second World Series. Projections don’t have them pushing the Yankees close, but with three legitimate Cy Young contenders and a deep line-up, the Rays could be a good bet.

The Chicago White Sox are a team to look out for. They made smart veteran additions to their immensely talented young core – Luis Robert will be joining Eloy Jimenez in the outfield and Yoan Moncada finally broke out in 2019.

A lot depends on the progression of their young pitching. They are solid price at 13/4 to win the division and will attract interest at 16/1 to make the Fall Classic.

Mookie Betts’ departure saw Mike Trout’s status as MVP favourite strengthen. The Angels centre fielder is 6/4, way ahead of the field - as you’d expect for one of the best MLB players of all-time.

Trout hit a career-high 45 homers last season: he keeps getting better. If healthy, it will (as it has in the past) take an historic campaign to stop him winning MVP.

There’s a bucketload of elite talent in the AL. Plenty of players could produce a Trout-rivalling year, so the longer-odds options will get some backing. Gleyber Torres at 25/1 represents good value after a great 2019.

The Cy Young award is more competitive. Former Astros teammates Cole and Justin Verlander will be battling it out again, and the Rays trio of Blake Snell, Charlie Morton and Tyler Glasnow are all lurking.

Morton racked up a career-high 194 innings last season, along with over 11 strikeouts per nine and a sub-three FIP. He’s the best bet of the three.

Watch out for Corey Kluber at 25/1. Injury ruined his 2019, but a bounce back year could be on the cards with the Rangers, who brought the best out of Mike Minor last year.

Recent memory of online MLB betting odds is dominated by the Los Angeles Dodgers. A former Cy Young winner and a former MVP were added this offseason to a roster already projected to cruise to an eighth consecutive NL West title.

The West is pretty dull. Turning our attention to the Central and East, however, things get much more interesting.

The Cardinals and Braves are respective favourites, but neither are foregone conclusions with the Cubs and Nationals sitting at 5/2. The Reds and Brewers in the Central and Mets and Phillies in the East are right in the mix, too.

Cincinnati were one of the busiest teams this winter, adding Mike Moustakas, Shogo Akiyama and Nick Castellanos to a line-up that struggled in 2019.

The rotation remains after a good season and Cincy will be hoping they get the best of Trevor Bauer. Their 3/1 price to win the division represents very good value, and it’s surprising to see them as ninth favourites to make the World Series.

The Washington Nationals, the reigning champions, lost another superstar in Anthony Rendon after seeing Bryce Harper walk the year before.

Juan Soto stepped into the Harper-shaped hole, replacing Rendon will not be so simple despite Carter Kieboom’s presence. The innings on their starters’ arms in the postseason could make this a trickier year. They are too short at 7/1 to win the pennant.

While the Braves look good as East favourites, the Mets are worth backing at 27/20 to make the playoffs. They should win more than 85.5, too.

Betts has switched leagues and moved straight in as MVP favourite ahead of his new teammate Cody Bellinger and Christian Yelich.

It was a toss-up between Bellinger and Yelich last season until the Brewers outfielder was sidelined. Both will be in contention once again, but it’s unlikely they keep up the standards of last season.

Veterans Jacob deGrom and Max Scherzer are ahead of the pack for the NL Cy Young. The duo have the track record to deserve that, and have duelled for the award in each of the last two years.

Two younger arms in Walker Buehler and Jack Flaherty (who had a monstrous second half of 2019) follow them in the market.

The pair will be competing for years to come and are already among the best starters in the game. Bauer, despite an ugly 10 starts with the Reds, is a worth consideration at 25/1.