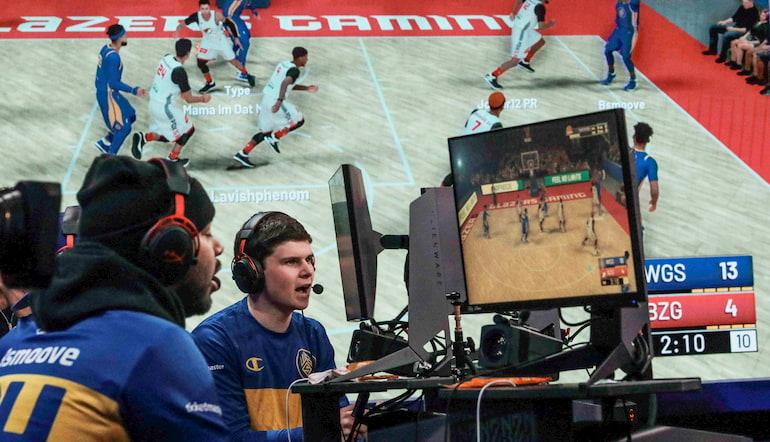 Those who bet on basketball are likely to delve into the world of NBA video games.

NBA gaming has evolved as drastically as any sports game over the years – the latest edition of NBA 2K is barely comparable to its 1990s peers, though a few of the NBA 2K video games make the cut in our best NBA video games list.

With that change comes improvement, but there are plenty who dream of those early days of NBA video gaming. The nostalgia of games which sucked up hours of our lives, which seem so simplistic now.

As we compiled this list of the best NBA video games, we are trying to acknowledge both the classics and the latest generation.

None of these will be appearing in eSports 888 betting anytime soon, though that doesn’t impact their candidacy for a place on this list. Here are the 10 greatest NBA video games of all-time…

Lakers Versus Celtics And The NBA Playoffs

Released in 1989, this game set the building blocks for what NBA gaming became.

Licenses were a relatively new discovery for NBA producers as they played catchup with their NFL and MLB counterparts, who had already produced Tecmo Bowl and RBI Baseball using likenesses and real teams.

Titled after the league’s two most storied franchises, this game enabled fans to play as the league’s biggest stars. The Dos version of the game featured 10 NBA teams, and had the All-Star teams from that season for good measure.

Versions followed with more complete rosters, but this was a taster of what was to come with Clyde Drexler and Michael Jordan’s unstoppable dunking and Larry Bird’s never-miss three-pointers.

Refereeing voiceovers and personal foul tallies were also included for the first time.

This was a bit niche, though not because of its quality. NBA Inside Drive 2002 was the first basketball game on the original Xbox, and as a result, very few had the game.

The Xbox was all about Halo in the early noughties, meaning NBA Inside Drive had a limited market.

Former Supersonics commentators made the gameplay enjoyable, giving it an authentic feel that was not commonplace in previous NBA games.

The graphics were more than solid by 2002 standards, but it was a game that lacked options – there was no franchise mode, so you could only play one season.

Playing against a friend was the best way to enjoy Inside Drive, though John Stockton and Gary Payton proved unstoppable.

Who didn’t throw weeks of their childhood into street games? FIFA and NFL versions were immensely popular, and the same could be said for the NBA’s alternative.

While the first edition was the mind-blowing game, the introduction of something completely different to the NBA gamer’s menu, Volume 2 brought more outrageous dunks and trickery along with several NBA legends.

The late, great Kobe Bryant was just beginning his Hall of Fame career when he starred on his first video game cover for NBA Courtside.

Released on the Nintendo 64 in 1998, Kobe Bryant in NBA Courtside was a fun game for its time. One of the best PC basketball games around, it was a joy to play.

Codes allowed gamers to mix things up, having disco courts and peculiar heads on players.

It was a different era for NBA gaming, when realism was unattainable, but this was an enjoyable game and worked well with the 64 controller.

So much of evaluating a video game is about what it leads to. New features, a leap forward with graphics, can identify a game as pivotal.

Obviously, there is not time yet to really judge what NBA 2K21 will achieve, but it has the natural benefit of being the first introduced on the PS5 and Xbox Series X later this year.

The game itself had some teething problems when released on the current gen. That’s perhaps to be expected, and particularly having developed a game during a worldwide pandemic.

The early look at the next gen versions of this game are spectacular, taking gameplay and graphics to a new mountaintop.

We don’t have the space to cover all the changes that have been made for the next gen.

Greater processing power opens doors for what 2K can achieve with their games, and from a content standpoint, they continue to add layer upon layer to keep gamers engaged for months.

It’s perhaps reductive to say the most recent game can always make this list. Some have been frustratingly flawed, but early signs are good for 2K21, and the move to the next gen will be a massive moment for basketball gaming.

Just like our list of the greatest NFL video games, it only feels right to include NCAA Basketball 10.

Sure, it’s not technically an NBA game, but with All-Star Blake Griffin on the cover and plenty of future NBA players involved, we’ll let ourselves off.

Licensing and legal conflict sadly brought an end to the NCAA series.

Fans still clamour for it to be brought back, and many will still dive into NCAA Basketball 10 to waste away the hours – this is a game that, through circumstances if nothing else, has stood the test of time.

This game was not only historic because of what followed – it was also as in-depth as any basketball game, allowing gamers to pick any player from over 300 top tier schools and even recruit high school prospects.

The possibilities were endless as college basketball fans looked to build their program to become one of the best in the country.

A game of progress after EA’s NBA series had got stuck in the mud.

The commentary was hilarious, and the music could give you a headache, but NBA Live, the first game to feature ‘Live’ in the title, brought major gameplay improvements.

Where previous editions had been clunky, this was played at proper basketball pace, and the shooting mechanics were much smoother.

This was a true trailblazer, introducing gamers to a whole raft of talent in a Michael Jordan-focused release.

Expectations are naturally sky-high when you market a game around MJ, and 2K emphatically delivered on that promise with this gem.

This was an era of NBA betting superteams, and 2K chucked some previous dominant clubs into the mix. There was a ‘Jordan Challenge’ series for gamers to delve into.

Graphics were at a level never seen before, and the content took a real step forward. It landed a whopping 89 on Metacritic.

There were criticisms of NBA 2K13, but the arrival of MyTeam was significant enough to earn it second place on this list. Metacritic loved it too, giving the game a rating of 88 out of 100.

MyTeam has since developed into a staple of 2K’s NBA series, a mode that has allowed gamers to construct their all-time dream teams and use versions of players previously inaccessible.

These trading card modes have taken over sports gaming, and MyTeam has been leading the way with many new features. It all started with 2K13.

This remains pinnacle of NBA gaming. Whether in an arcade or on a GameBoy, NBA Jam is still referenced in NBA media to this day, and fans are often found speculating how modern players would fare in the game.

Head-to-head games with friends were as captivating as they were infuriating, and the games with the AI were simple enough to be enjoyed by anyone without being repetitive.

Shattered backboards and bright colours brought a mix of NBA and a fantasy land. To this day, NBA Jam is widely regarded as the best NBA game for so many basketball fans.