Another titanic heavyweight battle beckons in Las Vegas - but will it be Fury or Wilder celebrating on Saturday night? 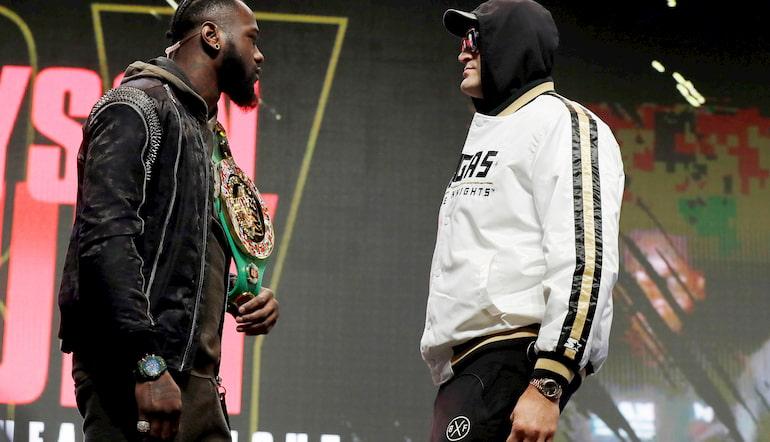 The first fight between Deontay Wilder and Tyson Fury sent shockwaves across the boxing world. To this day, people still ask the question – how did Fury get up?

The clip of Fury’s resurrection is now famous all around the globe and his never say die attitude at Staples Center won many American fans over on that fateful night in December 2018.

Both men head into this fight with unbeaten records but it is hard to envision another draw this time around. The winner could move into the top 10 pound-for-pound fighters in world boxing.

The stage is set for another special night of heavyweight boxing and Las Vegas is the perfect place to host such an iconic bout. The time for talking is over; it is now time to go to war.

Wilder is priced at 17/20 to claim victory this weekend and plenty of American boxing fans will be getting behind the Bronze Bomber at the MGM Grand.

The 34-year-old has won 42 of his 43 professional fights, with 41 of those victories coming by way of knockout. There are only two men to last the distance against Wilder: Fury and Bermane Stiverne.

The Bronze Bomber wasted no time dispatching Stiverne in their rematch in 2017, securing a thunderous first round success.

Fury fans will be hoping that the Gypsy King can cope with Wilder’s early onslaught – the American is likely to make a fast start. Should the WBC champion emerge victorious, he will surpass Muhammad Ali’s record of 10 title defences.

Unfortunately for Wilder, his opponent is Tyson Fury. Fury is a man who doesn’t do anything by halves; it is all or nothing.

He isn’t afraid to fight on the road, you only need to go back and watch his victory over Wladimir Klitschko to realise that. Fury’s determination and self-belief to get back to boxing’s summit is quite remarkable.

Most boxing fans believed that Fury won the first bout; he certainly seemed in control of the centre of the ring for most of the fight.

However, Wilder is arguably the most dangerous man in heavyweight boxing history. His knockout ratio certainly suggests that anyway, and Fury will be wary of getting caught with another Bronze Bomber combination.

For Fury, this is more than a fight. This is about writing the wrong from the first fight – the Gypsy King took the result graciously enough but Fury will want to settle the score in Las Vegas this weekend.

Boxing betting odds of 17/10 for Fury to win on points could turn out to be very kind indeed for punters if he gets his tactics right.

Fury is arguably the most unique boxer in the history of the heavyweight division and he could cement his status as one of the all-time greats with victory on Saturday night.

On the face of it, Wilder vs Fury II has potential to be one of the best rematches in boxing history and the Gypsy King will be quietly confident of coming out on top.

As a fun bet, the 11/2 for both fighters to be knocked down is well worth a punt. Wilder put Fury on the canvas twice in the first fight and he is always capable of delivering a knockout blow while Fury will want to secure a knockdown of his own.

Everything points towards an absolute classic battle between two of the best in the business.

The heart says Fury but the head is wary of Wilder’s power. Boxing followers from around the world will be tuning in on Saturday night expecting to see fireworks.

The 5/4 for Wilder to win by KO, TKO or DQ is worth a look – the Bronze Bomber is unlikely to outbox Fury and he may need a stoppage to retain his WBC title.