What is the history behind the Champions League trophy? Who are the most successful European Cup players? Find our UCL trophy guide here... 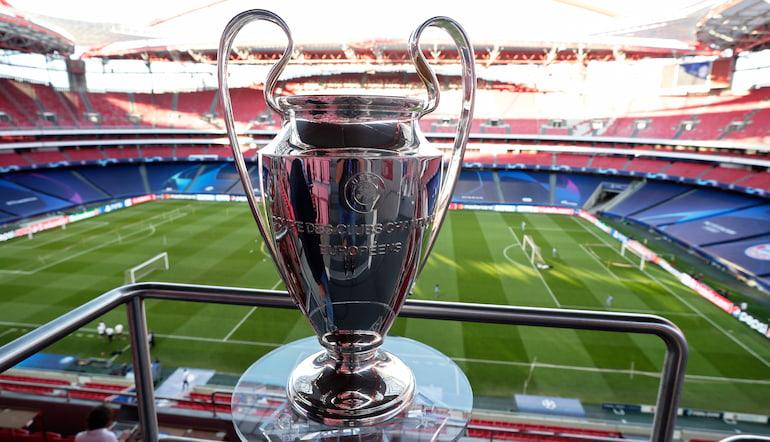 Lifting the Champions League trophy is the pinnacle in a footballer’s career.

Being top of Champions League betting odds does not guarantee success in the knockout competition. Many teams and players have chased the famous trophy for years without getting to hold it aloft.

The pinnacle of club action, football betting odds are frequently focused on the Champions League. It’s an opportunity to make history, for players and managers to secure their legacy alongside the greats of the game.

Even if only with a passing interest in online betting, it is impossible to ignore the Champions League. It dominates headlines. The final takes over the media cycle for days before and after.

This is a shot at sporting immortality like few other events on the planet provide. Through this piece, we’ll take a look at the history of the Champions League trophy and everything else you need to know.

That version was replaced when UEFA commissioned a new design in the 1960s, the current UCL trophy was created.

The trophy itself has stayed much the same since then despite several replicas being created with teams being awarded the trophy permanently (more on that later on).

Between 1967 and 1994, the trophy was engraved with "Coupe des Clubs Champions Européens". This changed in the 1990s. Since then, the full title has been in capital letters.

Champions are allowed to make their own replicas, but it cannot be more than 80% of the size of the original.

The original Champions League trophy was actually donated by French newspaper L’Equipe. This silverware was permanently given to Real Madrid in the late 1960s, however, prompting UEFA to create a new UCL trophy.

A jeweller from Bern, by the name of Jörg Stadelmann, was commissioned by UEFA to design the next edition of the Champions League trophy.

Still socially distanced but lovely to meet up again with my twin. pic.twitter.com/Q7mZKuek3i

Stadelmann’s design featured the now-famous large, curved handles. Around the world, this has earned the trophy the nickname of ‘big ears’.

What Is The UCL Trophy Made Of?

The Champions League trophy is made of silver. This isn’t exactly unusual, of course, and fits with the majority of major sporting trophies.

Stadelmann committed a long period to working on this trophy. It took a total of 340 hours to make.

The design was aiming to please various different countries, and according to UEFA’s official website, he was working to a particularly tight deadline due to a rather important upcoming event.

Stadelmann said, “My father Hans and I went along to Herr Bangerter's office and covered the whole floor with drawings.

"He made comments like, 'The Bulgarians would like the bottom of that. The Spaniards would like this but the Italians would prefer that and the Germans would go for this.' We put the design together like a jigsaw puzzle.

"It had to be finished before 28 March, because I was getting married and taking my wife on a ten-day boat trip to Los Angeles. I did the finer work, then it was finished off by the engraver, Fred Bänninger. On time, I am glad to say."

Although often thought of as a large trophy compared to its European football counterparts, this comes in as considerably smaller than the NHL’s Stanley Cup and the America’s Cup.

Lifting the UCL trophy is not the same physical exercise as it is to lift the aforementioned pair, but compared to other silverware in football, it’s a domineering presence for the team which comes out on top in the Champions League final bet of the day.

Comparisons between the Champions League and the Super Bowl are inevitable. They are arguably the two biggest nights of sport in the western world.

Unlike the Stanley Cup, the Vince Lombardi trophy is much smaller than the UCL trophy. It weighs less than half of the Champions League.

Francisco Gento is the most successful player in Champions League/European Cup history, winning the competition six times. Gento won six titles with Real Madrid between 1956 and 1966.

Captaining Los Blancos to their 1966 triumph, Gento is ahead of 10 players who won the competition five teams.

Seven of those were also on the all-conquering Real Madrid teams of the 1950s, with Gento’s win in 1966 putting him ahead of his former teammates.

The other three are icons of the modern era. Paolo Maldini and Alessandro Costacurta won five finals together for Milan. Going back-to-back in 1989 and 1990, they won again in 1994 before a nine-year wait for their fourth title.

The 2007 win was in the twilight of their careers, and saw Maldini break a record for the longest period between first and last Champions League wins.

Cristiano Ronaldo is the other player with five wins – one with Manchester United, four with Real Madrid. Ronaldo is the only player to score in the final for two different winning teams.

Do Clubs Get To Keep The Champions League Trophy?

The short answer is no. Teams no longer get to keep the real trophy, which stays with UEFA at all times. This has been the case since 2009.

Previously, a club could keep the trophy if they were crowned European champions on five occasions or won in three successive seasons.

Obviously, this resulted in several new Champions League trophies being made when teams earned the right to keep it.

Five teams have been awarded the trophy permanently. Real Madrid were the first after their sixth title in the 1960s, followed by Ajax’s threepeat in 1973, and Bayern Munich winning three on the bounce a few years later.