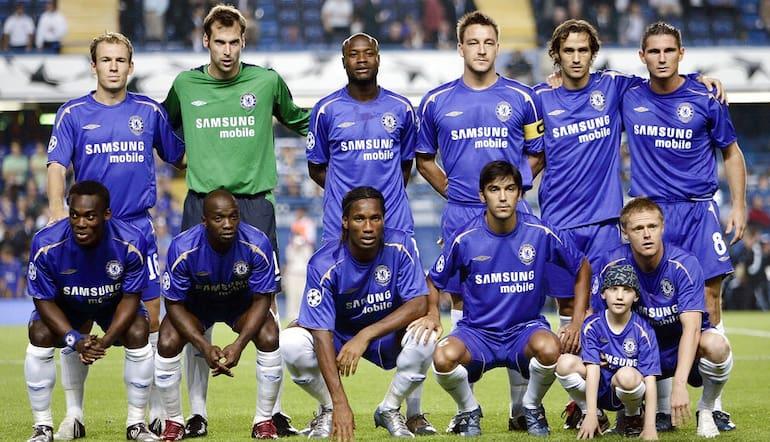 In the summer of 2004, Jose Mourinho rocked up at Stamford Bridge, immediately declaring himself to be ‘special’ and wasting little time in overhauling an already very decent squad.

The previous May, the Blues had finished second under Claudio Ranieri, their highest finish since Roman Abramovich took control of the club.

Indeed, it was Chelsea’s best league return for over thirty years as they looked to establish themselves firmly among the elite.

Yet Mourinho had no interest in being nearly successful. Nearly was anathema to him.

So the newly appointed ‘Special One’ ruthlessly took a flamethrower to his playing options, dispensing with under-performing fare as well as aging greats who could legitimately be viewed as club legends.

With sentimentality kept to a minimum, Marcel Desailly and Jimmy Floyd Hasselbaink were released that summer.

In their place, the coach who had just upset the betting by guiding Porto to an entirely unexpected Champions League triumph was quickly reunited with one half of its back-line, in Paulo Ferreira and Ricardo Carvalho.

The former remains one of the most under-rated full-backs in the Premier League era. The latter’s partnership with John Terry soon became the gold standard that all subsequent centre-back duos have been compared to.

We're discussing the best defence of the Premier League era on #BTSportScore:

Who gets your vote?

Bolstering his attacking roster meanwhile, Mourinho signed Arjen Robben and Didier Drogba for a combined sum of £36m. That was a fortune in 2004. Within a year it felt like a steal.

As brilliant and fundamental as these purchases undoubtedly were, however, Chelsea’s most important recruit arrived in early July, when Petr Cech joined from Rennes.

Unflappable and seemingly unbeatable between the sticks, the giant Czech went on to smash all kinds of top-flight records for his goalkeeping feats, claiming the Golden Glove on four occasions.

Looking back on this magnificent collective we are of course very familiar with what they went on to achieve. But perhaps back then it would have been sensible to expect a period of transition.

After all, here was a new manager, in a new country, assimilating several new faces into a squad adapting to a new style of play.

Instead, remarkably, Chelsea seemed fully formed right from the off.

On the opening day they beat Manchester United 1-0, in a manner in which they bested many opponents that season, over-powering them and going in front, then relying on an impenetrable defence to see them home. And thus, a template was set.

Because across a season that saw them defeated just once and crowned champions by April, Mourinho’s monsters of 2004/05 kept a record-breaking 25 clean sheets, meaning that in 65.7% of their fixtures they were not breached.

❍ 38 games
❍ 25 clean sheets
❍ 15 goals conceded@CJSmith91 is going to tell you about them all. #ThrowbackThursday

They conceded a record low of 15 goals all season long, meaning that from August to May, a ferociously well-organised rear-guard was navigated every 3.8 hours. They won 30% of their games 1-0.

They were a machine, a highly efficient and formidable one at that and it really didn’t matter who they faced, whether it be title rivals or struggling teams featuring strongly in the Premier League relegation odds, the method and the result was the same.

They killed you with their firepower, then simply shut up shop.

We will likely never again witness such a beast and maybe that’s not such a bad thing. But still, it is perfectly possible to forever appreciate them, to marvel at their strength and structure.

And that especially applies to a defence that was rarely beaten back then and has never been beaten since.