Our horse racing predictions expert picks his way through Cheltenham Day 1 tips ahead of the 2022 Festival... 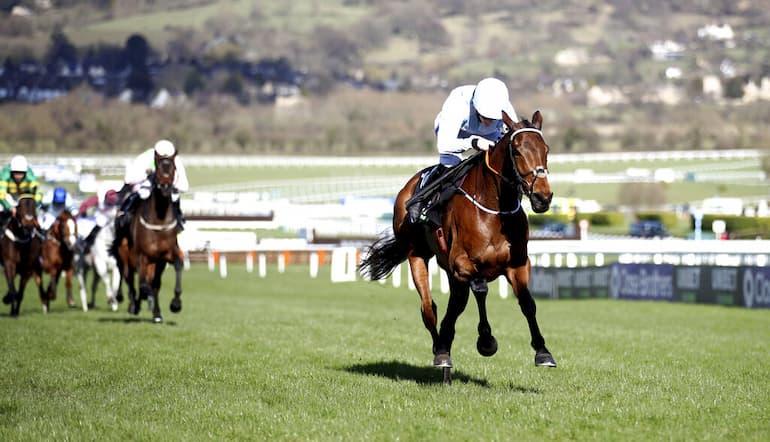 The Cheltenham Festival gets underway on Tuesday and horse racing betting odds are now live on every race.

Punters looking for Day 1 tips at the Festival can find our free horse racing tips live on the blog – fingers crossed we back a few winners!

The atmosphere will be back at Prestbury Park this year and racing fans are eagerly anticipating the famous Cheltenham roar ahead of the Supreme Novices Hurdle.

Without further ado, let’s take a look at our Cheltenham Festival Day 1 tips. Find the latest Cheltenham racecourse results and more throughout the week here at 888sport!

Trainer Nicky Henderson has landed the Supreme Novices’ Hurdle twice in the last six years with the likes of Altior and Shishkin, and he can do so again this term with his star runner - Constitution Hill.

The five-year-old burst on the scene with an impressive victory at Sandown in December and returned to the Esher track in January to steamroll his opponents in the Grade 1 Tolworth Hurdle.

He has shown plenty of raw talent thus far in his fledgling career and can get the British home squad off to a flyer in the Cheltenham opener.

Those looking for a longshot to make the frame should consider the chance of Paul Nicholls’ Silent Revolution who should never be a 50/1 poke.

5/2
Constitution Hill To Win or Each Way

The Alan King-trained Edwardstone has been victorious in his past four races, taking in a novice chase before picking up three Graded scalps in the shape of Sandown’s Grade One Henry VIII Chase, Kempton’s Wayward Lad and Warwick’s Kingmaker Chase – the latter of which is normally a useful barometer for the Cheltenham Festival.

The eight-year-old has looked liked the real deal this season and at 2/1 in our horse racing betting, he can add the Arkle Challenge Trophy to his already impressive C.V.

The supplemented classy novice Gabynako can be taken to make the frame and possibly the runner-up spot.

11/4
Edwardstone To Win or Each Way

After watching Corach Rambler win the St Helens Novices' Limited Handicap Chase over 3m1f at Aintree back in October, I had Lucinda Russell’s charge down as a future Grand National winner.

Having unseated his rider at Ascot in February, many punters may be put off him here but it was only a minor blip and Derek Fox had no chance of staying the saddle, at a time when his mount was still bang in contention.

Everything looks ideal for the eight-year-old on Tuesday and he is a confident each-way pick.

Of course a 24 runner handicap requires more than one selection to make it pay and two that take the eye at fancy odds are Discordantly (20/1) and Belargus (40/1).

Jessica Harrington’s Discordantly bounced right back to form just nine days ago at Leopardstown and visually appeared to have plenty more left in the tank. If this race hasn’t come too soon, he can go well under the experienced Robbie Power.

The Nick Gifford-trained Belargus is a dangerous floater too. He was staying on at Chepstow over hurdles last time out, in what were testing conditions, and he should find this 3m1f more to his liking.

11/1
Corach Rambler To Win or Each Way

The unbeaten star mare Honeysuckle bids to make it 15 wins from as many starts in this year’s Champion Hurdle.

Henry de Bromhead's runner is unbeaten in 14 starts under rules, with her 10 Grade One victories including three Irish Champion Hurdles and of course last year's success in this very race.

Trading at around the 4-7 mark, she’s the one they all have to beat, but faces an intriguing rival in Appreciate It, who dotted up by 24 lengths to win last year’s Supreme Hurdle.

If he still retains all that level of natural talent he may give the favourite something to think about.

Having won his last three starts at Grade Two and Three level, Teahupoo is taking a marked step up in class but he could well make the podium in this contest.

4/7
Honeysuckle To Win or Each Way

The David Nicholson Mares' Hurdle is unsurprisingly dominated again in the betting by Irish-trained runners but I shall be siding with the British-trained Marie’s Rock (12/1) for the victory.

Only seventh in the Greatwood Hurdle back in November, she has since won two of her completed starts at 2m 5f  and Nico De Boinville will be back in the plate again.

Marie’s Rock was actually the ante-post favourite for the Dawn Run a couple of seasons back before a setback ruled her out so connections will be hoping for a change of luck today.

Of the others, Stormy Ireland looks the pick of the Willie Mullins entries, while Mrs Milner can be a big player too for the Paul Nolan stable.

The Fred Winter Juvenile Hurdle is a wide open race once again this year with all 22 runners having some short of chance.

After studying the essential Irish form, I am of the opinion that the Paul Nolan-trained HMS Seahorse is well worth an each-way flutter in this contest.

Formerly trained on the Flat by Aidan O’Brien, HMS Seahorse is already used to the hustle and bustle of a large field and won his Fairyhouse Maiden Hurdle in nice style.

He’s a speculative pick, but he appears to be on the up and under the capable hands of Bryan Cooper he cannot be ignored at odds of 14/1 in our online betting market.

Champion Green, in the green and gold silks of JP McManus, looks like another interesting contender, as does Skycutter at a whopping 66/1, who won’t have to face his nemesis Porticello on this occasion.

The National Hunt Challenge Cup sees its smallest field in decades and what was once a thriving each-way betting heat of 20+ runners has now effectively been reduced to a “win single” type of a race.

Those of you so inclined to have a wager on the Tuesday finale should look no further than the Gordon Elliott-trained Run Wild Fred who we make our 888Sport NAP of the day.

Runner-up in the Irish Grand National last season, Run Wild Fred showed he was a class animal when romping home in the Troytown Handicap Chase at Navan earlier in the season.

He’s totally made for this trip today and is ridden by one of the best Irish amateurs around – Jamie Codd. Cue the obligatory “Codfather” memes and jokes.