Famous Dutch Darts Players: Who Is The Best Dutch Player In Darts History?

Dutch darts players are popular amongst darts betting fans but who is the greatest of all-time? We look at Michael van Gerwen, Raymond van Barneveld and more... 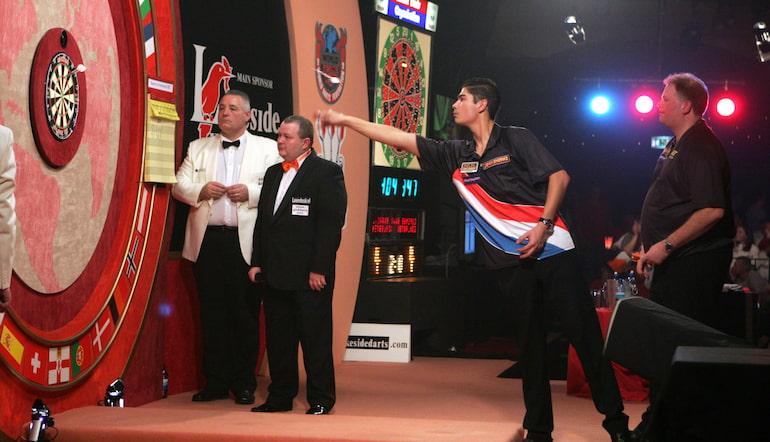 If you’re into your darts betting, chances are you’ll recognise most of the names on this list. A popular sport in the Netherlands, darts is easy to understand, entertaining to play, and exciting to watch.

The likes of Raymond van Barneveld and Michael van Gerwen have been flying the flag for the Netherlands over the years and Dutch dart players compete regularly on the big stage.

With several Dutch names listed in the PDC Order of Merit rankings, it is fair to suggest that the Netherlands is a leading nation when it comes to throwing arrows.

Betting odds often favour Dutch darts players but that isn’t an exact science. Here, we look at some of the greatest darts figures to hail from the Netherlands.

Let’s start with one of the greatest Dutch darts players to ever play the game, Raymond van Barneveld.

A five-time world champion, Van Barneveld will go down as one of the largest figures in the sport – he was a huge hit with darts fans around the world throughout his career.

Van Barneveld is one of the first names on any top 10 darts players list. Without a shadow of a doubt, Barney is an absolute legend of the oche.

Now synonymous with ‘Eye of the Tiger’ by Survivor, the greatest Dutch darts player ever is just as famous as footballers and musicians in his native Holland.

One of the newer names on the Dutch darts players scene, Dirk van Duijvenbode is famous for his high energy walk on and hardstyle dance music.

Currently on the verge of breaking into the PDC top 20, Van Duijvenbode enjoyed a positive 2020 campaign and he has carried that form into 2021.

At the time of writing, Van Duijvenbode has reached one ranking final – falling short against Gerwyn Price in the 2020 World Grand Prix showpiece.

Previously nicknamed ‘The Titan’, he is now known as ‘The Aubergenius’ after taking a job as an administrative assistant at a local aubergine farm.

Hailing from Joure, Danny Noppert has been around for a few years now and the Dutch star has climbed up to number 23 in the PDC world rankings.

Often the bridesmaid but never the bride, Noppert made the transition to the PDC in 2018 after winning a two-year Tour Card by finishing top of the European Order of Merit.

Known by darts fans as ‘The Freeze’, Noppert regularly features at the biggest tournaments but consistency has eluded his hopes of challenging for major honours.

The Dutchman was ranked 47th in the world in 2018 and he continues to go from strength to strength. Still just 30 years old, Noppert could yet break into the top 20.

Like many Dutch players, Van der Voort plays at a fast tempo and he is one of the most entertaining players to watch on the oche.

He has performed admirably at almost every PDC event and is popular with darts fans around the world – the crowd can be heard singing his name when he is on stage.

While his speedy playing style is exciting for viewers, you could label him erratic and that is the main reason why he often falls short in his pursuit of titles.

As of August 2021, Jeffrey de Zwaan is still just 25 years old and he is widely regarded as the new kid on the block.

De Zwaan upped and left the BDO in 2015 and he has slowly started to make an impact on the PDC – climbing the Order of Merit rankings in recent years.

While he has yet to feature among the top 20 players in the world, De Zwaan is on the verge of breaking into the elite.

‘The Black Cobra’ is one to watch in the coming years and he could be the best Dutch darts player if he continues to progress at the highest level.

‘The Cobra’ has been playing darts since 2003 and he became the youngest player ever to win the World Darts Championship at just 21 years old in 2006.

Like most of the best players on the circuit, Klaasen made the transition to the PDC in 2007 and has featured at most ranking events – both on and off television.

While Klaasen has slipped down the PDC world rankings in recent years, he remains one of the best Dutch darts players to grace the oche.

Renowned for his exceptionally quick throwing style, Klaasen is still able to compete against his younger rivals. Blink and you’ll miss him.

Finally, we have Michael van Gerwen. While he has recently slipped to number three in the world, the Dutchman has dominated the sport since Phil Taylor’s retirement.

Undoubtedly the most talented Dutch darts player to throw arrows, Van Gerwen is an absolute joy to watch and he is the Lionel Messi of the darting world.

A three-time PDC world champion, Van Gerwen is still just 32 years old and ‘MVG’ can reign supreme at the top of the sport for many years to come.

It surely won’t be long until we see Van Gerwen back at the top of the PDC Order of Merit, though Taylor’s record of 16 world titles looks safe.

Darts Tips
About the Author
By
Alex McMahon