A look at the largest eSports attendances and the most watched eSports tournaments around the world - millions of people are now following eSports... 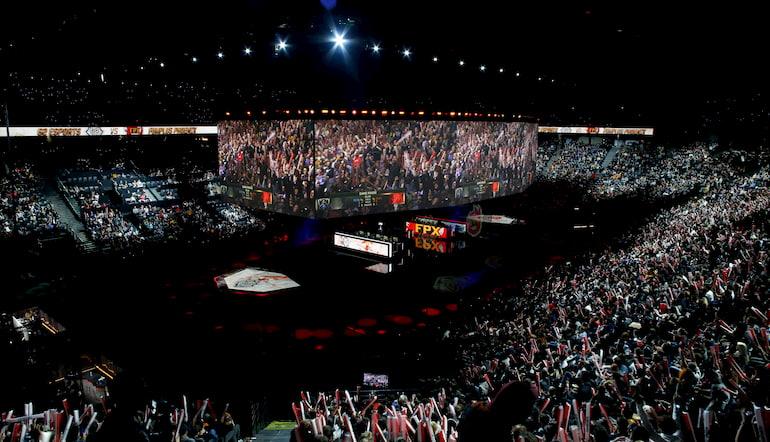 While its classification is still controversial with some, eSports has become an enormous industry.

The largest eSports attendances are comparable with any event on the planet and the money at stake makes the best eSports players in the world extremely wealthy.

For there to be such money involved, there needs to be vast interest, and eSports certainly have that. Millions watch the biggest events on streams and thousands cram into stadia for tournaments like the Intel Extreme Masters.

Activate estimate around a quarter of a billion people watch eSports. There’s no doubt about it: eSports is competing with traditional sports, attracting audiences that rival the Super Bowl in America.

Activate projects eSports to sit second behind only the NFL in viewership by the end of 2020.

Companies looking for sponsors want to promote the highest figure possible in their push for revenue, so there can sometimes be confusion over unique viewers versus peak viewership.

For the purpose of this list, we will be focusing on unique viewers to make sure we’re comparing apples with apples.

eSports have been popular in Asia for a long time, with games like League of Legends drawing massive crowds and selling out stadia including Beijing’s Bird’s Nest, but the last few years have seen major growth in the western world, and particularly in north America.

Though the USA may seem saturated with sport, eSports have found their market and continue to grow. The following list shows the most watched eSports events, ordered by unique viewers…

The fourth edition of a Riot Games-led League of Legends tournament, the Mid-Season Invitational registered 60 million unique viewers in 2018.

The European, north American, South Korean and Chinese leagues have teams automatically representing them in the tournament, while other leagues compete in a play-in tournament.

Paris hosted the playoffs and Berlin was home to the group stage and playoffs for the 2018 event with over 350 million hours watched.

Royal Never Give Up were the winners, taking down Kingzone DragonX in the final. Uzi won MVP, and the final was one of the most watched events in eSports history.

Three games combined to make up the Intel Extreme Masters in 2017.

Played in February and March of that year, champions were crowned in Star Craft II: Legacy of the Void, League of Legends and Counter-Strike: Global Offensive.

Hosted in Poland, 173,000 people attended the stadium for the 2017 finals as Denmark’s Astralis bettered FaZe Clan at Counter-Strike, Flash Wolves came out on top in the League of Legends final and TY beat Stats at Star Craft II.

For those looking to bet on eSports, the Intel Extreme Masters might be the event for you.

With a range of games being played, bettors have options aplenty, a luxury that isn’t afforded at most other eSports events.

The 2016 League of Legends World Championship was held across four American cities: Chicago, San Francisco and New York, with the finals taking place in Los Angeles.

Dominated by South Korea once again, Samsung Galaxy faced SK Telecom T1 in the final, with the latter coming out on top and claiming the $2.6 million prize money.

The losers had to settle for just over a million dollars as SK Telecom T1 made it three championships in four years.

Nearly 20,000 fans were at Staples Center for the all-South Korean final, with Zedd making an exclusive song for the occasion.

The Crossfire World Championship took off in 2017, seeing roughly a 50% increase from its viewership the year before with over 37 million tuning in.

The Grand Finals prize pool was up at $850,000 thanks to Smilegate’s investment in eSports.

Crossfire is the most played game ever, and the 2017 World Championship were accessible worldwide, being broadcast live in six different languages and on a range of streaming platforms.

Success of the 2017 tournament was dependent on teams from around the world competing with the Chinese contenders, which resulted in Vietnamese and South American interest skyrocketing.

The Mid-Season Invitational was announced in 2015 and the number of teams increased from eight to 10 in the north American and European regions of the League Championship Series.

It was also the year that saw an introduction of the compulsory head coach to stay on stage and speak with the team via voice chat.

Along with 36 million unique viewers, the 2015 League of Legends 2015 World Championship saw a peak concurrent viewership of 14 million.

Again hosted in Katowice, the Intel Extreme Masters make their second appearance on this list. Another familiar name appears too, with SK Telecom T1 besting Fnatic in the League of Legends final.

Counter-Strike: Global Offensive saw the Swedish Fnatic face the Brazilian team Luminosity Gaming, and it was South Korean victory at StarCraft II as Polt were victorious over Snute.

The 10th season of the Intel Extreme Masters was another successful one, earning it the sixth spot here with 34 million unique viewers.

Breaking records once again, the 2013 League of Legends World Championship took place at Staples Center in 2013.

SK Telecom T1 were celebrating at the end, having defeated Chinese team Royal Club in the final to get their hands on the $1 million prize money.

Looking back to earlier in the 2010s demonstrates how rapidly eSports have taken off. The prize money has increased significantly in just a few years, and SK Telecom T1 have been one of the biggest beneficiaries of that.

Keep up to date with our eSports tips for future League of Legends World Championships.

Only founded in 2016, it didn’t take long for the DreamHack Masters to make their way onto this list.

The 31 million unique viewership for the event in Malmo was a roaring success considering they had only staged two tournaments previously, one in Las Vegas earlier in 2017 and one in Malmo in 2016.

The Grand Final of the 2014 League of Legends World Championship took place at Seoul’s World Cup stadium and a home team were celebrating once again as Samsung White beat Star Horn Royal Club in the final to get their hands on $1 million prize money.

Imagine Dragons delivered the theme song for the tournament and performed live at the grand final. It was a truly international event with 40 broadcast partners streaming in 19 different languages.

At the time, ESL One Cologne was the biggest CS:GO event ever with 27 million unique viewers and a peak of 1.3 million.

LANXESS Arena, Germany’s largest indoor venue, hosted the tournament, which represented a major breakthrough for CS:GO as it pursues League of Legends.

Only a few months previously, ESL One Katowice had set a record with one million concurrent viewers, but Cologne’s tournament cruised past that.