Our top five goals in Europe's elite club competition - which is your favourite? 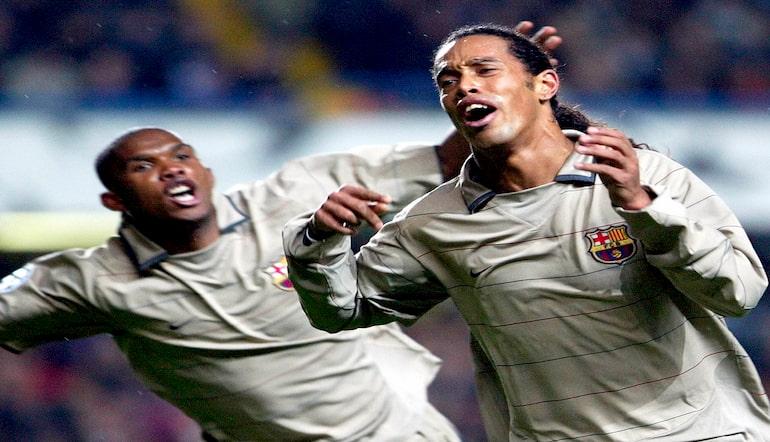 The best players playing against each other with the highest stakes of all produces moments of magic.

The Champions League is the pinnacle of club football, it generates drama, on-field wizardry and controversy. It is the only competition – apart from the World Cup – where we see the best take on the best.

Throwing all that talent into one competition naturally translates into some outrageous football. As we look at the greatest goals in Champions League history, there’s freakish athleticism, textbook technique and rude skill.

For all the frustration with talk of restructuring the Champions League, these goals remind us of the joy this competition provides, starting with a Liverpool legend…

Liverpool needed a win to book their place in the last 16. Rivaldo had been brought down and converted the free-kick to put the Greek side ahead, Liverpool required three to progress.

Goals from Florent Sinama Pongolle and Neil Mellor made it 2-1. With the clock ticking towards injury time, Anfield was tense, the possibility of a group stage elimination was real.

Thankfully for the Kop, Gerrard was on hand to save the day. Mellor teed up the midfielder, the ball bouncing towards him around 25 yards from goal. Gerrard sprinted towards it, head over the ball and drove it with net-bursting power into the bottom-right corner.

Liverpool’s place in the last 16 was secure. They went on to win the Champions League in Istanbul a few months later. Who knows how different Gerrard and Rafa Benitez’s careers look if that goal doesn’t go in.

Chelsea and Barcelona have treated us to some epic clashes down the years.

Their 2005 round of 16 matchup was one of the best of the lot, the match flowing end to end at Stamford Bridge. There was world class talent all over the pitch, and none were better than Ronaldinho.

The Brazilian superstar was at the peak of his powers. Receiving the ball outside the Chelsea box, he paused in the manner that only the greats can do.

Chelsea’s defenders were close, none dared move closer to him as he’d breeze pass. Ricardo Carvalho narrowed the angle, closing his legs to prevent an embarrassing nutmeg.

Ronaldinho twitched his right foot, tempting the defenders into a lunge. None jumped at it. He then prodded the pall with the same boot, firing past a helpless Petr Cech into the corner.

Does Ronaldinho make it into our all-time Champions League XI?

A bicycle kick? Against Barcelona? From 30 yards? Yes, that’s what Mauro Bressan did when Fiorentina welcomed Barcelona to Tuscany for a group stage thriller in 1998.

The ball bounced well above head height in no-man’s-land outside the area. A scrappy patch of the game was blessed with one of the most astonishing goals ever seen.

Bressan’s shoulders were facing the goal initially and he shifted his body shape in preparation for a bicycle kick that was barely conceivable.

A swing of the right boot and the ball flew into the far-top corner. There was nothing Francesc Arnau could do.

That wasn’t the end of the thrills for the Italian crowd, mind. Luis Figo equalised for the visitors five minutes later, before Rivaldo gave Barca the lead in the 43rd minute.

A quick brace from Abel Balbo after the break put La Viola ahead but Rivaldo snatched a point for the visitors late on as both teams progressed to the last 16.

An all-time great player. The biggest match in club football. A ridiculous goal.

The Champions League final between Real Madrid and Bayer Leverkusen was 1-1, it was almost half-time. The 50,000 strong crowd at Hampden Park was about to witness something extraordinary from Zinedine Zidane, four years after his lone Ballon d’Or.

Roberto Carlos made a typical run down the left. Under pressure, the Brazilian centred the ball with a loopy cross. The ball dropped to almost exactly on the edge of the box.

Zidane waited patiently for it to fall out the spring sky. Moving his feet into place and shaping his body to allow his left boot to strike cleanly through the ball.

It came off. It was perfection. Hans-Jorg Butt threw himself at it, but there was no stopping that.

A match best known for Andres Iniesta’s late winner and Chelsea’s fury at Tom Henning Øvrebø, Michael Essien’s wonderstrike in the first half of the second leg was sadly overshadowed.

Even Didier Drogba’s rant at the television camera is remembered more widely than Essien’s absolute thunderbolt.

The Ghanian’s goal should be remembered more fondly.

A Frank Lampard shot from the inside-left channel was blocked and ballooned in the air off Yaya Toure. Essien was waiting 30 or so yards from goal, and the ball dropped just in front of him, giving him a smooth run up.

No Barcelona player could beat Essien to the ball. He struck it first time with his left, the ball flying past Victor Valdes and bouncing into the goal off the underside of the bar.