The biggest upsets in FA Cup fourth round history - which shock result was your favourite? 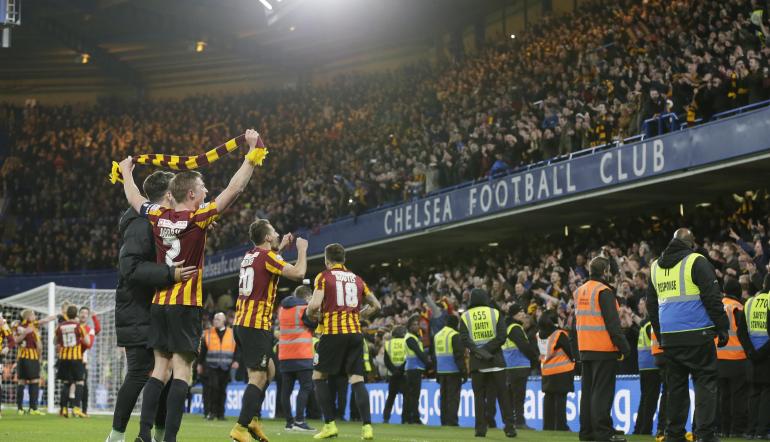 The FA Cup Fourth Round doesn’t have the same reputation for upsets as the Third Round, but maybe it should do.

Although the teams from the Premier League and Championship have already played a round, and a lot of the lower sides have been knocked out, the potential is still there for a shock or two.

FA Cup betting is a tricky business. Sometimes rotation can provide a curveball, sometimes the fancied team just aren’t at the races.

Often the underdogs have defied the odds in the Third Round and throw themselves into their Fourth Round matchup with confidence they can do it again. Predicting the FA Cup is never easy.

The five matches below are some of the greatest Fourth Round shocks in the history of the FA Cup, and one unlucky manager is on the list twice…

Chelsea going up 2-0 at Stamford Bridge used to mean game over. Most Premier League sides are out of it at that stage.

Bradford, a League One side, weren’t going down without a fight. They scored four goals, including three in the final 15 minutes, to stun Jose Mourinho’s side.

Given that Chelsea were en route to the Premier League title and named a very experienced side, this ranks as one of the greatest upsets in FA Cup history.

The Stamford Bridge faithful were left in shock. Bradford, meanwhile, were jubilant, and went on to beat Sunderland in the Fifth Round.

Even for a club always associated with drama, this was a shocking day in Chelsea’s history.

Newport County snatched a replay from the jaws of defeat at the Riverside.

Former Boro academy player Matthew Dolan scored an equaliser in the 93rd minute to take the tie back to Rodney Parade, a venue that has unsettled plenty of higher level opposition over the years and hosted a cupset in the Third Round against Leicester.

Newport outplayed Boro and were well-deserving of their eventual 2-0 win through second-half goals from Robbie Willmott and Padraig Amond.

The pair of shock wins were extremely lucrative for the League Two side, who almost dropped out of the Football League in 2017 and reformed as recently as 1989.

A 4-1 defeat to Manchester City followed in the next round for Newport, but they kept Pep Guardiola’s side quiet for 51 minutes and were in the game until Phil Foden made it 2-0 in the 75th minute.

Recent history wasn’t on Luton’s side as they travelled to Carrow Road in 2013. No non-league team had knocked top-flight opposition out of the FA Cup since 1989, when Sutton United toppled Coventry City.

Only six years before this meeting, Luton and Norwich were playing each other in the Championship, but financial issues and a streak of relegations saw Luton drop down to the Conference.

Harry Kane had chances for the Canaries in the first half, though the hosts struggled to play with any fluency. Chris Hughton chucked Grant Holt on at half-time, the threat of a replay scaring a team in a bitter relegation battle.

As Norwich chased the game, opportunities opened up for the visitors, however, and Scott Rendell scored late on to secure an historic victory.

For the second season on the bounce, Manchester City were knocked out by Championship opponents as they lost 2-0 at home to Middlesbrough in 2015.

Aitor Karanka’s Boro boasted the best defensive record in the Championship at the time and were resolute against a talented City team.

Both of Boro’s goals came after half-time with then Chelsea loanee Patrick Bamford capitalising on sloppy defensive play and Kike securing the tie in added time. Frank Lampard struck the post for City and Tomas Mejias pulled off several superb saves.

Few sports betting experts will have tipped Boro to win at the Etihad, but they stuck to their gameplan and deserved victory against a City team that were vulnerable defensively.

The second time Manuel Pellegrini appears on this list, AFC Wimbledon’s positive approach was rewarded with the greatest day in the club’s history in the fourth round of the 2018/19 FA Cup.

West Ham’s first half was abysmal. Wimbledon, bottom of League One, were 2-0 up at the break and quickly made it three after. Pellegrini, evidently furious with his team, made three changes at half-time.

Two of them, Lucas Perez and Felipe Anderson, scored in the second half, pulling it back to 3-2. It wasn’t to be for the Hammers, though, as Toby Sibbick made it 4-2 in the final minutes to secure the most improbable for wins.

While the result was wonderful for Wimbledon, some could West Ham’s approach to this match to argue that the FA Cup is struggling.