Game of Thrones Characters in the Football World

HBO’s hit series Game of Thrones features just about every type of personality possible. There are liars, cheats, heroes, and villains. Characters can be conniving, self-centred, or morally ambiguous. They could be following a dishonourable cause for honourable reasons, or vice versa. 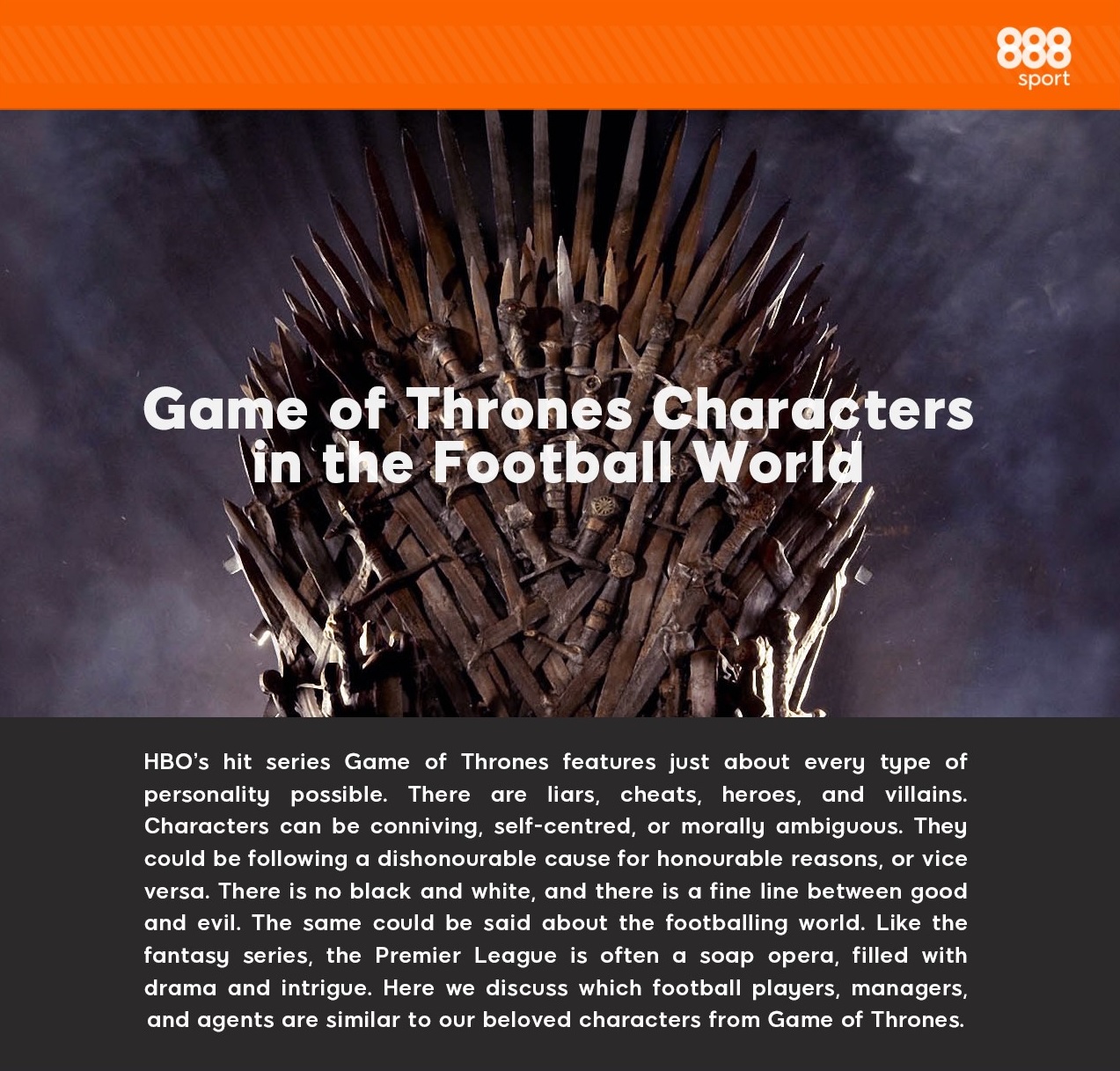 There is no black and white, and there is a fine line between good and evil. The same could be said about the footballing world. Like the fantasy series, the Premier League is often a soap opera, filled with drama and intrigue. Here we discuss which football players, managers, and agents are similar to our beloved characters from Game of Thrones.

Cersei Lannister has been playing the game of thrones since the start, and is one of the best-established schemers in Westeros. She orchestrated the death of Robert Baratheon, and since then has done everything in her power to ensure that a Lannister sits on the Iron Throne. She is widely disliked by non-supporters, and those around her dare not question her for fear of her wrath. 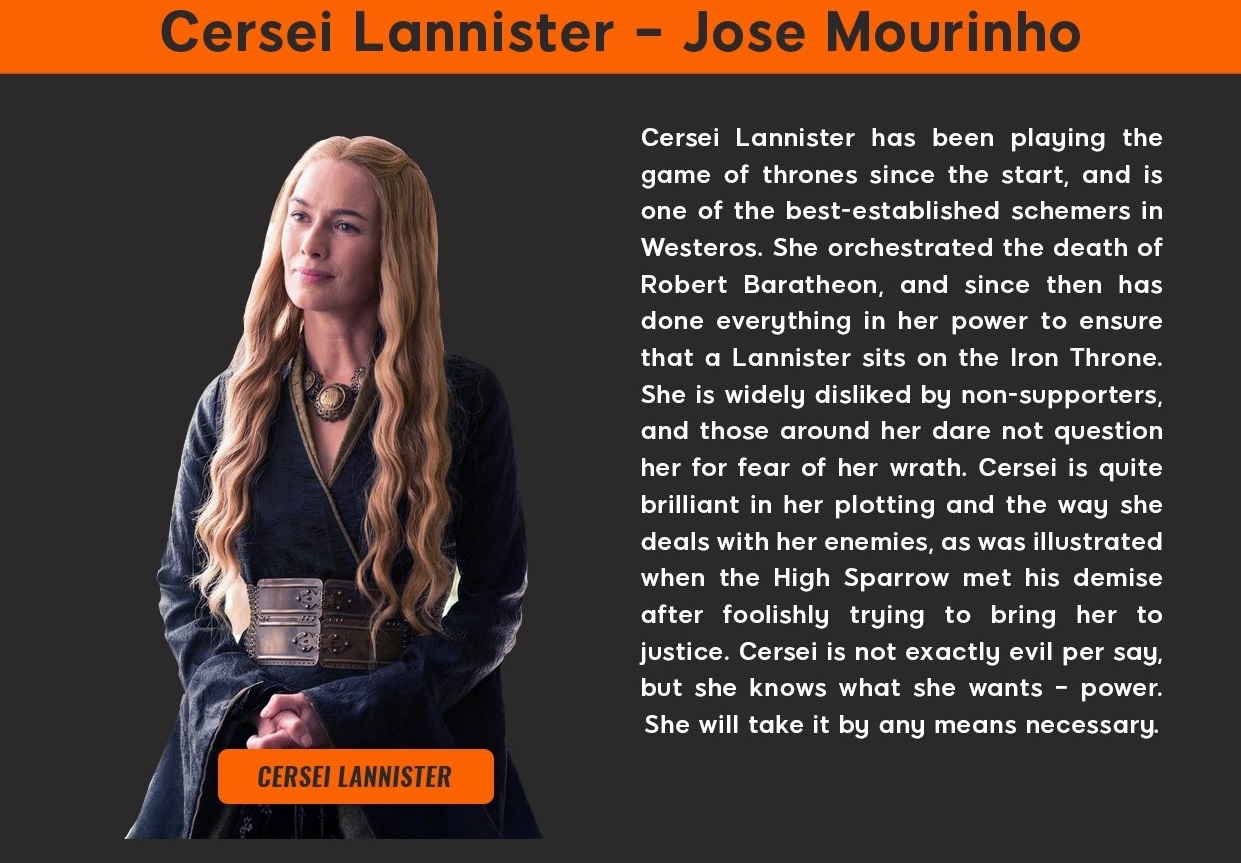 Cersei is quite brilliant in her plotting and the way she deals with her enemies, as was illustrated when the High Sparrow met his demise after foolishly trying to bring her to justice. Cersei is not exactly evil per say, but she knows what she wants – power. She will take it by any means necessary.

Jose Mourinho is similar to Cersei in many ways. He is one of the most successful managers in the business, and always seems to be operating on a few different levels. Things he says in his interviews are designed to prod the flames and anger opposing managers, he has no qualms about talking himself up and calls himself “The Special One,” and if a player gets on his bad side they can forget about making the team again. 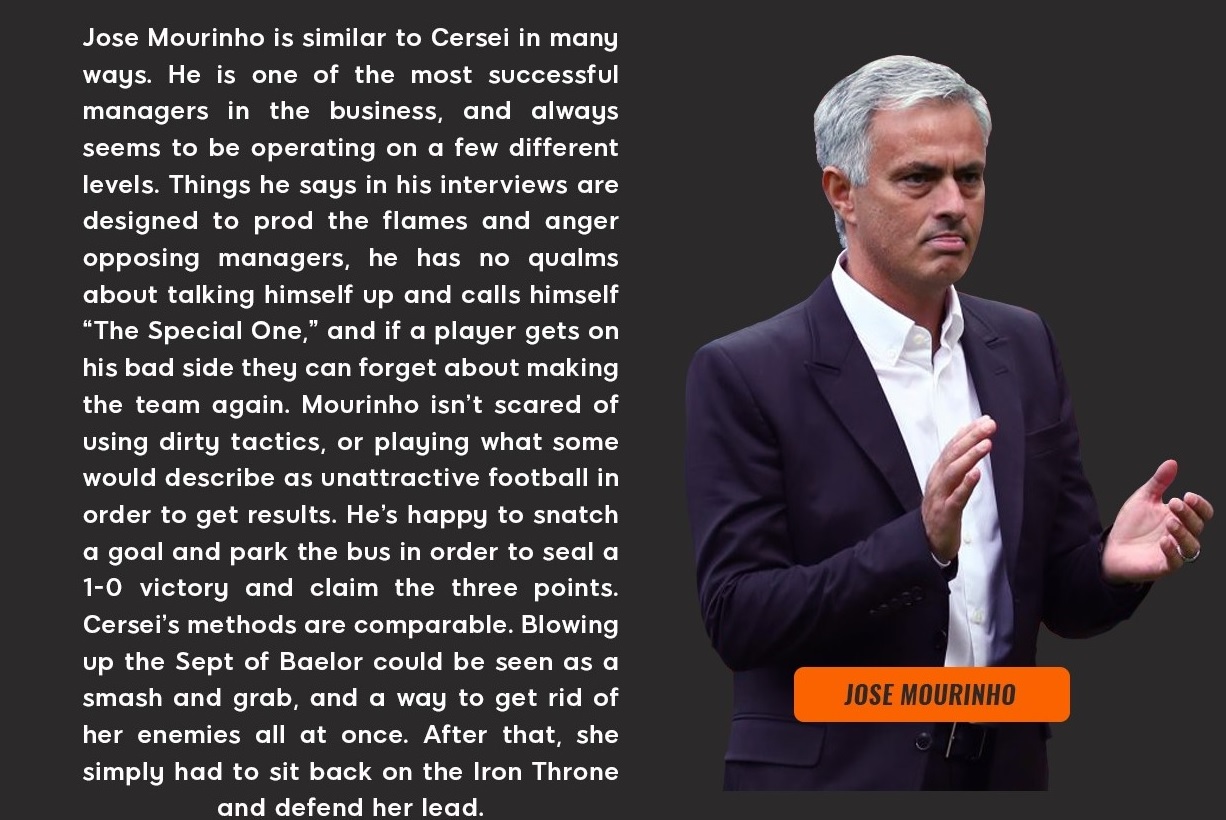 Mourinho isn’t scared of using dirty tactics, or playing what some would describe as unattractive football in order to get results. He’s happy to snatch a goal and park the bus in order to seal a 1-0 victory and claim the three points. Cersei’s methods are comparable. Blowing up the Sept of Baelor could be seen as a smash and grab, and a way to get rid of her enemies all at once. After that, she simply had to sit back on the Iron Throne and defend her lead.

Tyrion is an absolute fan favourite, and an all-round good guy. Whenever the character – who author George RR Martin supposedly based on himself – has a brush with death, viewers’ hearts are in their mouths. “The Imp” is one of the cleverest men in Westeros, which is why he has risen to the rank of Hand of the Queen to Daenerys Targaryen. 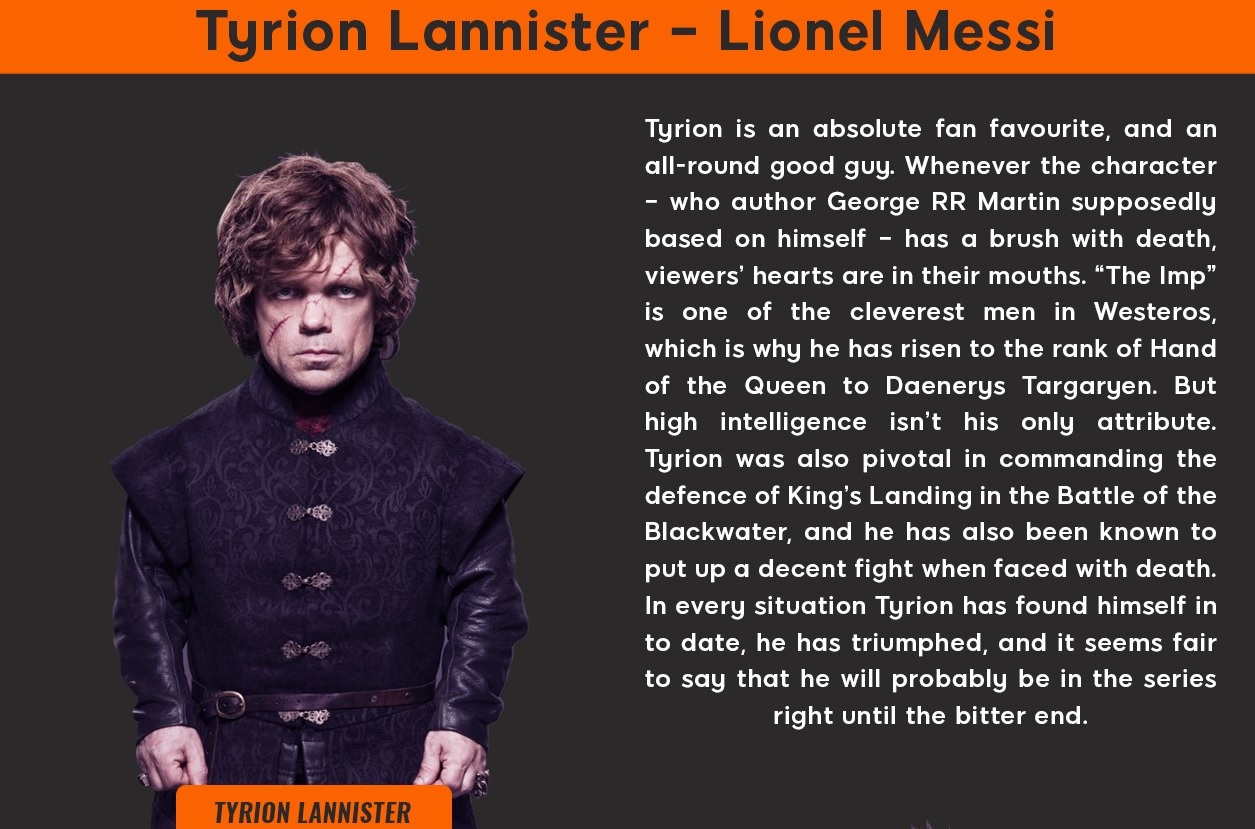 But high intelligence isn’t his only attribute. Tyrion was also pivotal in commanding the defence of King’s Landing in the Battle of the Blackwater, and he has also been known to put up a decent fight when faced with death. In every situation Tyrion has found himself in to date, he has triumphed, and it seems fair to say that he will probably be in the series right until the bitter end.

The only person he could be compared to is Lionel Messi. Messi is the best of the best in the footballing world, just as Tyrion is the number one survivalist in the harsh world of Westeros and beyond. The footballing equivalent to being named the Hand of the Queen is perhaps winning the Ballon d’Or, which the Argentinian has claimed a staggering five times. 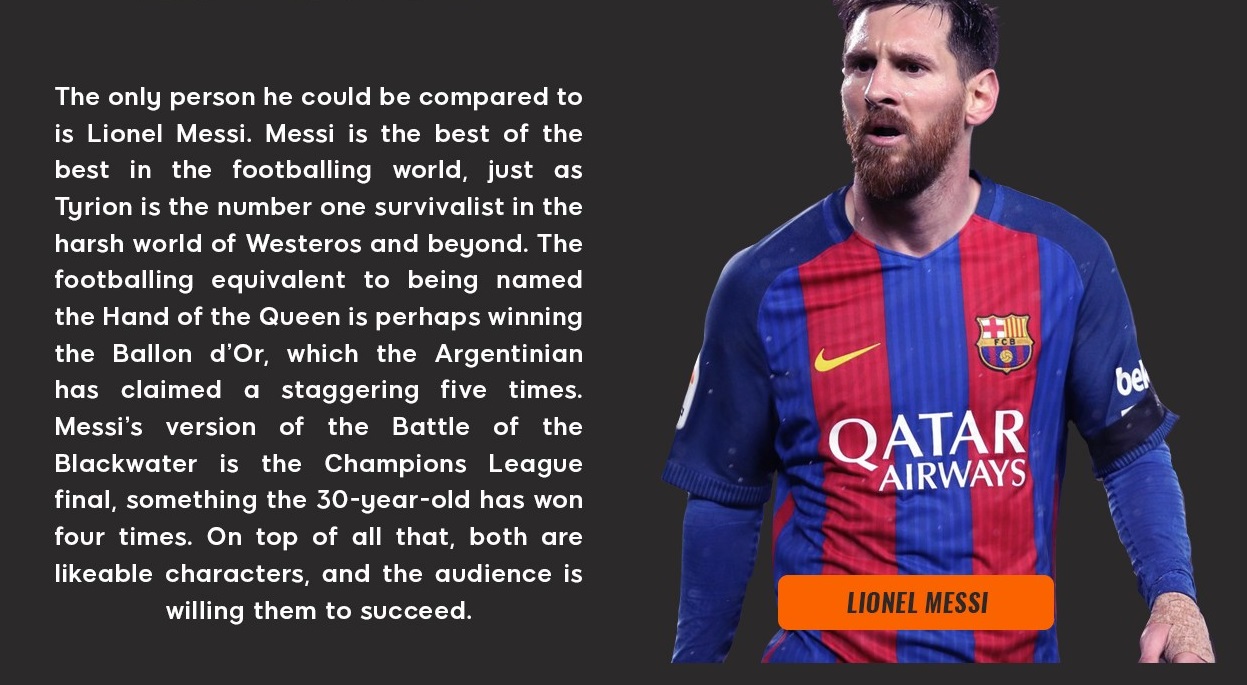 Messi’s version of the Battle of the Blackwater is the Champions League final, something the 30-year-old has won four times. On top of all that, both are likeable characters, and the audience is willing them to succeed.

The parallels between Jon Snow and Wayne Rooney are plain to see. First of all, both of them are northerners who rose to the top at a young age. Jon Snow swiftly became the Lord Commander of the Night’s Watch at the age of 16, while Rooney made his Premier League debut for Everton at the same age. 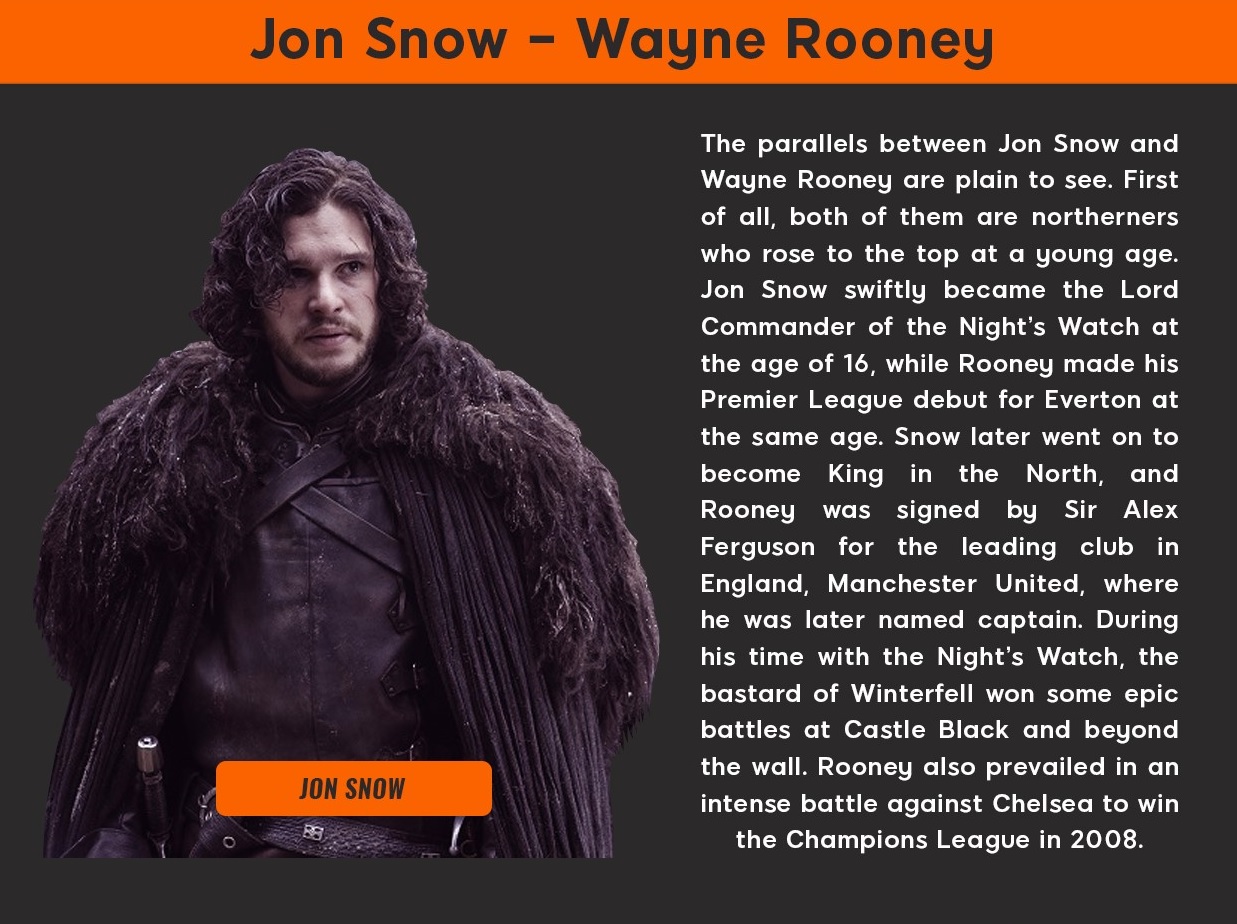 Snow later went on to become King in the North, and Rooney was signed by Sir Alex Ferguson for the leading club in England, Manchester United, where he was later named captain. During his time with the Night’s Watch, the bastard of Winterfell won some epic battles at Castle Black and beyond the wall. Rooney also prevailed in an intense battle against Chelsea to win the Champions League in 2008.

With both men, it seemed as though their careers were destined to end at Castle Black and at Old Trafford. Snow was stabbed to death by his sworn brothers, while Rooney was ousted from the first team by younger talent. 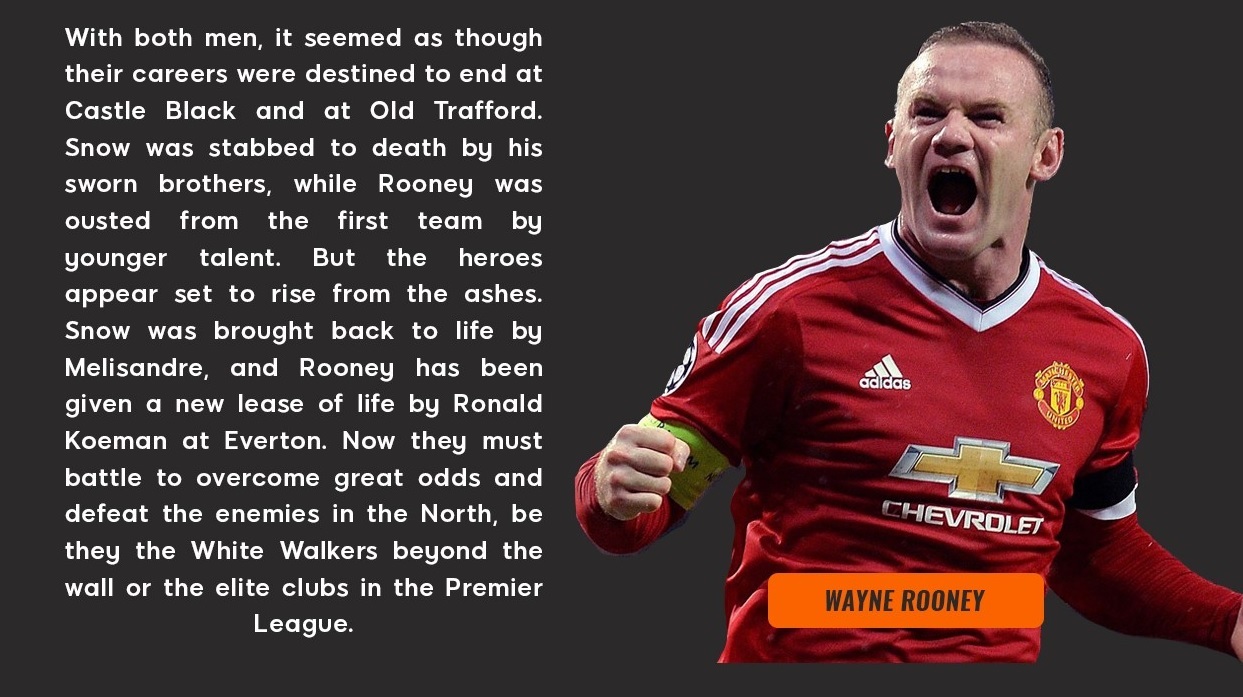 But the heroes appear set to rise from the ashes. Snow was brought back to life by Melisandre, and Rooney has been given a new lease of life by Ronald Koeman at Everton. Now they must battle to overcome great odds and defeat the enemies in the North, be they the White Walkers beyond the wall or the elite clubs in the Premier League.

Lord Petyr Baelish, otherwise known as Littlefinger, likes to operate in the shadows and go about his business unnoticed while others battle for supremacy. But he has his own agenda, and many think that he sees himself as one day being ruler of the Seven Kingdoms. 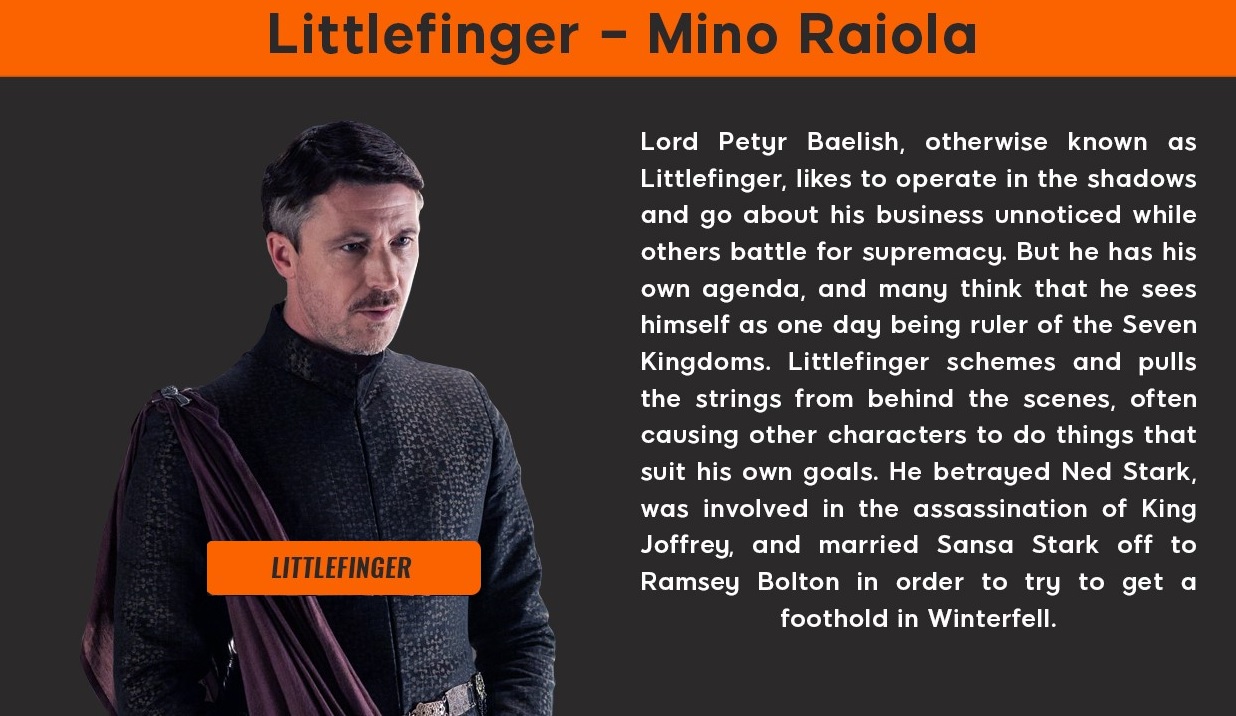 Littlefinger schemes and pulls the strings from behind the scenes, often causing other characters to do things that suit his own goals. He betrayed Ned Stark, was involved in the assassination of King Joffrey, and married Sansa Stark off to Ramsey Bolton in order to try to get a foothold in Winterfell.

In football, there is no doubt that Littlefinger would be a top agent, busy securing deals and profiting quietly. Mino Raiola is one of the biggest agents in the world, and could well be seen as the Baelish of footballing circles. The Italian has overseen some of the most excessive transfers in history, and made around £41 million when Manchester United signed Paul Pogba from Juventus. No matter what happens, even if the player is a flop at his new club, Raiola wins. He is one of the most powerful men in the game, even though many people wouldn’t know him if they saw him.

Prior to her invasion of Westeros, Daenerys Targaryen enjoyed great success on the continent. She sacked Astapor, defeated the Yunkai, and conquered the great city of Meereen. In a similar way, Pep Guardiola instantly rose to fame when he started managing in Spain at Barcelona. He mastered La Liga, and in his first three seasons in charge won the league on each occasion. 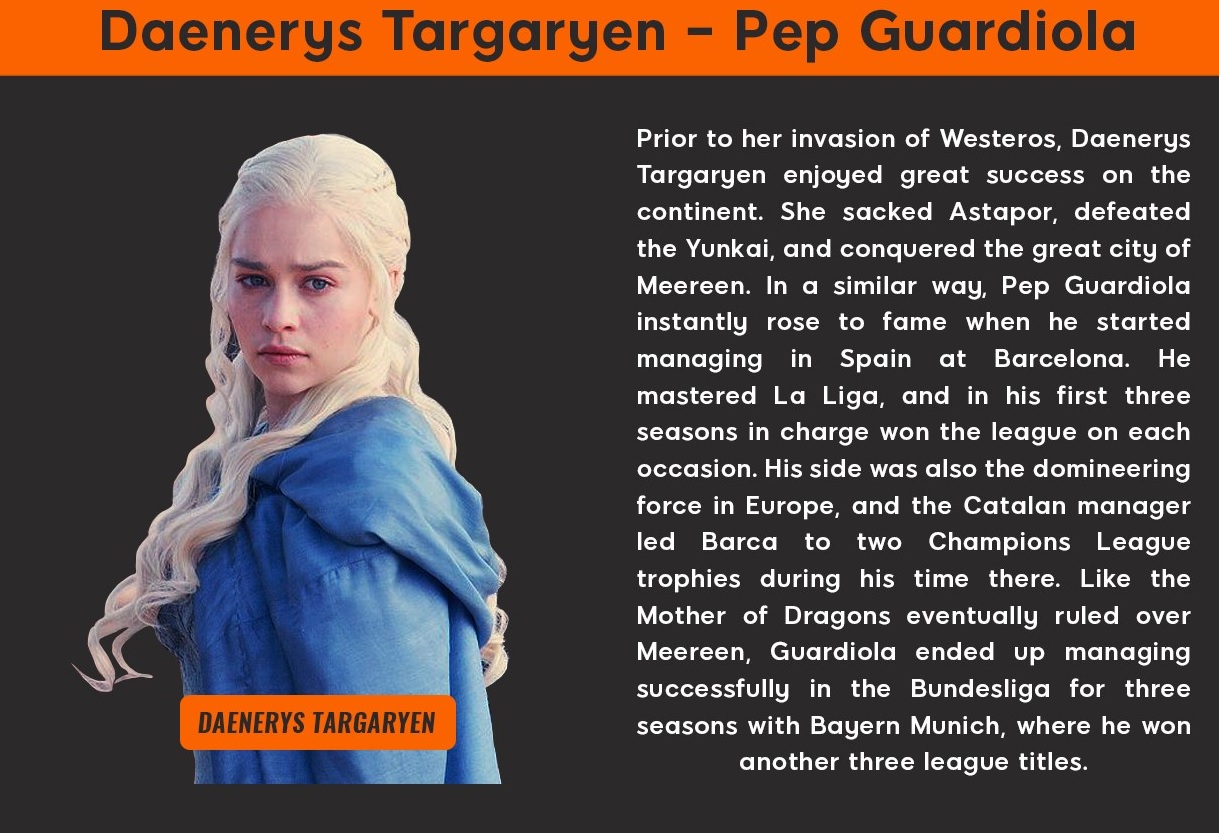 His side was also the domineering force in Europe, and the Catalan manager led Barca to two Champions League trophies during his time there. Like the Mother of Dragons eventually ruled over Meereen, Guardiola ended up managing successfully in the Bundesliga for three seasons with Bayern Munich, where he won another three league titles.

It was all plain sailing for Daenerys and Pep before they washed up on the shores of Westeros and England respectively. Both expected that with their leadership expertise and the powerful support behind them, they could instantly dominate. Daenerys thought that with her three dragons, armies of Unsullied and Dothraki, and the backing of Dorne and Highgarden she could immediately claim the Iron Throne. Similarly, Pep thought that with Khaldoon Al Mubarak’s wealth, and players like Kevin De Bruyne, Sergio Aguero, and David Silva, he could win the Premier League in his first season in England. It hasn’t turned out this way for either party, and it has actually been a lot harder than either had originally envisioned. Even so, people are still favouring them to succeed in their goals eventually.