The 10 Greatest Australian Cricketers Of All-Time

Our greatest Australian cricketers list is full of legends of the sport - but who is the best to play for the Baggy Greens? 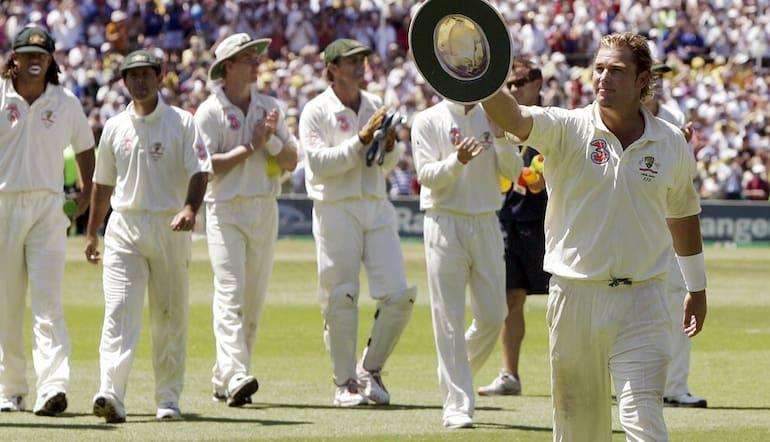 A perennial favourite when betting on cricket tournaments, the Australian men’s team has produced some of the best sides of all-time.

The 1990s and early-2000s saw the Australians become almost unbeatable in the longest form of the game, and they have been almost as brilliant in the white-ball arena with a record five World Cup wins.

For a team so often favoured in online betting, it’s no surprise that many of the sport’s greatest players have donned the baggy green. In no particular order, here are the 10 greatest Australian cricketers of all-time.

The late, great Shane Warne was a cricketing genius.

Warne was mesmeric, a master of mind-games, mixing unmatched control of leg spin with vicious lateral movement and deception.

Players of Warne’s calibre are respected around the world. Beyond that, though, Warne was adored. His once-in-a-generation ability, his approach to the game, and general attitude to life transcended cricket.

Simply the greatest batter in the sport’s history. Don Bradman’s Test average of 99.94 is almost 40 runs higher than anyone else to have 30 or more Test match innings.

The record books belong to The Don, and that’s not going to change any time soon. Bradman saw off Bodyline. He led Australia to Ashes glory. He became the yardstick for which any purple patch is now measured.

Some all-time great players have had periods where their record is Bradmanesque, but nothing more sustained than that.

What is the peak of great form for the world’s best was the norm for Bradman throughout his career.

Australia’s all-time leader in runs in Tests and ODIs, Ricky Ponting was the country’s most talented batsman since Don Bradman.

A total of 70 international centuries puts Ponting far clear of any other Australian. Playing from a strong technical foundation, Ponting could score all round the ground.

Like so many Aussies of that era, he had the attitude and skillset to score at a quick rate once he was set, and could assert himself against any bowling on any surface.

Among the most prolific openers of all-time, Matthew Hayden averaged over 50 at the top of the order in Test cricket, and almost 44 in ODIs.

Hayden put opening bowlers under pressure in a way few others have done. Standing at over six foot, he bludgeoned the ball with crunching cuts and cover drives, quickly putting opponents on the defensive.

Only the backend of Hayden’s career overlapped with the era of the highest T20 scores, depriving fans of seeing the Kingaroy left-hander unleashed in the IPL and Big Bash in his pomp.

Generally acknowledged as the most successful Test captain ever, Steve Waugh’s international career didn’t start smoothly, but he reinvented his game to become a prolific run scorer and hard-nosed leader.

Waugh finished his Test career with almost 11,000 runs at an average of over 50 with 32 centuries along the way. Only four players, including his brother, have more ODI runs for Australia.

Before transitioning to a career as a cricket commentator, Glenn McGrath was a metronome of a fast bowler.

McGrath finished his Test career with 563 wickets, the most of any quick bowler at the time. He took them at a stellar average of 21.64. To this day, McGrath is Australia’s all-time leader in ODI wickets, too.

There was nothing dramatic about McGrath’s bowling – he was not rapid, he didn’t bend it round corners like Waqar Young.

McGrath’s mastery was control and seam position, while utilising his height to get challenging bounce from a good length.

Only Shane Warne, Glenn McGrath and Nathan Lyon have more career Test wickets for Australia than the fearsome Dennis Lillee.

Without a shadow of a doubt, Lillee and his opening bowling partner Jeff Thomson were one of the greatest bowling duos ever.

A career bowling average of 24 tells just part of the Lillee story. His long run and trademark action were complemented by a ferocious competitive streak – the Perth native was an entertainer and warrior.

Taking 355 Test wickets in just 70 matches, Lillee was the record holder for the most Test wickets of all-time, though he has since been passed by numerous other bowlers.

There is little debate that Adam Gilchrist is the best wicketkeeper-batsman in the history of the sport.

Gilchrist smacked the ball to all parts as an opener in ODIs. In Tests, he averaged over 47 batting at seven, and usually scored at a rate befitting of white-ball cricket.

He could counter-attack when required to do so (which wasn’t all that often in those dominant sides). More often, he would come in and take a score from good to great, dragging the game away from the opponent.

It would be remis not to mention Gilchrist’s work behind the stumps, too. On top of his aggressive left-handed stroke-making, Gilchrist was an elite keeper, particularly when standing up to Shane Warne.

Although not keen on captaincy at first, Allan Border turned Australian cricket around from a dark period in the early 1980s.

Border brought a steely toughness to the Aussies, leading them to regain the Ashes and laying the groundwork for Australia to become the best team in the world in the following decade.

At the time of his retirement, Border had the most Test caps, most Test runs and most Test catches. He was Australia’s leading ODI appearance maker and run scorer.

While modern players have surpassed many of Border’s records, he remains 10th all-time in Test runs scored and did so at an average north of 50.

Despite a Test batting average of almost 40, statistics alone do not do Victor Trumper justice.

Plying his trade between 1899 and 1912 at the international level, Trumper had to cope with extraordinarily challenging batting wickets.

One of his greatest moments was a century before lunch in 1902, but that is just a drop in a vast ocean of brilliant Trumper performances.

He was described as a natural by many of his peers; his combination of skill and personality made him a popular figure in both England and Australia.