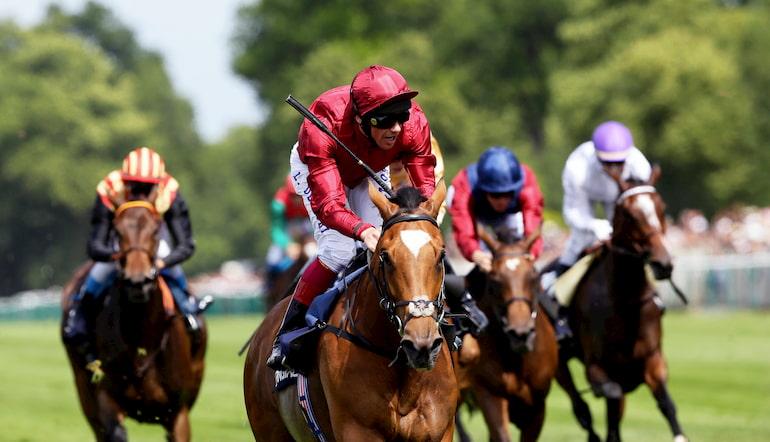 Part of the three-day Newmarket July Festival, the Darley July Cup is one of the biggest horse racing betting events of the year.

The race attracts the best horses from all over Europe and in recent years has had challengers from as far afield as Australia. However, sadly there are no such antipodean adventurers this year but there is a German challenger in the line up.

The July Cup is one of the most anticipated races on the flat racing calendar, as it often brings together the winners of races like the King’s Stand Stakes, Diamond Jubilee Stakes and Commonwealth Cup, along with horses from the 1000 or 2000 Guineas earlier in the season.

Thirteen horses go to post this Saturday and we aim to assess their prospects:

Brando is somewhat of a perennial in this race, having twice been placed and this course always seems to bring out the best in him.

He was last seen chasing home Judicial in Newcastle’s Chipchase Stakes and he still maintains a competitive edge, even at the age of eight.

He ran a couple of cracking races at Meydan over the winter before chasing Battaash home in vain in the King’s Stand at Royal Ascot.
He should be effective over this six furlongs but will do well to win a Group One.

Hello Youmzin’s victory in a thrilling Diamond Jubilee Stakes was a landmark first win at the top level for Kevin Stott and he will be hoping his superb form can continue on Saturday.

The four-year-old is now a two-time Group One winner and he could quite easily make that a third.

The Charlie Hills-trained sprinter had to settle for fourth place in the Diamond Jubilee behind Hello Youmzain but the run offered plenty of encouragement.

Namos finished fifth behind Too Darn Hot in the Prix Jean Prat last year and this year he has won two Group Three races in Germany - the highest level German sprinters can achieve on home soil.

Moser has previously saddled three winners in the UK so Namos should not be underestimated.

Oxted took the Portland Handicap at Doncaster last season before pocketing the Group Three Abernant Stakes at Newmarket in June.

This is his biggest task to date but the Teal stable is currently in excellent form.

After bolting up in Ireland, Sceptical was the hot favourite for the Diamond Jubilee but despite looking like he would go away from his rivals at the business end of the race, the four-year-old was cut down in the dying strides and ended up finishing third to Hello Youmzain.

Sceptical showed he can mix it with the very best after his meteoric rise through the ranks but the suspicion is that he’s a better horse at five furlongs than six.

Ran with credit behind Safe Voyage just last Saturday in the Surrey Stakes at Epsom and is clearly in good heart.

The jury is out as to whether the four-year-old King Power colt is good enough to make his mark in this grade however.

A likeable gelding who has managed to win four Group Two races for David Elsworth but always tends to fall short when raced at this level.

He will probably run his usual, game and gutsy race but unless several others underperform, it’s unlikely to be enough.

Golden Horde led his rivals a merry dance from the front to claim the big three-year-old prize of Royal Ascot week - the Commonwealth Cup.

Adam Kirby jumped straight to the head of affairs with him and the three year-old kept responding to his urgings before sealing victory by a length-and-a-half in the end.

Clive Cox’s star is the joint-highest rated entrant in this race and carries six-pounds less on his back than his older rivals.

He’ll probably have to steal a march on the field again here to have any chance of winning as there are some very seasoned sprinters in this.

Lord Of The Lodge (Karl Burke)

Karl Burke's colt finished second in last year's Gimcrack and kicked off this campaign by landing a conditions event at Newcastle in February.

Burke maintains that his three-year-old was inconvenienced by the ground conditions in the Jersey Stakes at Royal Ascot, so we may well see a marked improvement here and Lord Of The Lodge may be considered as a lively outsider.

Aidan O’Brien’s sole representative in the race but we are highly unlikely to see a Serpentine type shock this weekend with this three-year-old.

Winner of the Windsor Castle at Royal Ascot 2019, he was last seen finishing ninth in the Commonwealth Cup last month and it would take a massive leap of faith to back him here in his current form.

Sunday's seven-furlong Prix Jean Prat was originally earmarked for last year's Gimcrack winner, but Hannon had a change of heart, so it’s full steam ahead for the Newmarket July Festival instead.

The drop back to six furlongs may be just what the Cheveley Park-owned Threat (nap) needs.

He does not need to find a lot on paper with Golden Horde which makes him an excellent value each-way proposition in this race.

Threat’s run in the St James's Palace Stakes showed all the signs that the three-year-old is all set for a decent campaign this season and Hannon’s stay at home gamble this weekend should hopefully pay dividends.

The contest looks like being a very tight one between the recent, and decent, Royal Ascot performers – Golden Horde, Hello Youmzain, Khaadem and Threat and a permutation of those picks is highly likely to land you the forecast.