Who are the greatest horses to ever win one of the Guineas races at Newmarket? 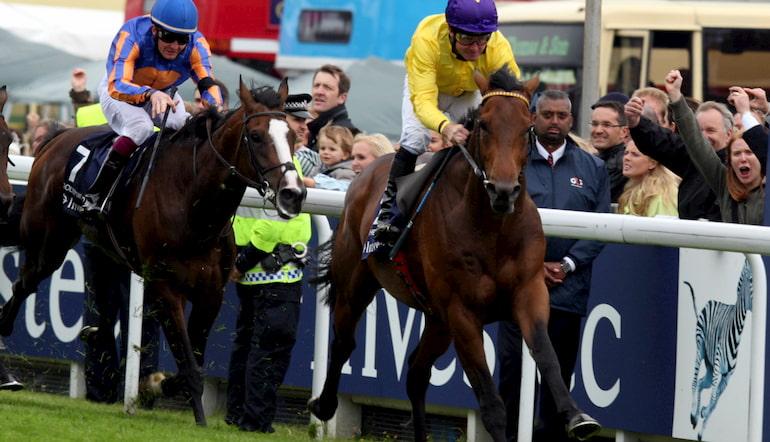 The Guineas Festival at Newmarket is the first major Flat Racing classic of the year and tends to be one the most defining moments of the year when it comes to discovering the stars of the future.

The historic 2000 & 1000 Guineas races are held in late April or early May each year on Newmarket’s Rowley Mile course.

Every year the Guineas betting markets are often very lively affairs throughout the winter months as punters try to speculate who the new crop of big names are going to be.

You can find our Guineas weekend betting tips here.

Although some horses are aimed at this race as part of the Triple Crown (Guineas, Derby, St Leger), it takes one hell of a good horse to land all three legs and those who have completed just two of the legs are still highly revered.

The rarely attempted fillies’ Triple Crown (Guineas, Oaks, St Leger) is even harder to win. Only 9 fillies have ever done so – 8 of those were before 1955. The last filly to win it was Oh So Sharp in 1985.

Which brings us onto who have been the greatest ever Guineas winners in living memory? Here are five horses who we feel are worthy of such an accolade.

The American-owned Nijinsky became the first horse since Barham (1935) to win the Triple Crown of the 2000 Guineas, the Derby and the St Leger, a feat that no horse has repeated since.

Such was Nijinsky’s racing prowess, that it took him just five starts to achieve racing immortality.

Canadian-bred Nijinsky was ridden by the champion jockey, Lester Piggott, and crossed the finish line with 2½ lengths to spare over Yellow God.

Fourteen three‐year‐olds went to post in the mile event with Piggott keeping Nijinsky on the outside as Yellow God and Amba Rama duelled for the lead. Nijinsky surged to the front after six furlongs and there was no catching him.

Bookmakers promptly made him the 7/2 favourite for the Derby straight after the race, which in hindsight now was manna from heaven for punters.

Ridden by Steve Cauthen and trained by Henry Cecil, Oh So Sharp snatched victory right on the line in the Guineas, winning by a short head.

She then went on to win the fillies Triple Crown, consisting of the 1000 Guineas, the Oaks and St Leger.

Sent off the 2/1 favourite for the 1000 Guineas, the filly appeared to have very little chance three furlongs from home, but Cauthen dug deep, tapping into all her reserves and she scorched through to force a three-way photo finish with Bella Colara and Al Bahathri.

The bookies thought Bella Colora and Lester Piggott had won it, but after a photo-finish that felt like an eternity, Oh So Sharp was declared the winner.

The “Kentucky Kid”, Steve Cauthen, still maintains that Oh So Sharp was the best filly he ever rode.

The Shadwell Farm-bred Nashwan was one of the greatest middle distance horses in a generation.

The Hamdan Al Maktoum-owned colt won the 2000 Guineas on his seasonal debut in 1989 under Willie Carson, before the pair followed up with the Derby.

Nashwan won both his starts as a two-year-old but was pretty much under the radar when it came into the run up to the Guineas.

However word spread that he was tearing up the gallops and he was backed down to the 3/1 favourite on the day, going on to win the race by a length.

He then went on to win the Derby, Eclipse and King George VI & Queen Elizabeth Stakes in what was a memorable summer for Major Dick Hern and Willie Carson.

Sea The Stars was undoubtedly one of the greatest racehorses to grace the turf since the turn of the millennium and it is pretty hard to believe that his racing career spanned just 15 months in all.

In the 2009 2000 Guineas, Sea The Stars, from the John Oxx stable in Ireland, arrived with a swooping finish under Mick Kinane to beat the 3/1 favourite, Delegator, by a length-and-a-half, with Gan Amhras back in third.

He was instantly installed as short as 5/2 for the Derby forthwith.

During his preparation for the first Classic of the season at Newmarket, Sea The Stars suffered a setback in the March and the bookmakers ultimately sent him off at 8/1 on Guineas day, suspecting he might not be quite ready.

How very wrong they were after he showed an electric turn of foot to score under Mick Kinane.

Sea The Stars went on to claim the Epsom Derby, the Eclipse Stakes, the International Stakes, the Irish Champion Stakes and the Prix de l’Arc de Triomphe over the course of the next five months before retiring with eight victories from nine career starts.

Frankel produced one of the greatest performances ever witnessed on a British racecourse when running away with the 2000 Guineas in 2011.

After already clocking up five consecutive victories, Frankel came into the 2000 Guineas as the hot 1/2 favourite and fireworks were expected.

Frankel burst from the stalls and immediately shot clear of his field. By halfway, the contest seemed was as good as over and the crowd were already clapping him home a furlong out.

Briefly he lost a tiny bit of momentum close home, but the race was already in safe keeping at that point and he ended up having six lengths to spare over Dubawi Gold and Native Khan, with a further 11 lengths back to the also-rans.

The Henry Cecil-trained superstar won a further eight races after his Guineas victory before retiring in 2012 with a perfect career record of 14 victories from 14 runs.

You can find all our 888sport ante-post betting markets for the Flat season ahead here.