Most Successful FA Cup Team – Who Has The Most FA Cup Trophy Wins?

Winning the FA Cup trophy is the dream for any aspiring young footballer but who are the most successful FA Cup teams of all-time? 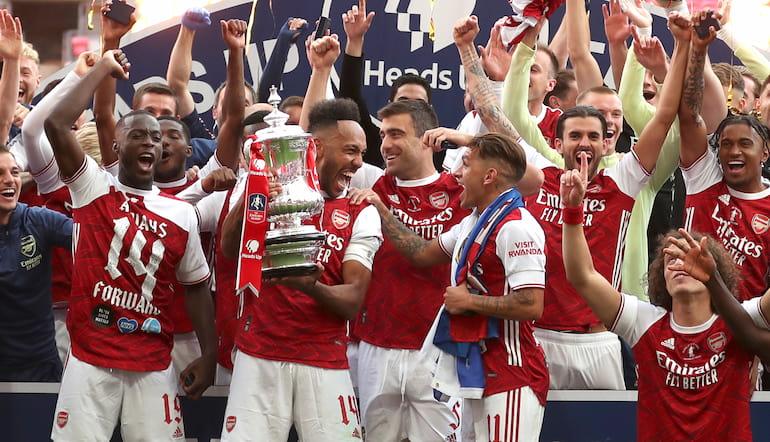 The FA Cup is one of the premier football betting competitions. From the qualification rounds through to Wembley, the FA Cup has been home to all-time surprises and some epic encounters.

It’s a notoriously difficult competition to forecast. Upsets are the fabric of FA Cup betting.

Whether a Championship team falling to non-league opponents or one of the competition favourites getting toppled by a struggling League One side, there are FA Cup upsets every single year.

Some will go down in history, creating heroes as teams make an against-the-odds run into the latter rounds.

It’s a competition with more history than any other. The trophy is as recognisable as they come. Here’s a run through of some FA Cup trophy history, records and a winners’ list.

When Was FA Cup First Awarded?

The first FA Cup was awarded in 1872. Early years of the competition were dominated by names unfamiliar to those regularly scouring football prediction tips in the 21st century.

It is the oldest cup competition in world football. The FA Cup has been contested in every year since 1872 apart from the during First and Second World Wars.

It has been tweaked. The use of replays has been altered throughout. Various venues have hosted the finals, with the Kennington Oval being used for the majority of finals in the first couple of decades.

Wembley has been the FA Cup final’s home in recent decades, but the Millennium Stadium took over while the new stadium was being built in HA9.

The FA Cup is made of Sterling silver, and the most recent edition was produced by Thomas Lyte. This was first presented in 2014 and took over 250 hours of craft.

The first FA Cup was passed between the winners for 20 years. This cost £20 to make in the late 19th century, but while in the hands of Aston Villa, it was stolen and never seen again.

A replica of this original trophy was made. This was in use for the next 15 years until a new piece of silverware was designed in 1911.

This trophy, designed by a jeweller from Bradford, is familiar to all football fans. It remained in use until the early 1990s. At which point, the FA decided it was time to protect the 1911 trophy and commissioned a replica.

The next version only lasted just over two decades. Natural wear and tear from celebrations had taken its toll, and the FA made the trophy we have seen the FA Cup winners lift in recent seasons.

Thomas Lyte made a heftier iteration of the 1911 trophy. This silverware is heavier, and generally thought to be more durable to cope with the increased workload it goes through with fans allowed to lift it as it gets toured around the country.

Crucially, the FA Cup design has not altered in over a century. The shape is distinctive, the handles on either side are almost identical to those on the trophy created in Bradford before the First World War.

All year long, football fans are making FA Cup predictions, dreaming of seeing their club lift the famous trophy. While iconic, it’s not the most eye-catching silverware in sport.

The FA Cup stands at 61.5 centimetres. This is considerably smaller than the Premier League trophy, which is over a metre tall and about the same width as the FA Cup is high.

The Gunners first won the competition way back in 1930. That was their second final, and they have appeared in another 19 since then (also a record).

Manchester United are their closest rivals to be considered FA Cup kings, having lifted the trophy 12 times. Plenty of football fans will have seen the Red Devils lift the FA Cup trophy - either live on BBC or on VIPleague or similar streaming sites.

Despite being the dominant force in English football throughout the Alex Ferguson era, Manchester United did not enjoy the same success as Arsenal have done in the FA Cup.

They have lost three FA Cup finals since the turn of the century, the most recent being to Chelsea in 2018.

Across the 150 years of the FA Cup, 23 clubs have won the competition more than once. Only three teams have won the FA Cup three seasons in a row, and both of those clubs did so before the start of the 20th century.

Unsurprisingly, Arsenal dominate the FA Cup records throughout. They are tied with Manchester United for most seasons winning the FA Cup and the league title (three each).

Arsene Wenger is the most decorated manager in the history of the competition, winning it seven times. The Arsenal legend is a topic of debate in Ronaldo7 chatrooms - could he be the greatest manager to take charge in the Premier League?