How much is Nick Kyrgios worth? A controversial tennis figure, we look at Kyrgios salary, racquet and prize money throughout his tennis career... 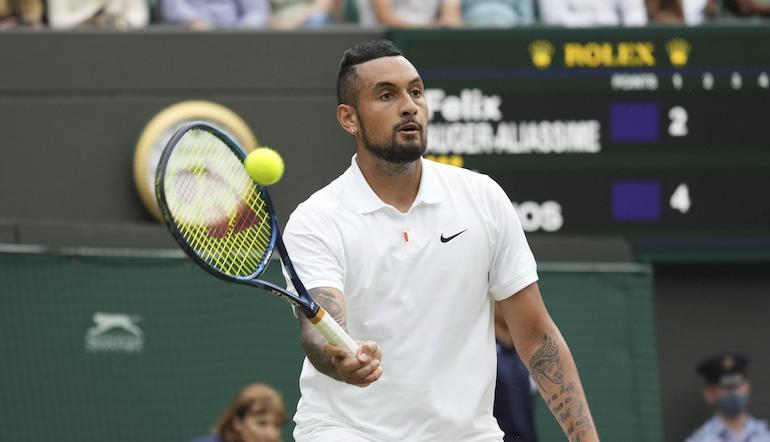 Not many players have been as controversial in tennis betting over the last decade as Nick Kyrgios. Outspoken and talented, Kyrgios has angered and entertained since becoming a professional in 2013.

He speaks his mind, he challenges the status quo, and on occasion, he produces scintillating tennis. At his best, Kyrgios can compete with most players on the ATP tour.

Despite that undeniable skill, he’s far from a reliable sports betting option. Where others might not possess the same peak performance, Kyrgios’ production fluctuates from match to match, and sometimes even from set to set.

Tennis predictions often ponder which version of Kyrgios it will be. Even experts struggle to agree on how his career will end up.

He might not be a Grand Slam winner or rivalling Novak Djokovic at the top of the rankings, but Kyrgios remains a big-time tennis topic. He’s much more information on the Canberra-born star…

How much is Nick Kyrgios worth?

Nick Kyrgios net worth is thought to be in the region of $8 million. His career prize money is just under $9 million as of July 2021, according to his Wikipedia page.

His net worth has been hit by a few fines throughout his career. There have been numerous bills of $20,000 for unsportsmanlike conduct, and he’s even been fined for leaving the court without the permission of the umpire.

The controversy is bound to follow him for the rest of his career. While he might never lift the Wimbledon trophy, Kyrgios has shown he can be a competitive player at Grand Slams.

He’s got six ATP titles to his name and got up to 13 in the world rankings back in 2016. He’s had a lot of endorsements throughout his career. A couple of those, though, cut ties with him following controversies on the court.

Many of the best men’s tennis players stand comfortably over six feet, and while Kyrgios’ 6’4 mark is well above average for the general public, there are plenty of players on the tour who are taller than him.

Nick Kyrgios uses the Yonex EZONE 98 racquet. According to tennispredict.com, the strings on the racquets used by Kyrgios are not made for commercial use.

The original specifications of the Yonex EZONE 98 are as follows…

Like most pros, however, it’s likely that Kyrgios and Yonex have worked together to modify this racquet.

There are reviews of the commercially available version of this racquet across the internet. It’s a mixed bag, but it’s clearly a racquet which Kyrgios has enjoyed using.

Nick Kyrgios is in a relationship with Chiara Passari. Like most things in Kyrgios’ life, the relationship has been very public, with leaked texts, cryptic social media posts and plenty of tabloid coverage.

The Aussie star has opted to avoid bubble life for the most part. Knowing that it’s something he’d struggle with, Kyrgios has played tennis sparingly over the last 18 months or so, but being with Passari for isolation at Wimbledon clearly helped.

Wimbledon is one of his favourite events, which obviously contributed to the decision. Their relationship appeared to go through some rocky times earlier in the year, but being together for isolation in the UK clearly made a massive difference to Kyrgios.

He said, “That’s why this week I brought my girlfriend, I brought my best friend. I wanted to bring two people that I trusted, that I feel very comfortable around, that made me feel good.”

Passari and Kyrgios’ relationship has been a rollercoaster. They deleted all Instagram photos together in early 2021, just days before posting Valentine’s Day messages.

Passari even posted a now-deleted Instagram video, which appeared to criticise Kyrgios.

She said, “Today I learnt that apparently publishing personal text messages between someone who has sent you something really abrasive and rude is more damaging to one’s well being and career than driving away and proceeding to message their best friend to ask them if they’re kicking on and then proceeding to club until 6am.”

There were rumours the relationship was over, but as of July 2021, it appears they’re very happy together again.

Nick Kyrgios has won three of his eight meetings with Rafa Nadal. One of those victories came in his first meeting with the Spaniard at Wimbledon in 2014. Nadal was the world number one, while Kyrgios was appearing in his first Wimbledon.

It was an epic performance, and a moment which had many wondering if Kyrgios was a future Slam winner. His career since then hasn’t followed quite the path that many expected, however.

Nadal has been the face of tennis video games, and he’s one of the greatest of all-time. The two have enjoyed some great duels since 2014, though Nadal has been victorious in their last two matchups.

Always active on Instagram, Nick Kyrgios has 1.7 million followers on the platform. He posts at the username @k1ngkyrg1os.

His account is mainly tennis focused, though his followers receive frequent updates from his personal life and stories are posted on a daily basis.