Pep Guardiola vs Jurgen Klopp: Who Is The Best Manager?

Would you rather have Total Football or Heavy Metal Football? It's Pep Guardiola vs Jurgen Klopp in our latest football manager debate 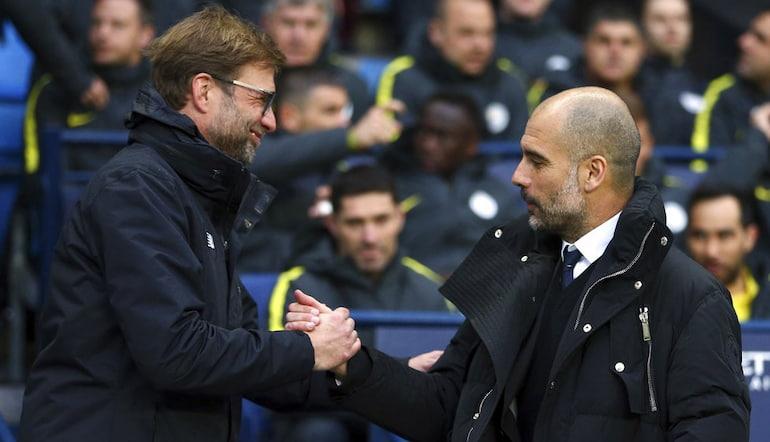 Pep Guardiola vs Jurgen Klopp - who do you want in the dugout? @SteTudor123 weighs in on the debate surrounding two of the best managers in world football...

Via different means, Jurgen Klopp and Pep Guardiola have reimagined and revolutionised modern football, each at the forefront of coaching ideals that have been widely copied across the game.

That alone is a testament to their respective genius and that’s before we even get to the 13 league titles won in domineering fashion, as well as three Champions League triumphs.

Between them, these managerial magicians have created five extraordinary football teams that have hoovered up trophies galore and all while playing fantastical football.

At least three of their creations have taken the sport to previously unchartered heights.

Unquestionably therefore, we are talking about two of the greatest football managers of all time. That’s not up for debate here. Who comes out on top however from these generational giants, is.

Mention ‘gegenpress’ or ‘tiki-taka’ these days and the response will inevitably be a roll of the eyes, so reductive have the phrases become.

Yet still, when used as shorthand to explain the two coach’s methodologies, they continue to have merit.

‘Gegenpress’ is the German for ‘counter-pressing’, a tactical philosophy that demands the ball is won back quickly in advanced positions, thereby not allowing the opposition to settle into shape.

It is a system that relies on three fast, inventive, and extremely industrious forward players, in addition to an energetic powerhouse of a midfield.

Couple all this with a well-drilled back-line and it amounts to a formidable and winning formula, as evidenced by Klopp’s Borussia Dortmund usurping Bayern Munich in the Bundesliga for a couple of years a decade back, followed by Liverpool’s more recent supremacy.

Our Premier League predictions tip the Reds to once again compete for the title in 2022/23.

‘Tiki-taka’ meanwhile is a term used – sometimes disparagingly – to denote possession-based football, and though Guardiola has distanced himself from the description it can be stated unequivocally that maintaining possession lies at the heart of his approach.

It is an abundance of passing that has two clear purposes, the most fundamental of which is to gain control of a game and its tempo.

Once this has been achieved, the elaborate patterns of movement that accompanies the passing is designed to create ‘over-loads’ that affords a player acres of space elsewhere on the pitch.

Find that player and Manchester City – and before them Barcelona and Bayern – typically have an easy opportunity to score.

So contrasting are these two styles that they lend themselves to analogy. It has often been said, for example, that Klopp’s sides play heavy metal football, while Guardiola’s teams are concertos.

Another metaphor has one seeking to bulldoze its opponent, the other dismantling them brick by brick. All of which means it is always a fascinating proposition whenever these very different creations meet.

During their time in Germany – with Klopp’s two-time title-winners Dortmund by now a fading force while Guardiola’s Bayern were on the rise – the spoils were shared from their encounters, with four wins apiece.

The Catalan ultimately won the wars however, claiming the Bundesliga for three seasons running.

Such successes can partly be attributed to the Bavarian giant’s vaster resources and at Manchester City too, Guardiola has been furnished with enormous wealth, leading to accusations that he is a ‘chequebook manager’.

Yet Klopp has been afforded considerable funds also since arriving at Anfield in 2015, breaking his club’s record transfer fee on several occasions.

A year later, Guardiola, the Catalan Grandmaster came to East Manchester, and though he soon-after turned City into ‘Centurions’ – winning the Premier League with 100 points in 2018 – against Klopp’s Liverpool he initially struggled, winning only one in seven meetings.

That trend has consequently reversed with the Reds’ heavy metal regularly quietened in more recent clashes.

Even so, overall Klopp boasts ten career wins to Guardiola’s nine from their personal duels and no other coach in world football has got the better of Guardiola more often. Only Jose Mourinho even comes close.

It is a rivalry that has propelled their clubs to record-breaking feats, resulting in a duopoly at the top that is unlike anything witnessed before in English football.

Remarkably, since the beginning of 2018/19, only a single point separates Manchester City and Liverpool, and such is their dominance they have averaged 89.5 and 89.25 points-per-season respectively.

Pertinently, City win out handsomely for titles won though with four during Guardiola’s reign to Klopp’s single success in 2020.

Unsurprisingly, both behemoths head our Premier League Odds odds for next term. Feel free to flip a coin.

If Guardiola has the bragging rights wrapped up for leagues won, where he falls short is in Europe, with his tauonic adversary lifting the Champions League in 2019 plus reaching a further two finals.

Guardiola’s failure to land the continent’s biggest prize is often used as a stick to beat him with and this has persisted, first at Bayern and currently at City.

Prior to both, however, was Barcelona and the construction of what some claim is the finest club side in history.

With Lionel Messi residing on another planet and the likes of Xavi and Iniesta carving out ever-more intricate passing patterns, Barca were all-conquering domestically and abroad, twice raising the jug-eared trophy, both times in sensational style. 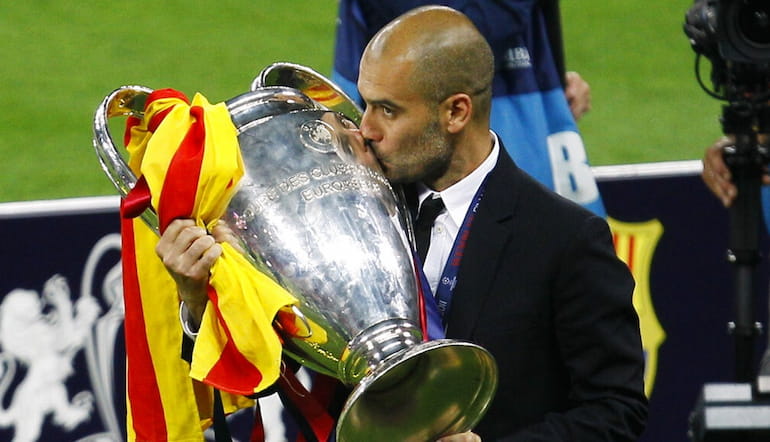 It was here that Pep Guardiola established himself as an innovate coach of very rare distinction.

Furthermore, if his Champions League track record is somewhat blemished, his league C.V. is little short of phenomenal.

In 14 years of management, Guardiola has only failed to lead his team to a title on three occasions. Pointedly, meanwhile, he has won 33 major honours to Klopp’s ten.

At the risk of stating the obvious, if you’re a fan of online betting never, ever back against Pep Guardiola succeeding.

When both men retire from the technical area their impact on modern football will still be felt on almost every pitch, so great has been their influence, with at least one of the sides involved committing to a high-press or passing out from the back.

Indeed, it is an influence that extends to every facet of the game because when football betting online no longer do we simply defer to form anymore.

Now we consider how Team X will deal with the front-foot defending of Team Y. But will Team Y even get the ball off Team X, with their superior possession?

Granted, these philosophies did not originate from Klopp and Guardiola, with Arrigo Sacchi and Johan Cruyff deserving much of the credit, but the supreme manner in which both men have married these ideologies with the frantic demands of the modern game will ultimately be their legacy.

They took the best of the past, eradicated the flaws, and made them nigh-on perfect.

As for who wins out in this managerial duel of duels, it’s admittedly close but surely Guardiola’s sublime feats at Camp Nou tips the balance? A greater number of trophies won cannot be overlooked either.