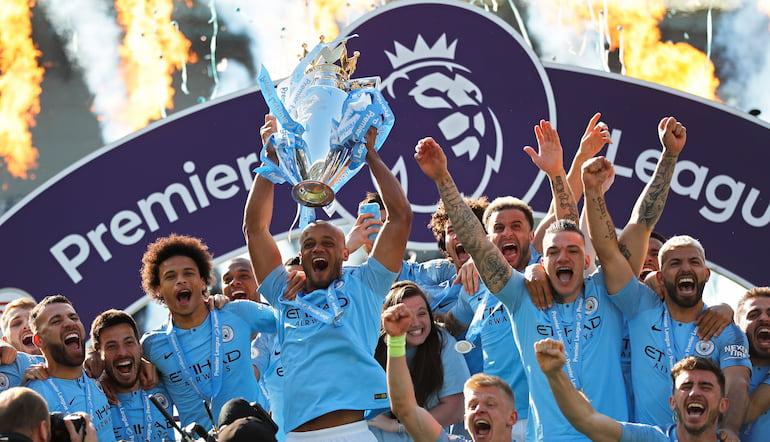 The Premier League trophy is one of the most iconic in football – any manager who can lead his team to Premier League glory has their name forever written in the annals of football history.

The preseason Premier League football odds are one of the most popular betting markets.

From Leicester’s 5000/1 upset to odds-on favourites aiming to break records, football fans around the globe are looking to predict the eventual winner of the Premier League trophy.

There have been open-top bus parades aplenty. Cities have partied for weeks thanks to the trophy which represents supremacy in English football.

It has been a symbol of invincibility, of footballing perfection, and on multiple occasions, the reward at the end of a day of the greatest sporting drama.

The Premier League trophy has meant so much to millions. Here’s everything you need to know about one of football’s greatest pieces of silverware.

When Was The Premier League Trophy First Awarded?

It might be neck and neck for the honour of most successful club in England, but Manchester United are the undisputed kings of the Premier League era.

The Premier League trophy was introduced for the start of the Premiership era in 1992/93 – Manchester United lifted the trophy in spring of 1993.

The success of 1993 was the first of four titles in five seasons for the Red Devils. Alex Ferguson’s reign of dominance was just beginning, however, as United won four more titles between 1998 and 2003.

United’s glory years featured some of the best players English football has ever seen. While not all of the best midfielders in Premier League history had the chance to lift the trophy, many were fortunate to win it on multiple occasions.

Gerrard is universally thought of as the best player of the Premier League era to not win a league title. Others in that category include Gerrard’s long-time teammate Jamie Carragher, Gareth Bale and Gianfranco Zola.

The current edition of the Premier League trophy was designed and created by the Royal Jewellers Asprey of London. Standing atop a malachite plinth base is a silver trophy with a golden crown.

The main body of the trophy, like many other sports trophies, is made of solid sterling silver. Malachite is a ‘semi-precious’ stone of which the base is made up. This has a silver band containing engravings of previous champions.

Three lions are represented by the trophy. Two gold lions sit above the handles, and according to the official Premier League website, the captain of the winning team becomes the third lion when he lifts the trophy above his head.

Ribbons from either handle are draped in the colours of the reigning champions.

A special entirely gold version of the trophy was commissioned following the 2003/04 campaign to celebrate Arsenal’s invincible season, the first in the history of English football.

The Premier League has two versions of the trophy. The genuine trophy, which belongs to the reigning champions, and a spare replica are required to enable the league to award the trophy within minutes of a team winning the title.

Should three teams be in contention on the final day (which is extremely rare), the league would also use a replica won by a previous champion.

To give other football comparisons, the Champions League trophy (which often looks enormous) is just 73.5 centimetres tall.

The FIFA World Cup is minute in comparison at only 36.5 centimetres, making it just over a third of the height of the Premier League.

The Copa America is only 77 centimetres, while the MLS Cup is almost exactly the same height as the FA Cup.

The Premier League trophy weighs 25.4 kilograms. The majority of that weight comes from the base, which features the engraving of all the previous champions – the base alone weighs 15.9 kilograms, which is over double the weight of the FA Cup.

A total weight of over 25 kilograms makes the Premier League trophy one of the heaviest trophies around.

Without the base, it is still considerably heavier than many other major trophies – the Super Bowl and NBA Finals winners receive trophies which are markedly lighter than the almost 10 kilograms the Premier League trophy weighs in at.