Can any Manchester United players break into our combined XI with Liverpool? Scroll down for our picks from these two Premier League giants. 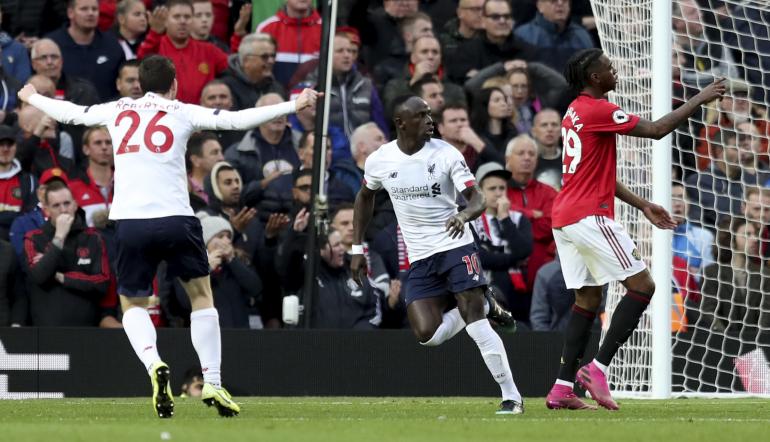 Manchester United and Liverpool are rivals on the field and off, as the never-ending argument to be England’s biggest football club rolls on.

The two northwest super clubs have had respective periods of dominance, but have had to watch Manchester City control the Premier League in recent seasons.

That looks to be coming to an end in 2019/20, however, with Liverpool on course to win their first title of the Premier League era and move to within one of Manchester United’s tally of 20.

With the two teams meeting at Anfield this Sunday, Manchester United have a chance to end Liverpool’s dreams of an invincible season, but the latest sports betting doesn’t give the visitors much of a chance.

Through the 1990s and 2000s, Manchester United would have had more than their fair share in a combined XI.

However, it is the red of Liverpool in ascendancy at the moment, though, and that’s reflected in our team. We’ve opted for a 4-2-3-1 with a somewhat surprising choice as the focal point in attack…

David De Gea’s decline has been well-publicised. Errors have crept into the Spaniard’s game. Alisson hasn’t been flawless this season, but he’s the superior of the two goalkeepers right now.

The Brazilian is great with his feet, something that’s become increasingly important in the modern game. Along with Marc Andre ter Stegen, Jan Oblak and Samir Handanovic, Alisson is one of the best goalkeepers on the planet.

Plenty of football betting markets will fancy the winner of The Best FIFA Goalkeeper in 2019 to keep a clean sheet this weekend.

His set piece delivery and creativity from the right side is second to none. Liverpool’s football is dependent on Alexander-Arnold and his fellow full-back Andy Robertson. He is Liverpool’s Dani Alves – the sky is the limit.

Virgil van Dijk might have only been runner up, but that shouldn’t overshadow the individual achievement – he’s the first defender to finish in the top three since Fabio Cannavaro won the award in 2006.

The Dutchman transformed Liverpool defensively, and the ‘best defender in the world’ title is his for the foreseeable future. Van Dijk has a complete game.

The reviews of Harry Maguire’s first half-season at Manchester United haven’t all been positive.

United’s defence has been excellent, however, and has conceded just 21.24 non-penalty expected goals in the league this season – only Liverpool have a better defensive record.

Maguire is good on the ball and has been a big part of United’s defensive improvement. He can be exposed when high up the pitch, but he’s been a definite upgrade.

Another Liverpool Fantasy Premier League star, Andy Robertson is the best left-back in the Premier League. Few players come close, and his challengers in this combined XI aren’t in the same league.

There have been few greater bargains in Premier League history than Robertson. The management of Jurgen Klopp and talent identification at Liverpool - which has led their rise to the best team in the world - deserve immense credit.

Although injured for the majority of this campaign, and under a cloud of rumours fuelled by super agent Mino Raiola, Paul Pogba is among the best midfielder players in the league.

Consistency has been an issue, of course, but Pogba at his best walks into pretty much every team on the planet.

Naby Keita is yet to make his mark on the English game so Pogba gets the nod.

Liverpool have received positive news about Fabinho’s ankle injury, which looked like a potential turning point in the title race a few weeks ago.

It didn’t turn out that way, of course, but that shouldn’t undermine the standard the Brazilian was performing at prior to his injury.

In this two-man midfield, Fabinho was competing with Scott McTominay and Nemanja Matic. It didn’t take long to choose the Liverpool star.

It is almost Premier League tradition to see Salah’s form questioned, yet he keeps delivering for Klopp’s side.

The fact that Salah is having a season like this and going under the radar reflects the standards he has set. It’s a big part of Liverpool becoming the juggernaut they are.

Much like Michael Carrick and Cesar Azpilicueta, Roberto Firmino is described as ‘underrated’ so frequently he cannot possibly be.

Still, the Brazilian no-look specialist is a wonderful footballer, and a vital component of this Liverpool attack. His role is almost unique, playing as a facilitator for Salah and Sadio Mane rather than the spearhead of the front line.

Firmino has a knack for a big goal, though, and it wouldn’t be a surprise to see him find the net this weekend.

Only five players who have played over 500 Premier League minutes this season have a higher non-penalty expected goals per 90 than Mane. Mane’s 0.24 expected assists per 90 isn’t too shabby, either.

The Senegalese forward has it all. He’s a great finisher, good dribbler and a nightmare for opposition defenders whether he’s pressing or running in behind.

There are few forwards as good as Mane in Europe right now.

Picking between Anthony Martial and Marcus Rashford wasn’t easy. Martial has been favoured as the centre forward this season, though, so it makes more sense to put him as the nine in this side.

The Frenchman has eight goals so far this year, and his 0.44 non-penalty expected goals per 90 is only 0.03 below Rashford’s number.

Martial is the better finisher of the two and looks to have found his role under Solskjaer.