Paul Scholes vs Steven Gerrard vs Frank Lampard: Who Is The Premier League’s Elite Midfielder? 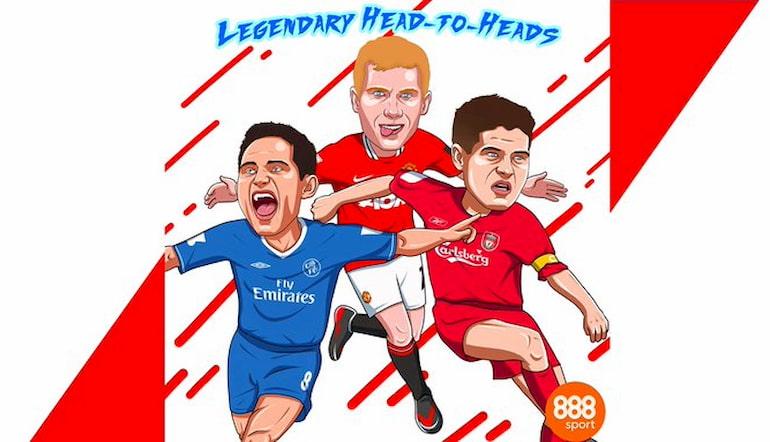 Liverpool fans will argue for Gerrard, Chelsea supporters will back Lampard and Manchester United followers will lay a case for Scholes – the fact of the matter is all three were superb players in their own right and it was a joy to watch all three stars over the years.

But when push comes to shove, who is the Premier League’s elite midfielder? It is one of the most common discussions in English football yet there is no clear and obvious answer. Even neutrals are split on the Lampard vs Scholes vs Gerrard debate.

Football betting odds couldn’t separate the three players if we had a vote on this debate. It is similar to the Lionel Messi vs Cristiano Ronaldo argument; why can’t we just sit back, relax and enjoy watching these players at the peak of their powers?

Without further ado, let’s get down to business. Here is our view on three of the greatest midfielders in Premier League history – but who do 888sport have ranked as the best of all? You’ll have to read on to find out…

If you want a passionate, charismatic leader who so often shows up in the biggest moments of all, the obvious choice is Gerrard. Time and time again, the Liverpool stalwart carried his side to glory, most famously in the 2005 Champions League final against AC Milan.

His incredible ‘cramp’ goal in the 2006 FA Cup final will live long in the memory as well. With Liverpool trailing 3-2 and only seconds remaining, Gerrard unleashed a thumping strike from 35 yards out to force a penalty shootout. The Reds went on to lift the FA Cup.

Now, critics will argue that these two moments did not come in Premier League matches – a fair assessment. However, they do show Gerrard’s knack for continually showing up on the big stage; he never failed to make an impression when it mattered most.

Gerrard’s top flight statistics are impressive to say the least. The Liverpool hero scored 120 goals and recorded 92 assists in 504 Premier League games, while also winning six Player of the Month awards. The goals started to dry up after the 2008/09 campaign though, with Gerrard hitting double figures just once in his last six seasons.

Is it possible to be regarded as one of the best players in Premier League history and still be criminally underrated? At his brilliant best, Scholes would have slotted into Pep Guardiola’s dominant Barcelona side, which is testament to his extensive skillset.

After bursting through the academy as a member of the Class of 92, Scholes made the game look simple. From a 40-yard cross-field pass to changing the pace of the game, Scholes did everything in second gear. He was the man who made Sir Alex Ferguson’s side tick for so many years – the former United boss will tell you that himself.

You could say tackling was his downfall. While Lampard was never regarded as a top tackler, Scholes had a reputation for his questionable technique. However, it was his natural ability in possession that earned him plaudits from some of the greatest figures in football.

Along with 11 Premier League titles, Scholes scored 107 goals and assisted 55 for his United teammates in 499 top flight matches. In addition, he was named Player of the Month four times throughout his career. Statistics don’t really support the Scholes argument compared to the others – watching his performances on the pitch does the job though.

Arguably the best box-to-box midfielder of all-time, Lampard was a phenomenal asset for Chelsea during his playing days. Now, he is just as influential from the dugout – the Blues legend was appointed manager ahead of the 2019/20 Premier League season.

He is the only midfielder in Premier League history to score 150 or more goals, a fantastic achievement to say the least. In addition, he notched double digits in 10 successive years before a 2013/14 campaign that was hindered by injury woes. Lampard was Chelsea’s knight in shining armour.

In terms of natural ability and talent, Lampard must go close – particularly when looking specifically at his impact on the Premier League. He changed the attacking midfielder role for future generations, with the diamond formation taking centre stage in English football after his success at the position.

Statistically, Lampard leads the way. He ranks third for all-time Premier League appearances (609), fifth for all-time goals (177) and fourth for all-time assists (102). His numbers are superior to that of both Gerrard and Scholes. Of course, you could argue that Lampard played in a more advanced role and was always going to have more chances in the final third…

Unfortunately, we’re going to have to sit on the fence with this one. You can make a viable argument for all three players and Premier League fans should simply enjoy watching past clips of these legends of English football.

Each player brings something different to the table, which is why it was a huge shame they never really clicked for the England national team. In terms of the Premier League though, all three players made a positive impact on the top flight for years to come.

*Graphics commissioned by The Playbook*