Tennis Games - What Are The Top 10 Best Tennis Video Games?

Tennis video games have been popular with sports fans for years but which of these 10 tennis games on our list ranks as the greatest? 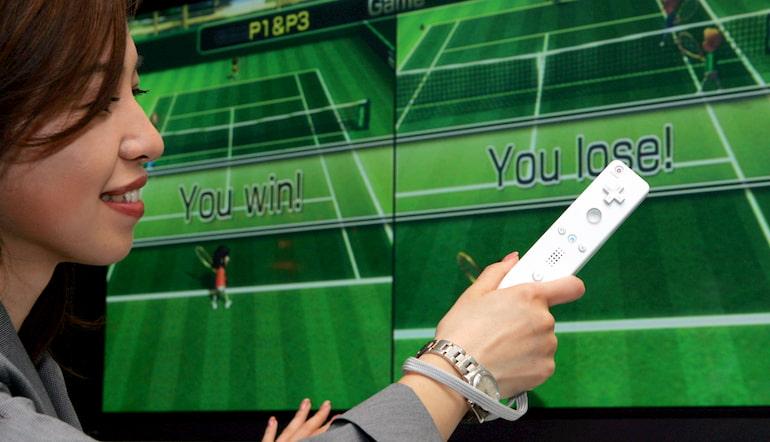 Tennis video games are yet to be mastered or monopolised in the way 2K owns the NBA market or EA has grasped the NFL with its Madden series.

While tennis betting is huge, and the sport has fans across the planet, tennis games have been inconsistent, and no developer has really taken charge to produce an annual game for fans to commit to.

From cartoony efforts to the full-on realistic simulation, tennis fans have had plenty of gaming options over the years, albeit with mixed reviews. As with so many sports, licensing has been a problem which will have put off some gamers.

We’ve gone through the best F1 video games. Now it’s the turn of tennis – here are our top 10 tennis video games of all-time.

Even though it hasn’t had the impact some expected, there’s no doubt the Wii shook up the video gaming world. It arrived with no desires to replicate reality, it was not directly challenging the established sofa-sitting consoles.

Wii Sports was a phenomenon. We all had our favourite sport, didn’t we?

The tennis was simple yet enjoyable. Your Mii moved automatically, and it was all about timing the arm swing. It doesn’t sound like it should be addictive. Wii Tennis absolutely was.

It’s not exactly the game to run online betting simulations, but Mario Power Tennis was seriously fun. A wave of colours, the classic Mario cast and explosive shots welcome a gamer on this Nintendo GameCube ace.

Mario seemed to like his tennis. Nintendo released Mario tennis games on GameCube, Wii, GameBoy and Nintendo 64. There have been a few unforced errors along the way, but there’s no doubt Mario Power Tennis was a purely struck winner.

It received universally complimentary reviews with Chris Kohler going as high as 8.5 out of 10 saying it is “best choices for tennis buffs on the market today."

Released at the turn of the century, Virtua Tennis didn’t try to achieve the impossible goal of realism. The 1999 technology meant the graphics were unspectacular, and the representation of tennis’ biggest stars bordered on offensive, but Sega went full-arcade.

Funky mini games were accompanied by easy-to-use menus and quick loading times. Sega created a tennis game which was, most importantly, fun to play.

Of course, EA Sports had a brief flutter in the tennis arena. They weren’t world number one, but Grand Slam Tennis 2 was a solid effort from the leaders in sports video games.

On PlayStation 3 and Xbox 360, this was EA’s last tennis game, released in 2012. The reviews were okay, and nothing more than that.

Like most EA games, the presentation and graphics were praised, but the gameplay was nothing special. It was a fine game for the time, though by no means a classic.

The arrival of Top Spin was a significant moment in tennis video gaming history. The first of the series came out on the Xbox in 2003 before a PlayStation 2 release a couple of years later.

Where its competitors were focusing on gameplay, Top Spin broke new ground with an in-depth career mode.

It got widespread acclaim on the Xbox. Slow loading times were the main criticism – some would argue that’s a small price to pay for a game which stood out from the rest.

Brought out on the Sega Dreamcast, PlayStation 2 and other consoles, Virtua Tennis 2 was the second in one of tennis gaming’s definitive series.

The arrival of the slice stroke might seem like a small step forward, but it revamped the gameplay experience, adding a new dimension to every rally.

Now this is a bit of a throwback. Super Tennis came out in 1991 on the Super Nintendo, but it was surprisingly smart for the early 1990s.

Reviewers noted how good the two-player mode was, and critics were universally positive. Few found any notable area to criticise of a game that was, in so many ways, ahead of its time.

The arrival of playable tennis legends was a big factor in Top Spin 3’s placing. Once again, 2K brought a game without marked gameplay improvements, too.

The main frustration for fans of Top Spin 3 was the three-year wait for the next game in the series.

If you’ve read about the top cricket video games, you will be familiar with Big Ant Studios. The Australian company jumped into a gap in the cricket market, and they did the same with tennis to bring gamers AO Tennis.

Licensing is once again a problem, but as with Don Bradman Cricket, community creations help fix that. Venues and players can be downloaded to fill the gaps.

Having licensing for the Australian Open is a big plus, though, and it looks great.

It’s baffling that Top Spin 4 is the most recent game in the series, having been released in 2011. The graphics were above average at the time, but it’s the gameplay where, once again, Top Spin excels.

The diversity of strokes, the difference in skill level, strengths and weaknesses between players, made it a captivating experience. Perhaps the only frustration was how hard it was to get good. Then again, isn’t that the joy of gaming?

True tennis fans enjoyed the challenge, and Top Spin 4 remains a popular game to this day as gamers await the next edition.

The earliest game in this article, Match Point was a ZX Spectrum game released in 1984. It was a time when developers were experimenting, seeing what they could do with sports games. Many from the time were abysmal.

Match Point was the best of the bunch. There was a visible and clear court, and while gamers only had one shot control (‘swing racket’), they could influence their shots by moving in different directions.

Fancy a punt on the French open? why not check out 888 sport