Who are the best British NFL players of all-time? We look at some of the best UK players in NFL history 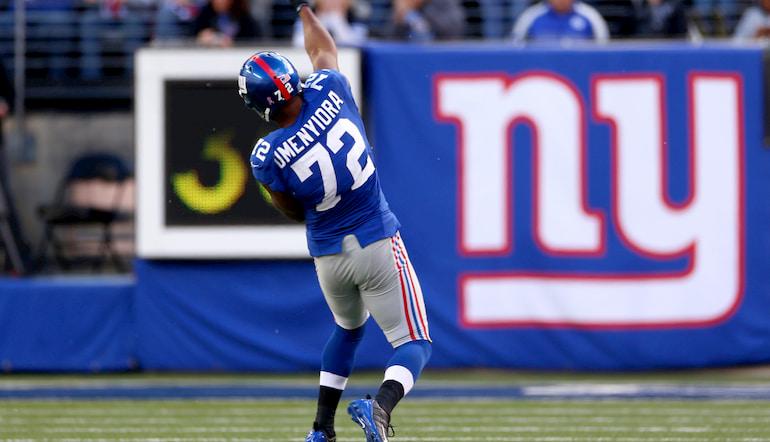 American football is on the rise in the United Kingdom and more British players are now attempting to make it in the National Football League.

Christian Wade tried and failed to break out, others have enjoyed short term success but it is very difficult for British youngsters to compete with their American counterparts.

The NFL odds for a British player to enjoy success on the other side of the Atlantic Ocean are slim but there are a few who have reaped rewards on the biggest stage in sport.

Winning the Super Bowl is the main aim for any aspiring NFL player but only a select number of Brits have managed to get their hands on the Vince Lombardi Trophy.

Without further ado, we look at five of the best British players in NFL history. Some of these stars won the Super Bowl, others missed out but made lasting impacts in the sport.

With his thick American accent, you could be forgiven for thinking Osi Umenyiora was a native but he was actually born in London before moving to Nigeria at the age of 7.

He passed through the American collegiate system after moving to Alabama and was drafted by the New York Giants in 2003, playing in the league for 10 glorious years.

During his stint in the Big Apple, Umenyiora played 97 matches and won two Super Bowl titles: XLII and XLVI – making him one of five British-born players to win a ring.

Umenyiora is the official NFL ambassador for 888sport and he can be seen alongside Jason Bell on the BBC’s NFL Show.

Following on from Osi, we have Lawrence Tynes. Tynes also played for the Giants in both Super Bowl triumphs, with Tynes taking on the important role of kicker.

Having enjoyed one of the best rookie seasons during his time with the Kansas City Chiefs, he switched to the Giants in 2007 and enjoyed six years in New York.

Tynes made 122 of 146 field goal attempts for the Giants, helping the team to two Super Bowl victories – famously stopping the New England Patriots in their pursuit of a perfect season.

The former Giants kicker will be forever remembered at MetLife Stadium and his on-field achievements are up there with the top British NFL players of all-time.

Like Osi, Jay Ajayi was born in London and he was also fortunate to win a Super Bowl ring with an NFC East team.

Playing as a running back for the Miami Dolphins from 2015 to 2017, Ajayi was traded to the Philadelphia Eagles and he was a huge hit at Lincoln Financial Field.

Ajayi helped the team reach Super Bowl LII and contributed to Philadelphia’s success with 57 rushing yards on that fateful February night in Minneapolis.

Unfortunately for Ajayi, he struggled with injuries after that and suffered a torn ACL in 2018. Still a free agent, Ajayi could yet make a surprise return to the NFL in the future.

The third Scottish-born kicker to play in the NFL, Graham Gano has been a pillar of consistency throughout his time in the league.

He enjoyed a decent college career but signed for the Baltimore Ravens as an undrafted free agent in 2009. However, he is best known for his time with the Carolina Panthers.

Gano started 121 games in his eight year career, helping the Panthers reach Super Bowl 50 but the British star missed out on a ring after losing to the Denver Broncos.

Now playing for the New York Giants, Gano may not have a better chance to win the biggest prize in the sport – that is if you believe Super Bowl odds anyway.

Selected by the Oakland Raiders in the 2012 NFL Draft, Jack Crawford has been a reliable option at the defensive tackle position during his tenure in the league.

While he has played for a number of teams throughout his NFL career, Crawford has always managed to make a positive impact – recording 112 tackles and 15 sacks.

Now plying his trade for the Tennessee Titans, Crawford will be hoping to get his hands on a Super Bowl ring before he announces his retirement in the future.

Defensive players are often overlooked but Crawford deserves plaudits for his ability to perform consistently on the National Football League stage.

NFL Betting
NFL Tips
About the Author
By
Alex McMahon