Free horse racing tips on the 2022 Cheltenham Festival. Find Cheltenham Day 2 tips on every race at the Festival! 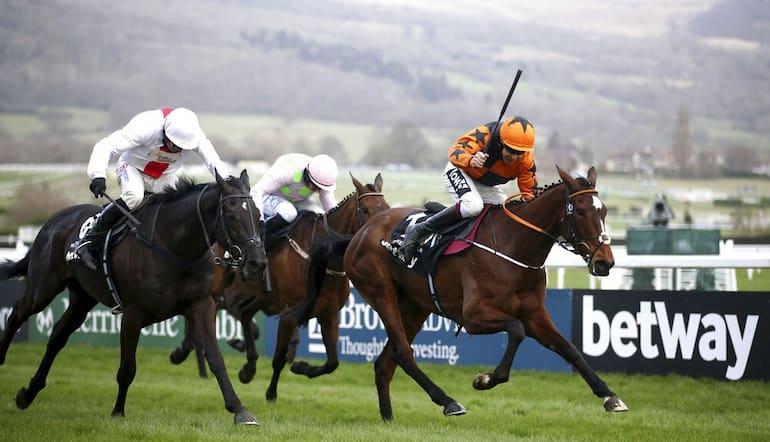 Cheltenham Day 2 tips at the Festival are popular, especially with the ladies as Wednesday is known as Ladies Day at Prestbury Park.

Fillies and mares will flock to Cheltenham in their numbers in a bid to beat the bookmakers and win some money in horse racing betting markets.

The Queen Mother Champion Chase is the highlight of Wednesday’s racing and punters will be keeping a close eye on Cheltenham Day 2 tips for betting help on the feature race.

Without further ado, it is time to check out the Cheltenham racecourse schedule and Day 2 tips at this year’s Festival. Good luck with all of your Cheltenham bets!

The decision to send Sir Gerhard up in trip could pay dividends, particularly as this doesn’t look like a vintage renewal.

Journey With Me looks more like a staying prospect while Sir Gerhard has the beating of Three Stripe Life on that Dublin Racing Festival run.

Willie Mullins has made the decision to send Sir Gerhard for this race and connections must be confident he will stay the extended trip.

At the prices, it might be worth chancing an each way bet on I Am Maximus to run into the places.

Regarded as one of Nicky Henderson’s top novice hurdlers at the start of the season, he has some decent enough form – with that run behind Hillcrest working out particularly well.

4/6
Sir Gerhard To Win or Each Way

Bravemansgame is a worthy sports betting favourite here. He’s taken to fences like a duck to water and he is undoubtedly Paul Nicholls’ best chance of a winner this week.

However, I’m willing to take him on. Ahoy Senor has a fantastic engine but will his jumping hold up? For me, there’s just too many uncertainties…

Instead, I am going to side with L’Homme Presse for Charlie Deutsch and Venetia Williams.

He was very impressive when winning the Grade 2 Dipper Novices’ Chase at Cheltenham on New Year’s Day and a step up to three miles could eek out further improvement.

One of the most competitive races of the week, I think The Shunter has a good chance at the weights.

Emmet Mullins is widely regarded as one of the shrewdest trainers in the sport and he is looking to take advantage of The Shunter’s reduced hurdles mark.

Picking the winner in a race like this is extremely tough and there are plenty of dangers in the race – with the unexposed Saint Felicien and consistent Gowel Road standing out.

Mark Walsh has been booked to ride The Shunter though and he can clinch yet another Cheltenham Festival winner for owner JP McManus.

This is Shishkin’s race to lose, right? Well, the Nicky Henderson runner is a worthy favourite but it might not be as one-sided as the betting suggests.

We know Shishkin acts around Cheltenham and is arguably better going left-handed but is he a backable price against the likes of Energumene and Chacun Pour Soi? Not for me.

Paul Townend judged it perfectly on Energumene around Ascot and couldn’t fend off the British horse but Willie Mullins will have a plan for the Festival.

The trainer has raved about Chacun Pour Soi in the build up to the meeting and he can make amends for last year’s disappointment by coming out on top this time around.

9/2
Chacun Pour Soi To Win or Each Way

Every man and his dog will be praying that Tiger Roll can emerge victorious in Wednesday’s Cross Country Chase and Davy Russell’s booking suggests that connections are confident.

Gigginstown also run former Gold Cup contender Delta Work in the race and he may be the main danger to his stablemate, though Prengarde is interesting for JP McManus.

He was the subject of a major gamble earlier in the season but we’ve seen him just once – and that was in a prep run over hurdles a couple of weeks ago.

Tiger Roll will take the roof off Prestbury Park if he wins at yet another Cheltenham Festival. The horse racing odds are on his side – are you?

This is wide open. Buddy Rich has some strong form lines but is he hardened enough to win a Grand Annual? There is a question mark over his finishing ability…

Sky Pirate won this race last year but he will have to carry top weight this time around. He sets the standard but there may be another British contender lurking in the field.

Before Midnight is my pick for this. He is ultra-consistent and his mark was left alone after finishing one length behind subsequent Grade 2 winner Funambulism Sivola.

Sam Thomas is an excellent target trainer and this will have been the plan for a while. Back Before Midnight to defy a mark of 148 in this race.

14/1
Before Midnight To Win or Each Way

I’ve been sweet on the chances of American Mike for a while now and the vibes coming out of Gordon Elliott’s yard are certainly strong.

He has followed the tried and tested Sir Gerhard bumper route this year, skipping the Dublin Racing Festival, and Elliott will be hoping that lightning strikes twice.

As always, Willie Mullins has a strong hand in the race. Facile Vega was visually impressive at Leopardstown while connections have talked up Redemption Day.

However, the form of American Mike’s win at Navan is working out well and he is one of my strongest fancies of the week.

9/4
American Mike To Win or Each Way