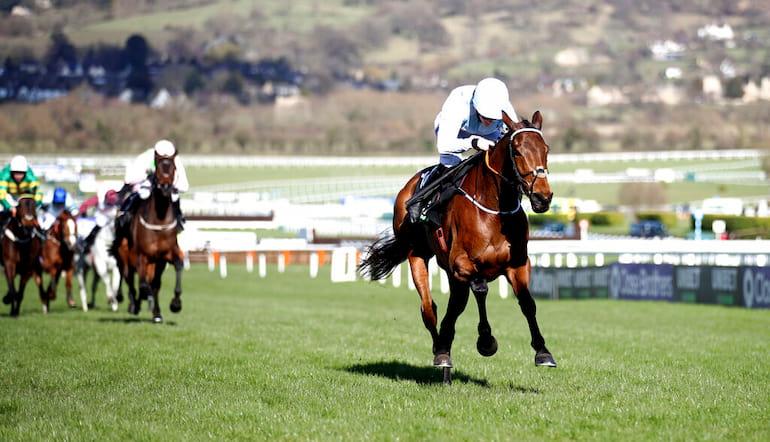 With the 2023 Cheltenham Festival looming on the horizon, the early entries are beginning to trickle through and we already know which horses have been entered for the following championship races: Cheltenham Gold Cup, Queen Mother Champion Chase, Ryanair Chase, Champion Hurdle, Mares' Hurdle and the Stayers' Hurdle.

Without further ado, here are my early thoughts on the aforementioned Prestbury Park races:

Hot favourite Galopin Des Champs is dominant in the antepost markets having won all of his four completed chases, but I’m prepared to take him on at this juncture as I’m not 100% convinced he’ll see out the Gold Cup trip.

One horse that will relish the trip is the Emmet Mullins-trained Noble Yeats, who sprung to prominence in the Gold Cup betting markets after his sensational turn of foot in the Many Clouds Chase at Aintree at the beginning of December.

Noble Yeats - what a superstar for Emmet Mullins 🏇

Noble Yeats loves @AintreeRaces & turns on the turbo to run out a brilliant winner of the G2 Many Clouds Chase under @Sean_Bowen_ pic.twitter.com/0zG22JExrh

It’s not hard to imagine this son of Yeats as a Gold Cup winner in addition to being a Grand National victor as many of the top staying handicappers down the decades have performed well in both events.

Now a general 7/1 chance in the online horse racing betting, Noble Yeats has to be in with a great each-way shout for the Festival showpiece.

The Queen Mother Champion Chase is another NRNB (non runner no bet) race with Energumene, Edwardstone and Blue Lord at the front of the market, but it is the middle named of the three that interests me the most.

Currently trading at odds of 11/4, I cannot really see that price lasting much longer should Edwardstone pick up either the Clarence House Chase or the Game Spirit Chase, or even both, before heading to Cheltenham.

He could even be the new outright favourite come Wednesday 14th March.

With question marks hanging over where the second and third horses in the Ryanair betting will run, it all really does point to another Allaho victory in this race.

Allaho is relentless once again as he powers to victory in the @Ladbrokes Punchestown Gold Cup for @CPStudOfficial and lands a quickfire Grade 1 double for @PTownend and @WillieMullinsNH 🏆@punchestownrace | #PTown22 pic.twitter.com/UXNYIkJn00

Hopes are high that he will be fit enough to bid for a third Ryanair Chase in a few weeks time and it would take a brave punter to bet against him.

Willie Mullins is looking to go straight to Cheltenham with him so snap up all the 13/8 about the Cheveley Park runner whilst you can.

For many, including me, Constitution Hill is the banker of the Festival and it would be a shock of epic proportions if he was not able to lift the silverware on day one.

Without sounding derogatory to the reigning champion and top class mare Honeysuckle, Constitution Hill is now in that much of a different league to her that he is going to make her look like a slow boat on the day I’m afraid.

Odds of 1/3 aren’t much use to your average Joe, but they are extremely useful in Cheltenham multiples.

Willie Mullins has yet to show his hand with Brandy Love this season but last year’s Mares Novice Hurdle Final winner at Fairyhouse looks just the type to take a race of this stature.

She may not be straightforward, but @WillieMullinsNH's classy mare is too good for her rivals in the Grade One contest @Fairyhouse under @PTownend, with Love Envoi a gallant second! pic.twitter.com/VAROZksWh0

Having previously accounted for the likes of Allegorie De Vassy and Love Envoi, she’s got to be of major interest here at odds of 5/1 if you’re having an early bet on Cheltenham.

The Stayers’ Hurdle has a particularly open look to it this season, hence the reason I am going to side with Jessica Harrington’s consistent gelding Ashdale Bob.

Time after time “Bob” keeps running into one and fills the minor podium spots, but he’s up there challenging the best will be suited by that long Cheltenham hill in the closing stages of this staying event. Odds of 14/1 look very appealing at this point in time.