Football Kit Costs - Which European Teams & Leagues Charge The Most For A Replica Football Shirt?

Which European clubs and leagues are most expensive for buying a replica football shirt? We investigate the cost of soccer jerseys across the continent... 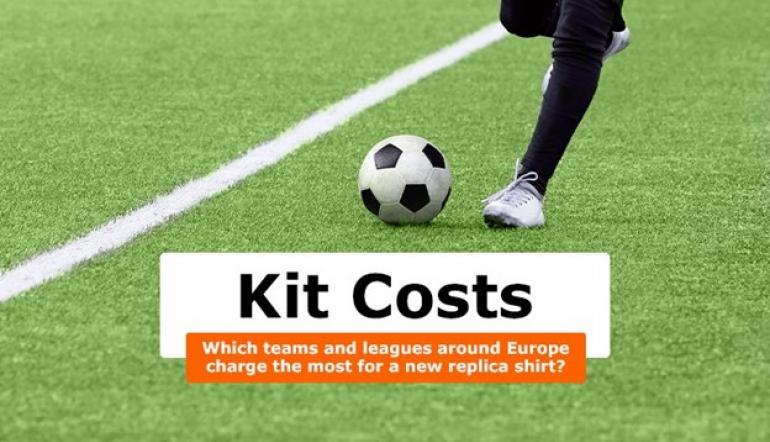 With the excitement of the delayed 2020 Euros behind us, the attention of 888sport fans quickly turns to the new season ahead, and the long-awaited return of full stadiums!

And a new season also means a new selection of replica kits for fans to spend their money on, but doing so has become an increasingly expensive ritual, especially if you’re looking to buy the away and third (and sometimes even fourth!) shirts too.

It’s no secret that new football shirts are expensive these days, but which teams, leagues and manufacturers are charging their fans the most?

Note that prices were taken as of July 2nd, when not all teams had released their new kits ahead of the 2021/22 season. 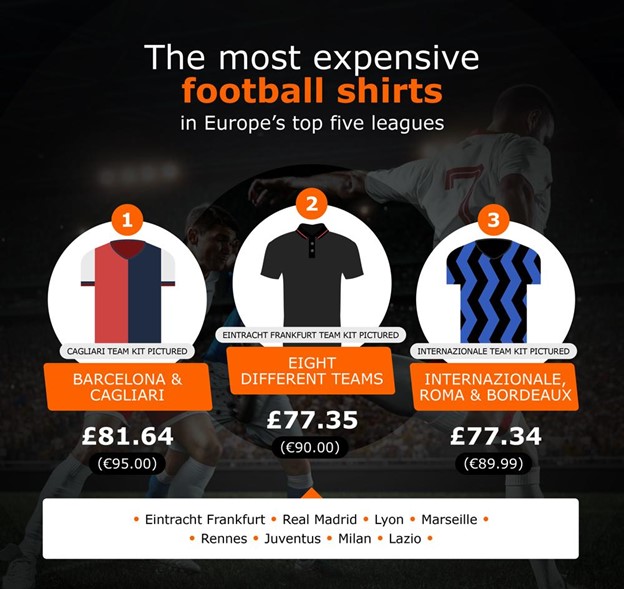 Two teams were tied for the most expensive jerseys in Europe, and while one will come as no surprise to anyone, the other is a real shock!

Barcelona are one of the most successful teams of all time and have a huge fanbase across the globe, with hugely marketable players including the one considered by many to be the best of all time, Lionel Messi.

On the other hand, Cagliari Calcio finished 16th in Italy’s Serie A last year and last won the competition back in 1970, so quite why they are charging the same as one of Europe’s elite clubs is a bit of a mystery!

The next price point down was €90 (roughly £77), which is what you’ll have to pay for a replica shirt of eight different teams around the continent.

These include footballing powerhouses such as Real Madrid, Juventus, and AC Milan, but also some slightly smaller teams, including Eintracht Frankfurt, Lazio and Lyon, Marseille and Rennes in France.

Undercutting their city rivals by just one cent are Internazionale (also known as Inter Milan), who charge £77.34 (€89.99) for a new shirt.

They’re joined by fellow Italians Roma (whose 2020/21 kit was one of the best-looking in Europe) and Bordeaux, of the French Ligue 1. 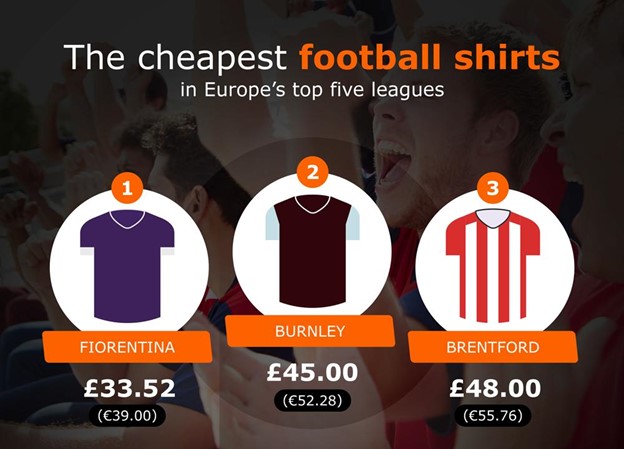 Considering the sky-high prices of kits these days, it’s surprising to see that last season’s Fiorentina shirt went on sale at just £33.52 (€39.00), especially for a team that has a relatively successful history!

While the kit itself is slightly bland, the purple color is iconic and gives the team their nickname (Viola), so avid shirt collectors could find themselves a nice bargain with a Fiorentina jersey!

Burnley have established themselves as a long-term Premier League club on something of a shoestring budget and their fans won’t need to break the bank either to buy a new replica shirt, as they currently retail at just £45, which is £25 less than the most expensive Premier League team, Tottenham Hotspur.

Another Premier League team takes third place, although this time a much newer member of the top-flight.

Brentford were only promoted last season and have yet to play a game in the Premier League, so this price refers to the shirt worn in their final season in the Championship, so it remains to be seen whether their fans will have to shell out more now that they’re in the big time.

Most Expensive Leagues For Football Shirts 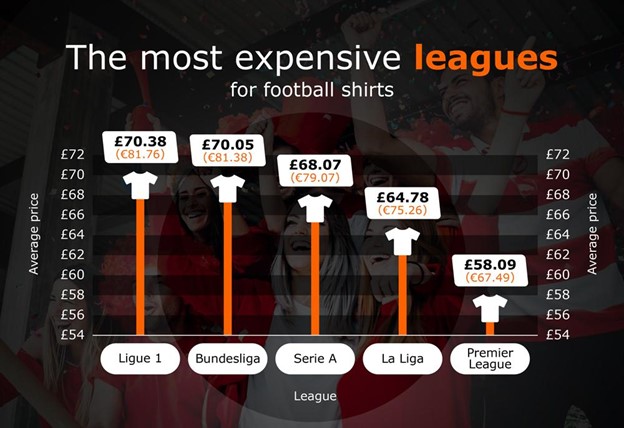 There’s only a matter of pennies in it, but despite coming in for criticism for its perceived quality on the pitch, France’s Ligue 1 actually has the most expensive football shirts in Europe’s major leagues.

While seeing PSG’s stylish Air Jordan branded kits being sold for €82.00 is perhaps no surprise, even smaller teams such as Rennes and Bordeaux are charging as much as €90!

And at the other end of the scale, Premier League fans may not realize how lucky they are, as kit prices here are actually the cheapest, although, at an average of £58.09, they still aren’t cheap!

Most Expensive Manufacturers For Football Shirts 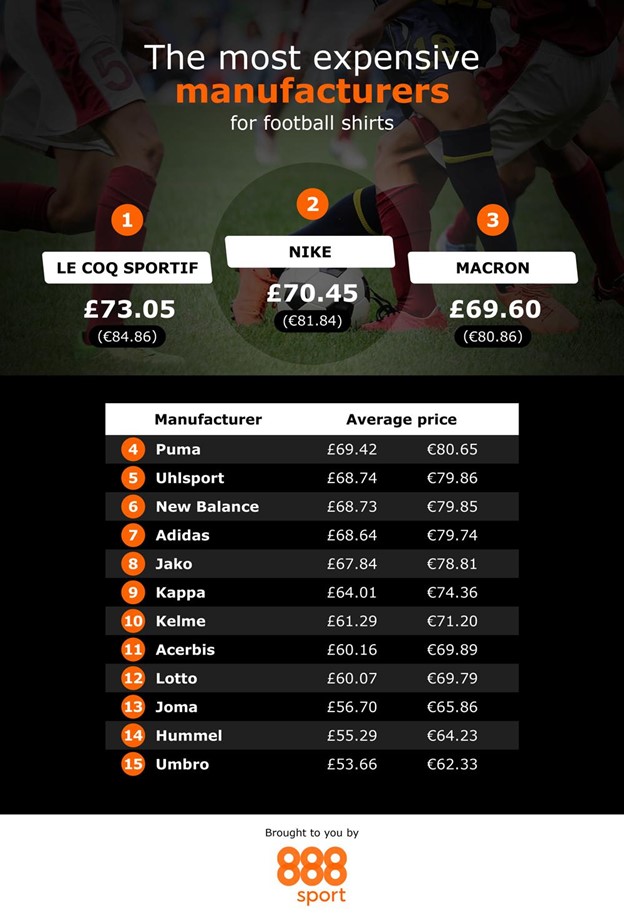 While they only make the kit for one of Europe’s top teams, Le Coq Sportif’s Saint-Étienne kit doesn’t come cheap, with a price of €85.

In fairness, it’s a stylish and understated number, with the iconic Le Coq Gallic rooster on the chest.

Arguably the biggest kit manufacturer in the world, Nike is also one of the most expensive, with an average price of £70.45 (€81.84).

Interestingly, that’s £1.80 more than their great rivals Adidas, which might not seem like a lot, but when you’re selling kits in their millions, it all adds up!

While not a particularly major manufacturer in the UK (best known as the previous kit and stadium sponsor of Bolton Wanderers), Macron make kits for lots of top clubs across Europe, most notably the likes of Lazio, Real Sociedad, and Sampdoria.

Their replica shirts were the third most expensive at an average cost of just under £70, or just over €80 on the continent.

We looked at the price of an adult home shirt for each team in Europe’s top five leagues, the Premier League, La Liga, Serie A, Bundesliga and Serie A, all sourced from the individual websites/online stores of the clubs themselves.

Research was carried out on July 2nd 2020, at which point some clubs had released their new kits for the 2021/22 season, while others were still just selling their 2020/21 kits. In either case, the most recent kit currently on sale was used, taking the full recommended retail price as opposed to any reduced/sale prices, or discounted prices for club members.

Currencies were converted using XE as of July 2nd 2021.