Doncaster racecourse is home to one of the biggest flat races in sport, the St Leger. Here is our guide to Doncaster races... 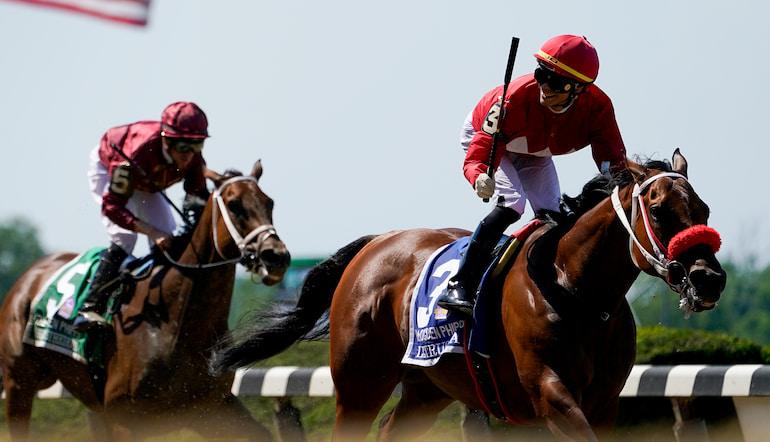 Doncaster is undoubtedly the jewel in the crown when it comes to ranking Yorkshire’s nine racecourses. It is also one of the oldest and largest tracks in the UK.

Also known as the Town Moor Course or ‘Donny’, the venue hosts two of Britain’s thirty-six annual Group 1 flat races – those being the St Leger and the Vertem Futurity Trophy (formerly the Racing Post).

Flat Racing and National Hunt racing take place making the racecourse a popular entertainment hub for all 12 months of the year.

Doncaster is unique in that it hosts the first and last turf meetings of the season, starting with the Lincoln Festival in late March/early April and closes with the November Handicap meeting.

Doncaster used to be considered the official start and end of the Flat season, but the official Flat season now starts at the Guineas Festival and finishes on British Champions Day.

Doncaster is one of the oldest centres for horse racing in Britain, with records of race meetings going back to the 16th century.

In 1600 the local corporation tried to put an end to the races because of the number of “ruffians” they attracted, but by 1614 it acknowledged racing in Doncaster was here to stay and marked out a racecourse on the land instead.

History was made at Doncaster in 1992 when it staged the first ever Sunday meeting on a British racecourse. A hardy crowd of 23,000 turned up on the day despite there being no betting.

In 2006, Doncaster saw a £34 million redevelopment to make the racecourse a world-class venue for racegoers to experience.

At the heart of the development was an impressive five-storey grandstand. The stand now includes new private hospitality suites, a wide range of places to eat and drink, plus luxury dining.

Doncaster Racecourse is currently owned by the Arena Racing Company, the largest racecourse operator in the UK.

In 2018, Doncaster welcomed its first ever Hilton venue with the opening of Hilton Garden Inn Doncaster Racecourse.

Located on the racecourse grounds, the venue comprises 154 guestrooms equipped with state of the art ‘Digital Key’ technology – a system which allows guests to unlock their rooms using their smartphones.

The venue launched in the month of September to coincide with the start of the 2018 St Leger Festival.

Doncaster racecourse is a left-handed, pear-shaped track that measures approximately 1 mile and 7 ½ furlongs round and in the main is entirely flat.

Low numbers are often favoured on the soft, especially when there is a big field on the straight course. On faster ground, the draw does not really come into play. Low numbers are best in big fields on the round course.

Doncaster holds its feature event, the four-day St Leger Festival, every September. The highlight is the St Leger itself which is officially recognised as the oldest Classic race in the world and was first staged in 1776.

Held over a distance of one mile, six and a half furlongs, it is the concluding race of the season’s five Classic races in Britain and the final leg of the British Triple Crown, with the first two legs comprising of the 2,000 Guineas and the Derby.

The last horse to win all three races was Nijinsky in 1970.

The Lincoln Handicap is the feature event on the first Saturday of Britain’s Flat racing season on turf.

It usually takes place a couple of weeks before the Grand National giving punters a chance to look at our 888sport horse racing betting and to pick out their ‘spring double’ on these two famous horse racing events.

Established in 1766, The Doncaster Cup is Doncaster’s oldest surviving race, even pre-dating the St Leger by 10 years.

Alongside the Gold Cup at Ascot and the Goodwood Cup, the trio of races make up the Stayers’ Triple Crown.

The Futurity Trophy Stakes is a Group 1 race open to two-year-old colts and fillies. Five winners from this contest have subsequently won the Derby the following year, the most recent being Camelot in 2011-12.

The training legend that was Sir Henry Cecil won this race an unprecedented ten times in total.

The two most significant races during the jumps season at Doncaster are the Great Yorkshire Chase and the Grimthorpe Chase (formerly sponsored by 888sport), which has been used as a prep run for Grand National contenders in the past.

You can find Doncaster tips here at 888sport, as well as via one of the following: Sportinglife, Racing Post, Yorkshire Post, Doncaster Free Press, Mull It Over Blog.

Check the latest Doncaster results via one of the following: Racing Post, Sportinglife, Racing TV, Attheraces.

Doncaster Racecourse has differing dress codes depending on the enclosure and fixture you attend.

Premier: The dress code for the premier enclosure and the Mallard/Lincoln restaurant is Jacket and tie for gentlemen and smart attire for ladies Strictly no jeans, sportswear or trainers. This dress code also applies to children.

County, Hospitality, Owners and Trainers & Press: The dress code for these areas is a collared shirt for gentlemen and smart attire for ladies. Strictly no jeans, sportswear or trainers. This dress code also applies to children.

Grandstand: No dress code applies for this enclosure.

All tickets must be purchased in advance. A full programme of what is coming up at Doncaster Racecourse can be found on the official Doncaster races website.