The fastest marathon runner of all-time, Eliud Kipchoge is a leading figure for the Kenyan athletics team at Tokyo 2021. 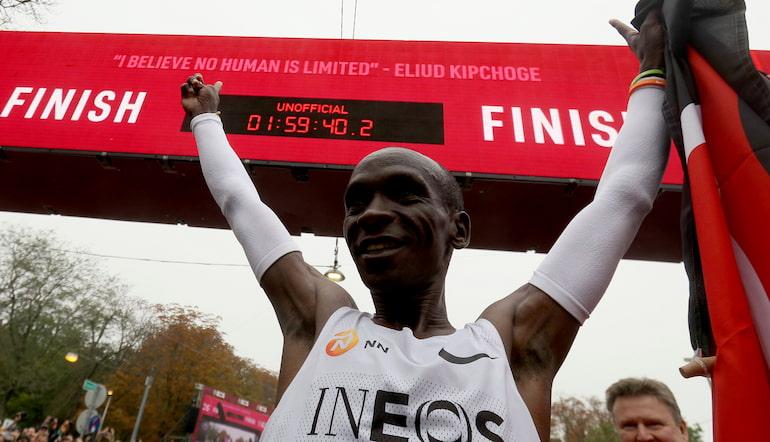 A leading figure in the world of athletics, Eliud Kipchoge is a major icon in long-distance running and is a stalwart for Team Kenya at the Olympic Games.

Kipchoge made the Olympics squad in 2004 and 2008 but missed out on London 2012 after failing to qualify for the Kenyan team.

However, Kipchoge bounced back to clinch a remarkable gold medal in the marathon at Rio 2016 and that was the highlight of the Games for many sports betting fans.

Since stepping up to the most extreme distance race in athletics, Kipchoge has found a new lease of life and he completed the Ineos challenge in under two hours.

We’ll get onto Kipchoge’s Ineos challenge story a little later. For now, it’s time to look at the Kenyan athlete and his chances of winning gold at Tokyo 2021…

While exact salary earnings are unknown, long-distance superstar Eliud Kipchoge has an established net worth of around $3 million.

Like many athletes, Kipchoge has received annual sponsorships to compete on the big stage and his official Instagram page shows several advertisements and endorsement deals.

According to reports, the Kenyan athlete agreed a deal worth seven million Kenya shillings with Isuzu East Africa – one of the largest in the nation’s athletics history.

Another Olympic gold medal could see Kipchoge’s net worth soar, especially if he manages to set a world record. Follow Kipchoge at Tokyo 2021 here at 888sport…

Who Is Eliud Kipchoge’s Wife?

Grace Sugutt has been Kipchoge’s supportive wife since the couple tied the knot many years ago and they now share three children together.

Sugutt has previously recalled falling in love with Kipchoge at 19 years old, with a traditional Kenyan wedding following just one year later.

Now, Eliud and Grace have three kids – Lynne, Griffin and Gordon – and Grace is the glue that holds the entire family together.

Grace is so much more than Eliud’s wife; she looks after the family’s commercial interests and is a competent maize and dairy farmer.

Eliud Kipchoge sent shockwaves across the globe when he became the first human in history to run a full marathon in under two hours.

Held in the city of Vienna, Austria in October 2019, Kipchoge ran the course in 1:59.40 to the delight of thousands of spectators in attendance.

Kipchoge had a team of 41 pacemakers for the challenge, with some of the best middle and long-distance athletes helping the Team Kenya legend to break the two-hour mark.

The crowd held their breath as Kipchoge entered the closing stages of the race but erupted as he crossed the line in a record-breaking time to enter the marathon history books.

Many believe that Kipchoge proved his own ‘No Human Is Limited’ mission statement to be true and his feat was akin to Sir Roger Bannister’s sub-four minute mile and Usain Bolt’s 100m world record.