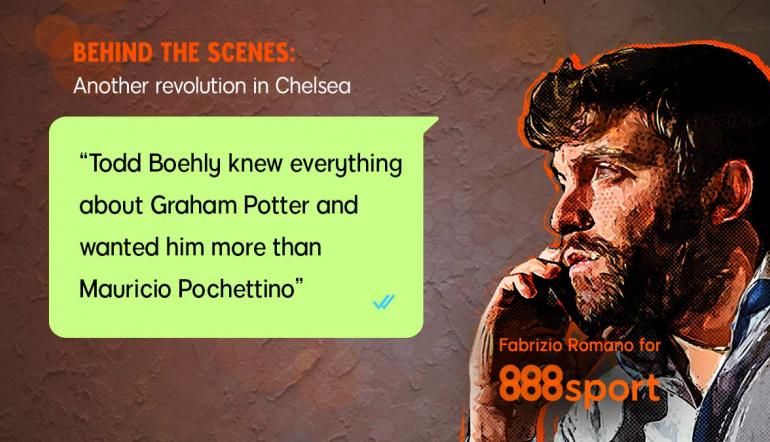 Chelsea just began a revolution with Todd Boehly in command. After the bad performance against Dinamo Zagreb came the most surprising decision: Thomas Tuchel fired, Graham Potter set to be appointed as new manager after a summer full of difficult decisions. The first, real manager wanted by Boehly who had continued the Tuchel-project chosen by Roman Abramovich and now ready to build his own long-term project with Potter appreciated as top manager for present and future.

Graham Potter will be appointed as new Chelsea manager, as expected. Agreement in place, contracts now being prepared as proposal has been accepted. Here we go. 🚨🔵 #CFC

Chelsea will complete the agreement with Brighton in the next hours. pic.twitter.com/cY7V5vdZy8

The decision first surprised Thomas Tuchel himself: the manager expected to have more time to work and improve the team after so many summer signings, but Boehly no longer believed in Tuchel's ideas given the many differences in vision during the summer. The Chelsea owner, for example, was really tempted by Cristiano Ronaldo as an opportunity offered by his agent Jorge Mendes, but it was Tuchel who turned down CR7 more than once during the summer because he wanted Pierre-Emerick Aubameyang as a striker in his new Chelsea system. Tuchel also wanted Matthijs de Ligt as new center backs, he believes the club was too slow in negotiations for the Dutch center back who then signed with FC Bayern; some discrepancies in the management of the market which were then reflected on the field.

Chelsea will appoint Graham Potter as their new coach, per @FabrizioRomano 🔵 pic.twitter.com/wnpSsSu6NV

In short, many differences in vision that prompted Todd Boehly to fire Tuchel and start a new project with Graham Potter. The new Chelsea owner was very informed about the English manager's ideas already in August when he negotiated with Brighton for Marc Cucurella: Boehly knew everything about Potter's way of working, his vision, his ideas ... It was no coincidence, because Graham had already been singled out as the perfect manager for Chelsea of the future. Because of this when Tuchel was sacked, many managers were proposed to Boehly including Mauricio Pochettino who was open to accepting Chelsea jobs as a priority. But there was no hesitation: Chelsea wanted Potter as their first choice and immediately started a negotiation with Brighton to be able to discuss directly with their manager.

From that moment everything was easy: Potter was immediately attracted and honored by Chelsea, by the insistence with which Todd Boehly wanted to entrust him with the project for present and future with guarantees also on market choices. Pochettino has been in the race but never close to Potter in Boehly's preferences, while Tuchel is still surprised by the scenario that led to his sack when it was very unexpected for him and the players. But now the future is already at Chelsea with Graham Potter poised to become the new face of Todd Boehly's project. And that's not all, because soon there will be a new director of football coming to Chelsea to start rebuilding on the market too...

Premier League Tips
Chelsea
About the Author
By
Fabrizio Romano