Faith Kipyegon is a 2016 Olympic champion and the Kenya athlete will be looking to add another gold medal at Tokyo 2021. 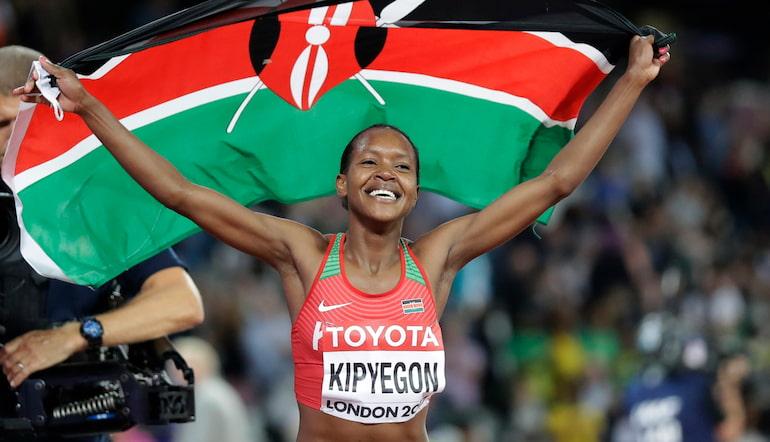 Faith Kipyegon has been a key figure for Team Kenya’s athletics squad since bursting onto the scene at the 2011 World U18s Championships.

An Olympic champion at Rio 2016, Kipyegon has won or finished second at every major event since turning 20 years old in 2014.

Kipyegon specialises in the 1500m race – an event in which Kenya have traditionally done well in at previous Olympic Games.

She recorded the fourth fastest time in history in July 2021, sending out a statement to all of her rivals ahead of this summer’s Olympics in Japan.

While Kipyegon is not a household name in the sports betting world, she has been dominant in the 1500m event and will be tough to beat in Tokyo.

So without further ado, it is time to take a look at one of Kenya’s top medal hopes for Tokyo 2021. Can Faith Kipyegon carry the weight of a nation? Only time will tell…

Faith Kipyegon was just 17 years old when she grabbed the attention of athletics fans for the first time, clinching gold at the 2011 World U18s Championships.

She added another gold at the 2012 World U20 Championships to her resume but failed to reach the semi-finals of the 2012 Olympic Games in London.

However, Kipyegon bounced back to claim victory in the junior races at the 2011 and 2013 World Cross Country Championships before finishing fifth in the 2013 World Championships – facing more experienced, senior athletes.

But it was in 2014 that Kipyegon really started to dominate the 1500m division, starting with her role in the 4x1500m relay at the IAAF World Relays in the Bahamas.

Starring alongside Mercy Cherono, Irene Jelagat and Hellen Obiri, Kipyegon helped the Kenyan team to improve the World Record time to 16:33.58.
Later that year, Kipyegon proved her mettle by winning Commonwealth gold in the 1500m in Glasgow. The Kenyan was gaining a cult following across the continent…
A year later, she won silver at the World Championships but would bounce back quickly to win the Diamond League 1 mile race – beating rival Sifan Hassan.
And then came the 2016 Olympics in Rio de Janeiro. Kipyegon was already regarded as one of Team Kenya’s top athletes but gold in Brazil cemented her status as a legend.

There was no letting up for Kipyegon in the aftermath of that Rio success and she clinched the 1500m Diamond League title the following year.

Kipyegon gave birth to her first child in 2018 but returned for the World Championships in 2019, only to set a new Kenyan record while finishing second to Sifan Hassan.

While she has lost to Hassan on more than one occasion since, 2021 has been a huge year for the Kenyan athlete – breaking the national record at two separate Diamond League meetings.

Her effort in Monaco on 9th July 2021 saw Kipyegon record the fourth fastest time in history, finishing over two seconds clear of Hassan on that occasion.

Can she replicate that remarkable performance in Tokyo? If both women bring their best form to the table, the 1500m final is going to be some spectacle.