Find all Fantasy Football Game Prizes information and updates for 2021 FPL season. read all about fantasy football tips and guides at 888 sport. 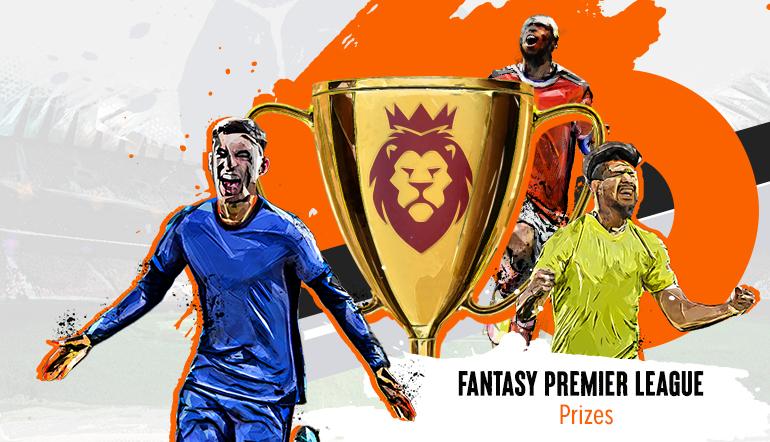 For most fantasy football aficionados playing the game is reward enough.

Should your virtual squad of 15 real-life Premier League footballers accrue a healthy points tally every gameweek you will likely top a private league and this offers up plenty of banter opportunities at the expense of your friends, colleagues or relatives who are also participating.

As a bonus, if bragging rights is not enough, it is common practice for a prize to be determined between participants before each new campaign.

This is by no means an official acknowledgement, rather a private arrangement and may take the form of a trophy, purchased from money chipped in from every player beforehand.

Alternatively, the eventual league winner may have the honour of deciding an amusing forfeit for the player who finishes bottom.

Even if mid-table obscurity awaits however, sufficient reward lies in the sheer enjoyment of competing.

With weekly fantasy football transfers and EPL Captain Picks to mull over, and seasonal FPL ‘chips’ such as a Bench Boost and the invaluable fantasy football Wildcard incentive, there is more than enough facets to this engrossing pursuit to keep a player invested for the duration.

What happens though if you exceed even your wildest expectations, and challenge at the very pinnacle of the overall league, one that includes every player across the globe?

Additionally, what about the serious fantasy football-heads, who don’t just play for fun but vie to be the very best?

Since the Premier League fantasy football game began there have been prizes up for grabs for the high-achievers and the quantity and quality of these fantasy football prizes have improved year-on-year to reflect the game’s ever-increasing popularity.

These rewards are split into categories to recognize weekly and monthly winners along with grander prizes handed out to the overall champion, runner-up and third-place finisher.

There is also an enviable package of goodies awarded to the winner of the FPL Cup. Pleasingly, the prizes available for the forthcoming 2021/22 season are bigger and better than ever before.

Each new season sees millions of us sign up to play Premier League fantasy football so it stands to reason that the player who ultimately tops the pile from this multitude deserves to be handsomely rewarded. And they are.

The overall winner of the game will enjoy a seven-night break in the UK that includes VIP hospitality at two top-flight matches played across the 2022/23 season.

There is also a week’s worth of experiences at tourist attractions gifted by Visit Britain, with travel costs and accommodation thrown in.

A Nike manager’s jacket is an apt prize for the most accomplished virtual gaffer around while a Hublot watch will ensure the winner always gets to keep referees honest.

A copy of FIFA 22 along with a games console meanwhile, offers a welcome distraction from stat-crunching for the best value left-back within budget.

Lastly, it has long been the tradition of the PFL to throw in a goody bag consisting of a rucksack, t-shirt, mug, water bottle, stress ball, pen, pad, and key ring.

This season, the runner-up will receive a similar package of prizes to the ones bequeathed to the top spot, though minus the seven days touring popular tourist sites. There is a VIP hospitality trip to a single Premier League game with two nights’ accommodation included.

Elsewhere, the desirable timepiece is reserved only for the winner. Instead, a tablet computer and Bluetooth speaker is gifted as well as the games console, jacket, and goody bag. The 2021/22 PFL Cup winner receives the same set of prizes as the runner-up.

Terms and conditions for all PFL prizes can be located on the official site. In brief summary, some flexibility is extended regarding the trip packages to factor in an individual’s circumstances. No refunds or credit however, is permissible.

For the majority of us, the dream of topping the overall leaderboard at the season’s conclusion is precisely that: a dream.

What is possible though, is to enjoy a truly outstanding week where most of our picks score goals, make assists and keep clean sheets, gaining Man of the Match awards into the bargain. In any given week this can happen. A perfect storm.

It is only right and fair therefore, that a separate rewards package is made available to recognize our brilliant – and by no means lucky - managerial acumen and it comes in the shape of a Manager of the Week prize pack.

At the end of every gameweek the player with the highest points total from the fixtures played in that period receives a bundle that includes a Nike Flight match ball, FPL rucksack and mug, and a copy of FIFA 22.

There is also a goody bag containing the items listed in the previous section and this is additionally gifted to the 19 other best-performing managers of that particular gameweek.

What are the prizes for Fantasy Premier League?

Prize bundles are awarded to weekly and monthly winners. For the former, a Nike Flight match ball, FPL rucksack and mug and a copy of FIFA 22 is delivered to your home along with a goody bag.

A Manager of the Month is rewarded with all of the above as well as a Nike jacket, Bluetooth speaker and a tablet computer.

What do you win if you win FPL?

An array of fantastic prizes awaits you should you be crowned the 2021/22 PFL champion.

These include a VIP hospitality trip to two Premier League matches, with seven nights’ accommodation along with a week’s worth of sight-seeing around the UK, again with hotel stays arranged.

There is also a Swiss designer watch and a games console up for grabs as well as a plethora of other assorted goodies.

How much do you win in fantasy football?

There are no monetary rewards for excelling at FPL. Instead, prizes are gifted to those who accrue the most points over a week, month, and season.

To qualify for these prizes a player must have been playing for at least two Gameweeks or joined prior to the season. Any chips used in a successful Gameweek disqualifies a player from becoming Manager of the Week.

Regrettably no, though the desirable range of prizes on offer compensates for this. Gaining bragging rights over your friends meanwhile remains priceless.