Our racing writer reveals his favourite moment in the history of the Prix de L'Arc de Triomphe - Torquator Tasso winning the race in 2021! 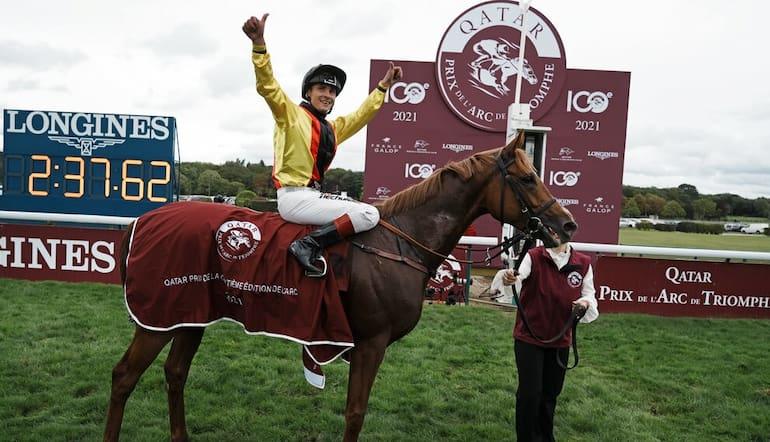 Although I have only been attending the Europe’s greatest middle-distance race in person for the last ten years – since I turned 40-years-old in fact, my infatuation with the Prix de l’Arc de Triomphe stems all the way back to my school days and those unique Sunday afternoon broadcasts on the BBC.

If you cast your mind back there was no such thing as Sunday horse racing here in the UK until 1992, so in the 70’s and 80’s, watching a slightly grainy looking racing outside broadcast coming live from another European country, was quite a novelty to say the least.

International It’s A Knockout (Jeux Sans Frontières) and the Eurovision Song Contest were about the closest you would ever get to continental television being beamed live into your living room in those days. “Here come the Belgians!” being a popular catchphrase for those of you that remember.

There were many facets that made the BBC’s Sunday afternoon Arc coverage fascinating and compelling viewing.

I recall it being a reasonably short programme, so you would get the big race and very little else, plus they spoke of and referred to a pretty alien betting system to most British people – the Pari-mutuel (PMU).

What was this French mathematical wizardry I thought? You put on so many francs at something point something to one, but that pays something completely different at S.P back in the UK? This was mind blowing stuff to a schoolboy tuning in to watch on a Sunday afternoon.

So fast forward my life into adulthood and the onset of middle-age, and I had read somewhere that the French racing authorities were planning to knock down the old Longchamp grandstands.

This prompted me straight into nostalgia overdrive and my own personal mission that I must visit the racecourse before it gets changed out of all recognition – my television recognition.

Arriving at Longchamp in 2013, I was completely smitten by the whole ambience of this historical Parisian racecourse.

The horse chestnut tree-lined boulevards behind the imposing white grandstands, the tranquil paddock and of course the very beautiful chic French women.

On the track I’ve witnessed the wonderful mare Trêve scoring twice but failing to win her third Arc, Golden Horn winning from a car park draw, Found and Enable taking top honours at Chantilly whilst Longchamp was being redeveloped, Enable taking the spoils at the newly opened ParisLongchamp but failing to make it number three in 2019 when Waldgeist was victorious, the 2020 “behind closed doors” renewal which was scooped by the homester Sottsass, but my greatest Arc memory to date has to be the German-trained horse Torquator Tasso taking home the spoils in 2021 – the 100th edition of the contest.

Not only did I put a copious amount of time and effort into studying the German form, but I was lucky enough to back him at some lovely odds in my horse race bets online.

Through some mutual friends I was extremely honoured to meet some of the horse’s connections before and after the big race, and the whole raw emotion of the occasion will long be an Arc memory I’ll never forget.

If you ever get the chance to visit ParisLongchamp for the first time, as you ascend the main entrance staircase you will be met by the statue of the legendary champion Gladiateur.

That mental image could well be instrumental in enticing you back to the venue year after year. It  certainly did with me.

Of course, if National Hunt racing is more your scene then check out all our 888Sport Cheltenham races betting odds here.