Scroll down for our list of the top 10 European Championship finals goal scorers... 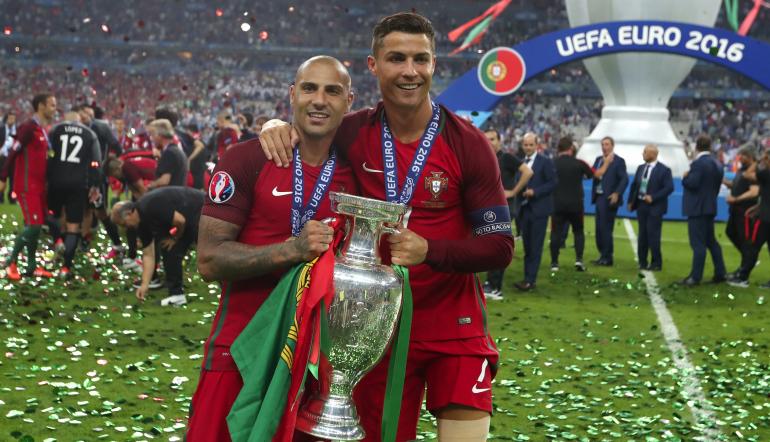 The European Championships have been given a facelift for the 2020 edition of the tournament.

Matches will be played all over the continent for the first time. Previous competitions have sometimes been shared, and the decision to alter a tournament with such a long history was obviously a controversial.

That history has featured some of the greatest players in the sport’s history, and seen some players make their name on the continental stage.

This article is taking a look at the highest goalscorers in European Championship history, featuring a fair few tournament winners…

No player has impacted a European Championship quite like Michel Platini did in France’s 1984 triumph.

His nine goals in five matches weren’t a case of beating up on weaker opponents either – several determined the outcome of matches, and his perfect hat-trick against Belgium is one of the great individual performances in tournament history.

Platini belongs alongside Pele, Johan Cruyff and Diego Maradona as one of the best footballers of the 1900s.

Longevity, rather than supremacy, has put Cristiano Ronaldo atop this list. Having featured in four Euros, it’s a surprise to see Ronaldo as low as nine goals.

Some of that can be put down to the style of the Portugal sides he’s played in, some of it down to Portugal disappointing on the biggest stage.

Ronaldo will surpass Platini next summer as Portugal look to defend their European crown, putting him at the top of yet another goal scoring list. 888sport has all the latest odds on Euro 2020 – do you fancy Ronaldo to lead Portugal to the trophy again?

Alan Shearer was no stranger to a Golden Boot, having won three in the Premier League. His five goals at Euro 96 added another to the collection, as England fell in a semi-final shootout against Germany.

The Premier League’s all-time top scorer cut his international career short, and resisted the public outcry from him to return for both the 2002 World Cup and 2004 European Championship.

Frenchman Antoine Griezmann has only played in one European Championship, but it was a special one on an individual level.

The Barcelona forward won the Golden Boot, Player of the Tournament and was named in UEFA Team of the Year a few months later.

Unfortunately for Griezmann, Euro 2016 ended in heartbreaking defeat to Portugal. World champions France are fancied to go back-to-back at Euro 2020 – Griezmann might be top of this list in a few months’ time.

Ruud van Nistelrooy was as lethal a finisher as there’s been in the 2000s. He averaged a goal every other game for the Netherlands and bettered that in Euros action, scoring six in eight appearances across the 2004 and 2008 tournaments.

Van Nistelrooy was named in the Team of the Tournament in 2004 after scoring four goals in the competition, including a brace against Latvia.

The former Manchester United man netted a key opener for the Netherlands as they beat Italy in 2008.

Patrick Kluivert was the Netherlands’ all-time leading scorer until he was passed by Robin van Persie in 2013.

A third place at Euro 2000 was the closest Kluivert got to international glory – he was selected in the Team of the Tournament that year and lifted the Golden Boot after scoring five of his six European Championship goals.

An elegant, obscenely talented footballer, Kluivert was a prominent member of that magnificent Ajax team in the 1990s.

The Netherlands have another generation of wonderful players coming through right now – see what 888sport make of their chances in the latest Euro 2020 qualifying tips.

Despite having a reputation as a player who disappointed at major tournaments, Wayne Rooney’s six goals in 10 European Championship matches is a pretty impressive record.

Of course, four of those came when he was a young sensation at Euro 2004 – he made the Team of the Tournament that year, but England suffered a gutting quarter-final defeat.

Different factors impacted Rooney’s success for the England team, whether his own fitness or squad turmoil. It’s hard not to look at those six goals in 10 matches and wonder what could have been.

Check out the latest football betting to find out England’s odds for Euro 2020.

A European champion in 2000 and twice the recipient of the European Golden Boot, Thierry Henry was one of the finest footballers of his generation (like many on this list). The former Arsenal and Barcelona forward appeared 123 times for France.

Henry possessed not only immense pace, magical dribbling skills and a left foot capable of wizardry, he was deceptively strong, making him an almost impossible player to challenge.

Ibrahimovic featured in four Euros but failed to score in the 2016 competition. The icon of Swedish football, Ibrahimovic made Sweden a fearsome team to face throughout his long career.

When he retired in 2016, he’d collected 116 caps for his country, scoring 62 goals in the process. Twice earning Goal of the Tournament honours, Ibrahimovic was no stranger to the spectacular at the Euros.

Portuguese striker Nuno Gomes appeared in three European Championships, scoring in the 2000, 2004 and 2008 versions of the tournament.

A runners-up finish in 2004 was the closest Gomes got to glory after finishing third in 2000. Most well known for his time with Benfica, Gomes also played for Blackburn Rovers while accumulating 79 Portugal caps.