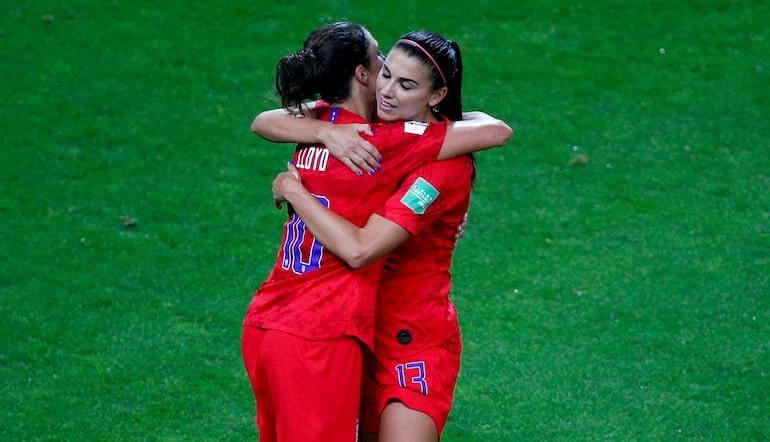 Women’s football is growing at an incredible rate of knots. Punters can now find women's football betting odds on many of the top female competitions - much to the delight of soccer fans around the world.

With the likes of England and Brazil now offering the same rate of pay for men’s and women’s international teams, there is a platform for female soccer to thrive.

Finances are part and parcel of the modern sport. The best male footballers are earning an extortionate amount of money per week – and the highest paid female soccer players are making a decent living too.

According to football media publication France Football, Ada Hegerberg was the highest earning female player in 2019 – with the United States star making $518,000.

To put that into some kind of perspective, that is just 0.3% of Lionel Messi’s earnings in the same year.

Salary figures in football are obscene, particularly when you make comparisons to the men's game. Even Premier League referee salaries can sometimes rival the average female soccer player wage...

Without further ado, it is time to look at the latest financial figures regarding the best paid female footballers. There are some familiar names on this list, with two female Ballon d’Or winners making the cut.

Sinclair sneaks into this list of the most paid female footballers in 2020. The 37-year-old is the captain of the Canadian national team while playing for Portland Thorns in the National Women’s Soccer League (NSWL) at club level.

She holds the record for the highest number of international goals scored for female AND male players with 186 goals. In addition, Sinclair has won the Canada Soccer Player of the Year award on 14 occasions during her illustrious career.

However, with an annual salary of $380,000, she is only the 10th highest paid female soccer player in the world. In terms of her impact and influence on the sport, Sinclair is one of the players of her generation.

Renard has been there and done it all – she has won French titles, she has won European Cups and she has been named in various All-Star teams. With an annual salary of $392,000, Renard ranks as the ninth highest paid female footballer this year.

One of the most successful players in women’s club football, Renard has committed her entire playing career to Lyon. Renowned for her goal-scoring ability as a defender, Renard is a unique talent across female soccer and men’s football.

While a World Cup continues to elude her grasp, Renard will still go down in history as one of the best players at her position. At 6 foot 1, she towers above her peers and is well worth her lucrative salary.

A rock in midfield for France, Henry comes next on our list of the highest paid female soccer players in 2020. According to figures, Henry’s annual salary is $394,500 which puts her just ahead of France teammate Wendie Renard.

Like most of France’s successful stars, the 2015 FIFA Women’s World Cup Silver Ball winner plays for Lyon at club level and she is one of the first names on the teamsheet. As captain of the French national team, she is irreplaceable.

To put her earnings into perspective, Paul Pogba is the eighth highest paid male footballer in 2020. Both play for France but Pogba’s annual salary is 58 times higher than that of Henry – a statistic that shows the discrepancy between male and female soccer pay.

Possibly the most famous female footballer of all-time, Marta is seventh when it comes to the top earning women soccer players in 2020. Playing for Orlando Pride in the NWSL, the Brazil legend is still showcasing her talent on the biggest stage.

Marta has been named FIFA World Player of the Year on six occasions, with five continuous awards from 2006 to 2010. In addition, she was a key member of the Brazil teams that won medals at the 2004 and 2008 Olympic Games.

Marta has been dubbed the female Pele by the great man himself and she is undoubtedly one of the all-time greats. However, her $400,000 annual salary leaves her short changed compared to some of her peers.

The highest paid female player in football in 2019, Hegerberg is one of the most popular icons in women’s soccer. Her presence on the field is enough to swing betting expert betting tips in a football match.

Like many others on this list, the Norway star plays for Lyon at club level and she is the sixth top paid player in women’s football.

Hegerberg’s salary is recorded at $425,000 for 2020 but she also earns a lofty sum of money through various sponsorship deals. That contract with Nike puts her as one of the sport’s highest profile athletes...

The first player ever to be awarded the Ballon d’Or Feminin, you could argue that Hegerberg is worthy of a place higher up on this female soccer earnings list. Keep an eye out for the Norway star on Nike adverts in the coming months.

According to financial figures, Ertz is the fifth highest earning female soccer player on the planet this year. The latest annual salary information states that Ertz is earning $430,000 per year – which puts her ahead of Ada Hegerberg.

Ertz stars for the Chicago Red Stars in the National Women’s Soccer League and also plays for the United States women’s national team. A two-time FIFA Women’s World Cup winner, Ertz is one of the most consistent female soccer players.

In fact, Ertz was named the U.S. Soccer Female Player of the Year in 2019 after helping her country triumph at the Women’s World Cup. She is one of the best female football players around and is a key figure at club and national level.

If you watched the 2019 FIFA Women’s World Cup, you will know all about United States star Megan Rapinoe. Climbing up to fourth on the list of the highest paid female players in 2020, Rapinoe was named the Best FIFA Women’s Player in 2019.

In addition, Rapinoe claimed the coveted Ballon d’Or Feminin award in the same year – two feats that contributed to her hefty $447,000 salary. She is a legend of the sport and is widely regarded as a pioneer for change at the highest level of women’s soccer.

Rapinoe is sponsored by Nike but she falls short in her bid to break into the top three highest paid female footballers. Expect to see plenty of Rapinoe in the media and on the soccer field for years to come.

Now playing for Tottenham Hotspur in the Women’s Super League, Morgan is arguably the biggest icon in women’s soccer. Known all around the world for her immense performances on the pitch, Morgan has worked her way to the very top of the football world.

With an annual base pay of around $450,000, Morgan’s yearly salary is not atmospheric by any means. In fact, the majority of her income comes from major endorsement deals with the likes of Coca Cola, Nike and McDonalds.

She has appeared on the front cover of two different editions of the FIFA soccer video game franchise and is a social media veteran. In fact, she is the most-followed female footballer on Instagram – Morgan is undoubtedly the most commercial player in soccer.

Kerr is a veteran of the game and she is now plying her trade for Chelsea on a mega-money contract. According to reports, her contract is worth $410,000 per year though there are a number of discrepancies over the exact figure – with some reports suggesting a $500,000 agreement.

However, she is certainly up there with the highest paid female soccer players in the world. The 26-year-old is captain of the Australia women’s national team and she is already the face of Nike Australia. The sky is the limit for Kerr.

The all-time leading goal scorer in the NSWL and the Australian W-League as of 2019, Kerr is second only to United States star Carli Lloyd. Could she climb up to top spot in the female soccer salary rankings next year? Only time will tell…

Lloyd is the highest earning female footballer in 2020 – and nobody could say she doesn’t deserve that title. One of the best players around, the Sky Blue FC star has been a pillar of consistency since making her debut in 1999.

Known predominantly for her incredible record for the United States national team, Lloyd has showcased her talent on the biggest stage of all. In 294 international games, she has scored an incredible 123 goals - making her a popular pick in football prediction tips today at major tournaments.

Given what she has achieved throughout her career, her $518,000 annual salary is hardly consistent with that of an all-time great but she at least tops the list of the highest earning women footballers.

Lloyd’s career is coming to an end but she has helped influence young girls across the United States to follow their dreams in women’s soccer.