888sport sit down with former Sheffield United star Michael Brown to discuss the Blades, as well as his other previous clubs... 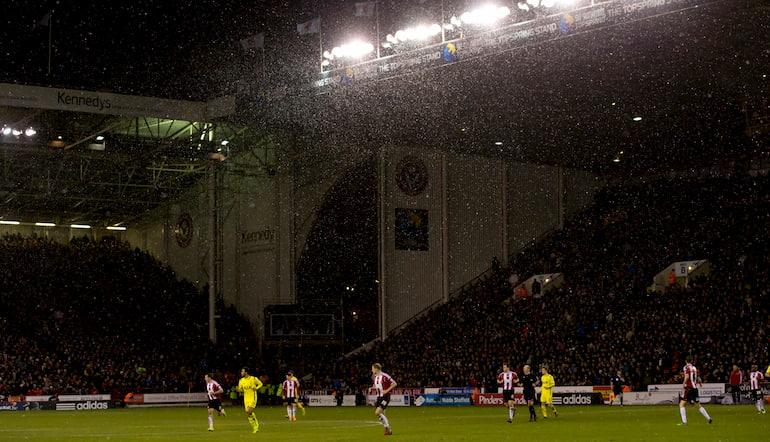 Not many footballers play until they’re forty and certainly not those who are industrious in midfield; entrusted to give their all every game. Then again, Michael Brown was a rare breed.

In a career that spanned well over two decades the Hartlepool-born star estimates that he played for over 30 managers and at every one of his nine clubs he was greatly admired by the supporters for his ceaseless endeavor. He won Player of the Year awards at Manchester City and Sheffield United. He won about a million tackles.

Now a respected pundit, here the former England Under 21 international looks back on some of the clubs where he made his mark, starting with one very much in the ascendency against all expectation.

Blades Can Get Even Sharper

Having established himself as a competitive midfielder of note at Manchester City, Brown moved across the Pennines whereupon he quickly became a firm fan favourite, loved for his tough tackling.

Even many years on from his four-year stint at Bramall Lane his affinity with the Blades remains; which is clear when marveling at their remarkable climb to the highest echelons of the Premier League.

With United fast becoming one of the success stories of this season the question on everyone’s lips is what are they doing so well that other teams cannot? For Brown it’s all about the collective.

“I spoke to Chris Wilder on the media day at the start of the season and I asked him how he was going to go about it and set his team up. And I think there is the key point – team.

"They have a great team spirit. His signings were players he felt were still hungry and with something to prove. They want to join the team ethic.

"It’s just such a great place. I was down there last week for the Bournemouth game and there is a buzz about the place with everyone enjoying it. Even the players who are on the bench are happy to contribute and are waiting to help.

"And how brave have the players been? They always look to keep the ball and you think they might lose possession but they don’t. They’ve been incredible.”

If wondering what lies behind United’s perceived over-achievement is the most obvious line of enquiry the inevitable follow-up is to ask whether it can be sustained. Brown is confident it can.

"They have spent some money improving all that and the ownership situation because there were some issues there. It can only get better and we have seen what a successful season in the Premier League has done for certain clubs.”

And what of the possibility of qualifying for the Champions League, the impossible dream? The unlikely notion of Oli McBurnie and co rustling feathers at the Bernabau next term is certainly one for the romantics among us.

“They’re two points off the top four and have a good run of games but they just need to keep doing it week in, week in. You’re probably thinking they’re going to lose this game or that game but they go on to win them.

"They have to just keep enjoying it and working hard; don’t get complacent and finish as high as they can. Anywhere in those European spots would be a remarkable achievement for Chris’ guys."

For all of Brown’s consistent excellence in Yorkshire – that led to him being selected in the PFA Team of the Year in 2003 – what also comes to mind is his heavy involvement in the infamous ‘Battle of Bramall Lane’.

With Neil Warnock and Gary Megson at war on the touchline their sides fought out an inflammatory contest that resulted in the Blades having three men sent off.

When Brown and Rob Ullathorne both subsequently limped off injured the match was abandoned. What does he recall of that stormy afternoon?

“It was just bizarre. I’m asked on many occasions what it was like and you don’t realise what type of game you’re involved in until the game finishes.

"It was just a very strange game that finished really poorly but it’s only when you look back on it that you realise just how crazy it was.”

City's Legacy Will Be Their Breath-taking Football

The Manchester City of the nineties was a very different beast to that of today.

Riddled with ‘City-itis’ it was a club that persistently grabbed farce from the jaws of victory and so it’s perhaps fitting that after coming through the ranks at Maine Road, Brown found himself sent off mere minutes after coming on as a substitute to make his professional debut.

“I just remember getting around the pitch a little bit then I pulled on Andrew Impey’s shirt and the ref came over.

"I thought it was going to be a yellow card but it was actually deemed a red because he said I was the last man. I wasn’t. Alan Kernaghan was coming around the back.

"So it was a really surreal feeling. You’ve gone from the biggest high to the biggest low, sitting in the dressing room thinking I was never going to play again. I thought my career was over.”

It was an early set-back that could have had a substantial effect on the callow teen. Instead it was character-building.

“It was a great learning curve for me to deal with the highs and lows and the adversities football can throw at you. As a young player going through you will get so many of those and that is probably why I played until I was forty.

"People kept knocking me but I kept on coming back because I knew there are many ways not to give in. That’s what I did right throughout my career.”

Fast-forwarding to the present-day City are the reigning Premier League champions with a coach widely credited with re-imagining the game for the better.

Yet the recent punishment of a two-year Champions League ban administered by UEFA for allegedly inflating sponsorship income threatens to tarnish their image significantly. Might it even result in all of their good work being disregarded by some?

“We will get rival fans with opinions and that is normal these days. But we just have to look at what we were treated to last season with City’s performances in the Premier League and to win every game in the run-in was remarkable.

"Some of the football we’ve seen under Pep Guardiola has been breath-taking the likes of which no-one else has ever produced.”

Leeds Can Attack Their Way Back To The Top

After battling for the causes of Manchester and Sheffield, Brown enjoyed spells at Tottenham, Fulham, Wigan and Portsmouth before Leeds United came calling with the player then firmly into his thirties.

Reunited with Warnock, his second stint in Yorkshire saw him re-energise the Leeds midfield in typical fashion and again typically gain the affections of a new fan-base. It is an endearment that is still reciprocated.

Does Brown believe the Whites are heading back to the big time under the idiosyncratic and box-office Marcelo Bielsa? And, perhaps more pertinently, is there a danger the Argentinian might walk away if promotion once again eludes them?

“Only he can answer that. They didn’t make it last year and he obviously decided to give it another year. They’re in a fantastic position and play a great style of football: very attacking.

"It’s a big club as we know and sometimes there comes with that a bit of pressure. That pressure can heat up and it’s been a bit tough for them with a couple of injuries and suspensions.

"Hopefully now though they can get back on the right track and get the results to return to the Premier League.”

And what of Kalvin Phillips, the player enforced with energizing Leeds’ midfield several years after Brown did likewise. How much has he impressed the 43-year-old?

“I think Kalvin Phillips is a brilliant player. I can’t say enough about him. He’s a great character and great lad and he’s got everything.

"His experience is gaining and he can play in different positions and Leeds missed him when he was out. It’s great that he’s back now for the run-in.”

Pompey Have Done Themselves Proud

It was arguably on the south coast where Brown experienced his greatest days, reaching a FA Cup final – after beating Tottenham in a semi that is still very fondly recalled by the Pompey faithful – and all to the backdrop of looming administration after the club over-spent to their peril.

Memories created that year sustained them through the prolonged freefall that followed.

Buoyant once again and seeking a return to prominence Portsmouth have recovered well from a disappointing opening few months of the season and now find themselves stoically in the promotion mix.

As Brown points out, that is not all they have to be optimistic about either.

“It’s an understatement regarding a recovery on what Kenny Jackett has done. It’s been an amazing turn-around because the pressure was mounting. It was a real slow start.

"But they’re really hit the ground running with fantastic home form. It was an exciting one to get to the final of the Leasing.com. I’m going to be covering the game against Arsenal on the Monday night in the FA Cup.

"So they’ve got a cup final, a FA Cup game against Arsenal at Fratton Park, and a promotion push. So it’s really good times.”

How does he think his former club will fare in their forthcoming cup clash with the Gunners?

“Fratton Park will be rocking. There is no better atmosphere. It’s a great place to play though yes it can be improved.

"But when all of those supporters are there it’s a great atmosphere and Arsenal are still in transition with Mikel Arteta still trying to find his formations and tactics. It will be tough for them.”

Finally, when asked about his most treasured reminiscence of his time down there his response reveals a good deal about the attributes of a player who always gave his all and always came back from adversity. A rare breed indeed.

“The game against Spurs was amazing and walking out for the cup final was also a bit special. They’re the occasions but for me it was great leading the Portsmouth team out when captain. I was very proud and honoured to do that.”