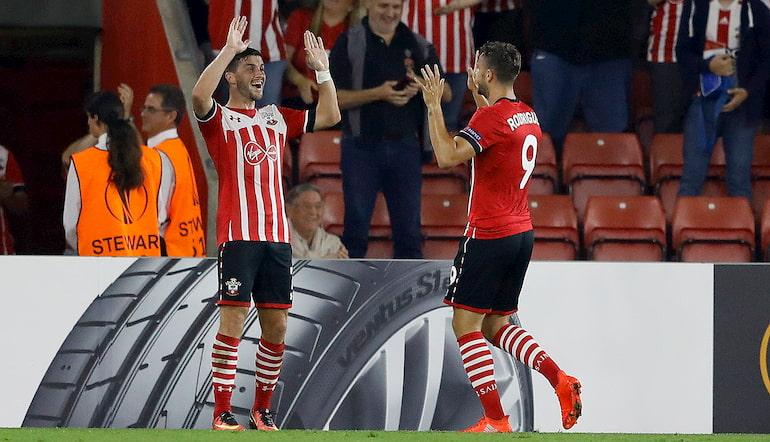 The list of the fastest goals in Premier League history is a mixed one.

We have a goalkeeper, we have the all-time record scorer, and we have a striker renowned for not scoring. The circumstances are varied, some aided by the weather, others by calamitous defending.

Several of these goals, coming in the first 10 seconds or so of a match, will have had a major impact on Premier League Odds.

There is something chaotic about a goal so early. It sends the Soccer Saturday team into panic, and to use a cliché loved by commentators, it throws gameplans out the window. Here are the 10 fastest Premier League goals in history…

Aided by the blustery Potteries wind, Asmir Begovic owns the record for the 10th earliest goal in top flight history and, by quite some margin, the fastest Premier League goal by a goalkeeper.

With the ball trickling back to Begovic soon after the kick-off, he decided to go for an agricultural hoof up the field.

Little did he know he would be celebrating a goal soon after as the wind swept the ball towards the goal, bouncing over Artur Boruc and into the net to become only the fifth goalkeeper to score a Premier League goal.

Chelsea didn’t concede many in 2004/05, but James Beattie took just 13.52 seconds to get the break through for Southampton.

A Joe Cole error gave Beattie a chance, and the journeyman striker unleashed a volley from range that flew past Petr Cech.

Chelsea were atop the outright winner odds, but Beattie’s strike made it a challenging afternoon for Jose Mourinho.

Kevin Nolan and Kevin Davies were the heart of a surprisingly competitive Bolton side in the mid-noughties.

It was Davies who set up Nolan in 2004 for an opener in 13.48 seconds against Blackburn Rovers. The two linked up often, but there weren’t many occasions when Davies was crossing the ball. This was one of them.

Alan Shearer and Chris Sutton are one of the Premier League’s great striker partnerships.

In April 1995, they linked up like they did so many times over the years. A long ball was flicked on by Shearer in April 1995, and Sutton chased it down.

Sutton calmly finished, and Rovers were leading Everton within 13 seconds. At the top of football betting all season long, Blackburn lifted their first, and only, Premier League title the following month.

Best known for his stint in the red of Manchester United, Dwight Yorke earns his place on this list in the colours of Aston Villa.

Facing Coventry City in 1995, Yorke headed home a cross just over 12 seconds into the match.

Back in the days when Leeds were a top four betting favourite, Mark Viduka’s got an extremely early goal similar to several others on this list.

Alan Smith got a touch on it to put Viduka through in March 2001, and moments later Leeds were 1-0 up against Charlton.

The former Celtic striker finished the 2000/01 season with 17 Premier League goals, a tally only bettered by Jimmy-Floyd Hasselbaink and Marcus Stewart. Leeds had to settle for fourth, one point outside the Champions League places.

Christian Eriksen netted the fastest goal at Wembley in 2018, an accolade that might never be beaten.

Spurs, playing at home to Manchester United, had time for a Harry Kane knock-down, and a touch from Dele Alli, before Eriksen found the net before the 11-second mark.

There was no quick team move for Shearer’s entry on this list. Manchester City goalkeeper Carlo Nash lost his footing as a backpass approached, allowing Shearer the easiest of rapid goals.

Newcastle finished third in 2002/03, but it wasn’t Shearer’s most prolific season – he finished with 17 league goals, only good for sixth in the scoring charts.

Ledley King held the fastest goal record for the best part of two decades. King scored in under 10 seconds against Bradford in December 2000.

His ambitious effort from range took a wicked deflection, bouncing into the far corner. King’s shock opener kick-started an epic, with Bradford fighting back to force a 3-3 draw.

The 'fastest Premier League goal' feels like a very Shane Long record to hold. Long is a striker with a reputation for goal droughts, a player who works tirelessly for little reward, but has the pace to harass defences.

He’s never an online betting favourite to open the scoring, but he did just that against Watford in April 2019.

Watford took kick-off and played it back to Craig Cathcart. Typically, Long hustled to close down the Hornets’ centre-back and blocked his attempted long pass.

It ricocheted behind the defence, Long chased it down, and dinked over Ben Foster to secure his place in the Premier League record books.