Eddie Howe was once touted as the next Arsenal manager but his managerial skills have been questioned in recent times - is he the most overrated manager in the Premier League? 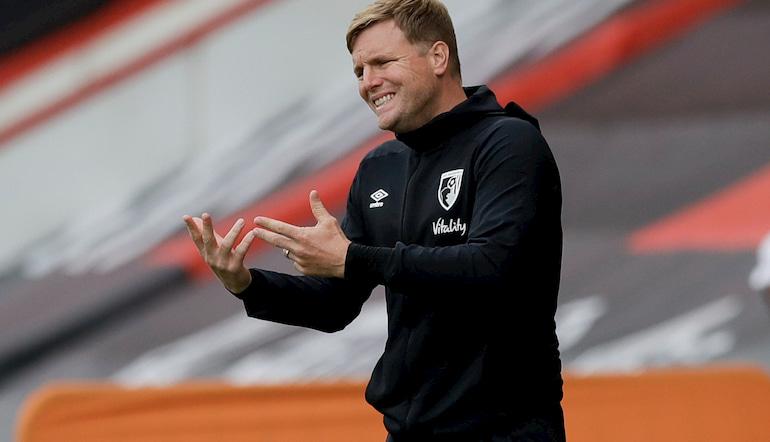 A young, British manager getting results in the Premier League is met with praise. Add in the attack-leaning nature of Eddie Howe, and that applause increases further.

Howe’s Bournemouth were playing the game the ‘right way’, and doing so effectively, barely threatened by relegation and comfortably sitting in mid-table.

The Premier League odds rarely fancied Bournemouth to go down. Howe had developed a team, featuring some long-standing players, which attacked with freedom.

They scored goals (their 56 last season was the most outside the top six), and conceded plenty (they let 70 in last year, only Huddersfield and Fulham conceded more).

Howe had made Bournemouth a Premier League staple, much like what Tony Pulis achieved with Stoke City, but he had done it without compromising his team’s value as entertainers.

It was about possession, speed, and committing men forward. They suffered the odd thrashing, but they handed out a few, too. They would be overmatched by the league’s best, then they would occasionally catch them out.

While occasionally wrestled into relegation discussion in years past, the 2019/20 has been the most challenging of Bournemouth’s Premier League adventure. For the first time, they seem like they could be a part of Championship betting next season.

Bournemouth’s defence this season has been similarly flimsy. They are in the bottom five in expected goals against, but that isn’t a particularly unusual position for Howe’s team to be in.

It’s the other end of the field, the trademark of Howe’s Bournemouth, where they are now struggling. Last season, they were seventh in expected goals. This year, they languish alongside some of the league’s least effective attacking teams.

There are reasons for such struggles – injuries have played a major part – but the outcome may well be relegation.

For all that Bournemouth have achieved, for all the status Howe has built, relegation, and the manner of how it is threatening to happen, would be damaging.

Where It Went Wrong

It could all change in the closing weeks of the season. Bournemouth could hit a hot streak and pull off a 'Great Escape'. At this point, that looks unlikely.

Bournemouth look like a team fading, waving goodbye to their Premier League journey as core players age and, perhaps most importantly, costly investments fail to deliver. Managers often take the brunt of responsibility for poor signings.

That isn’t always fair given the structure at clubs, and Howe isn’t the only one responsible for some dodgy Bournemouth spending, but unsuccessful signings have been a roadblock for Bournemouth in recent years.

The decision to splash cash on Dominic Solanke and Jordon Ibe surely count against Howe’s record. Bournemouth are far from the richest club in England, but their underdog tale has been overplayed in some quarters.

They have spent during Howe’s reign – the spending has often been unsuccessful.

Jefferson Lerma was a major outlay. Asmir Begovic cost around £10 million and was barely comparable to the goalkeeper who starred at Stoke. Solanke and Ibe have provided little on the south coast.

David Brooks and Nathan Ake have been solid investments. Both players could be sold for a helpful profit if Bournemouth are relegated in a few weeks’ time.

The less wealthy clubs in the Premier League cannot afford to swing and miss in the transfer market as often as Bournemouth have, and that has ultimately been their greatest issue.

How much responsibility Howe takes for Bournemouth’s hit-and-miss transfers is hard to judge. He hasn’t significantly changed the way his team play, but that is a criticism that can be thrown at many managers when things start to go wrong.

It was always going to be attack-minded from Howe. If this is the end of his time at Bournemouth, the only fair evaluation is to view it as a brilliant success.

It was a special time for the club, with some incredible results along the way, but most managers hit a point in a job when it - for whatever reason - is time for change. Maybe that’s the juncture Bournemouth and Howe have reached.

Howe’s stock has faded. Not so long ago, he was considered a future top-six manager, a legitimate candidate to succeed Arsene Wenger, and then Unai Emery.

He was owner of the best English manager title, a manager the England team would have been lucky to have.

Right now, his future at Bournemouth is in the balance. Still likely a target for Premier League clubs, but with a reputation notably weaker than before.

The style that earned such plaudits likely works against Howe on the job market. He’s not a firefighter manager of the ilk of Pulis, Sam Allardyce or even David Moyes.

Employing Howe is a club committing to a way of playing, to building something longer term rather than avoiding relegation at all costs.

Perhaps he was overrated, perhaps relegation will see the general opinion of him switch too far the other way.

Whatever the future holds, his achievements at Bournemouth should not be downplayed. There’s a good manager in there despite a difficult 2019/20.