Who will win the 2020 Ladbrokes Trophy at Newbury? Our horse racing expert picks his way through the field... 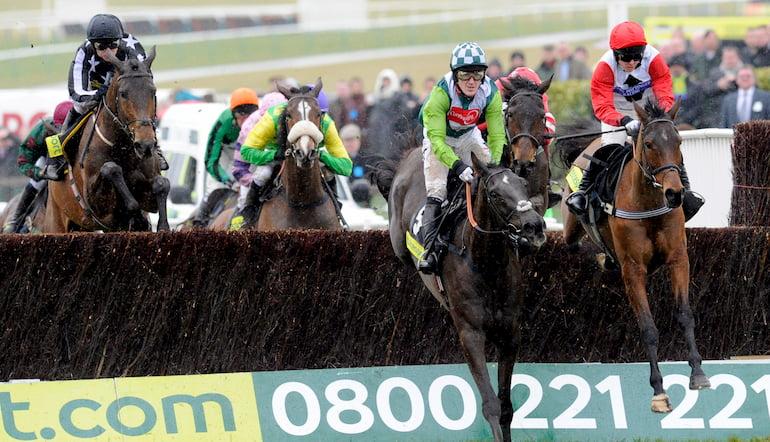 This iconic race is the highlight of the second day of the Ladbrokes Winter Carnival which starts on Friday.

In its previous incarnation as the Hennessy Gold Cup, racing legends such as Arkle, Mill House, Burrough Hill Lad and more recently Denman all wrote their legacies at Newbury in November.

In 2019, trainer Emma Lavelle landed the spoils with De Rasher Counter (12/1) and he was all set to defend his crown this year until he picked up tendon injury which has ruled him out for the rest of the season.

The longest-priced winner of the Ladbrokes Trophy was Sibton Abbey, a 40/1 outsider in 1992, while the shortest-priced was Arkle who justified odds of 1/6 in 1965.

Here is your 2020 Ladbrokes Trophy runner-by-runner guide to the field, with our comments comments in italics:

The Nigel Twiston-Davies-trained Ballyoptic is set to carry top weight of 11st 12lb which will be one hell of a tough task to win off for the former Charlie Hall winner.

Unless the heavens open you are better off looking elsewhere.

Kim Bailey’s seven-year-old was last seen running a respectable second to the high-class Cyrname in the Charlie Hall Chase last month and is well fancied to go well in this.

Last season’s Sodexo Cup victor and Ultima fourth is turning into a top notch chaser race by race. He has the ideal age profile for this race and should be there or thereabouts.

Chased home the hot favourite Native River in the Denman Chase at Newbury in February then returned with a victory at Chepstow on his seasonal bow.

Probably needs the ground to be a little firmer to be in the shake-up today.

Nicky Henderson’s ten-year-old clearly thrives at this venue and in this race, finishing fourth here in the last two renewals.

His long term target this season is the Grand National. At 12/1 in the online betting, he could well be an each-way steal.

Kildisart was a narrow second in the Ultima and he got this season off to a flyer by taking the Grade 2 bet365 Hurdle at Wetherby last month.

Owned by Simon Munir and Isaac Souede, the pair will be hoping for a big race double after Bristol De Mai triumphed last week.

Sam Brown was last seen running a cracking race behind Imperial Aura over an inadequate trip at Carlisle and must come right into the reckoning off that form line alone.

Oh you'd better stop and think what you’re doing before you leave this eight-year-old off your shortlist.

A course and distance winner at the track last season, Copperhead has every chance of bouncing right back over his favoured fences after putting in a poor show over hurdles at Wetherby.

Previous Newbury winners hold a fine record in this race.

Third in 2017, Regal Encore runs in the familiar green and gold colours of JP McManus. The in-form veteran very much has the Grand National on his radar this season.

Aye Right is 7lb better off for a five-length beating in the Charlie Hall and is sure to be up in the van from the flag fall.

If his stamina holds out he may just cling on for the victory.

Finished fifth in this race 12 months ago and he races off the same mark on Saturday. Ran a reasonable race on his seasonal return at Ascot and should come on for that run.

Black Op finished the runner-up behind subsequent RSA Chase winner Champ at this very fixture last year and he stands out in a handicap like this.

Tom George could do with a turn of luck this week.

Smart novice chaser last season, winning at Carlisle, Kelso and Warwick and he opened up his account this season with a second place at Wetherby.

Bags of potential and from a yard that is firing in winners galore.

After finishing second in this race last year, The Conditional went on to become a progressive chaser, winning twice at Cheltenham including the Ultima at The Festival in March.

He will take all the beating if he’s fit and ready first time up.

A onetime high class mare but she appears to be on the wain somewhat in recent times as her last run at Wetherby showed.

25/1 is on offer in the horse racing betting if you believe she can find her old sparkle.

The Paul Nicholls charge was well supported for the Listed Badger Beers Chase at Wincanton earlier this month but finished a disappointing seventh of thirteen.

Not one of Nicholls’ most obvious winners this weekend.

The Ginge Army have had plenty of fun with Nigel over the years and this seven-year-old actually had The Conditional in behind him last season.

If there is one thing Potterman does its stay and the seven-year-old was just touched off in the Badger Beers Chase three weeks ago.

Looks sure to place at the very least at a double-figure price.

Seems to perform to a decent level in small fields but then his form falls apart in larger ones.

Needs to improve markedly to feature.

The lightly weighted Cloth Cap put in an impressive round of jumping to finish third behind Frodon at Cheltenham a month ago and can come on again for that experience.

These famous colours can give Trevor Hemmings the lockdown tonic he deserves.

Potterman has been so consistent this season that he is crying out to be backed at 16/1.

He looks absolutely thrown in off 10st 6lbs, his jockey is a real trier, and as a seven-year-old he fits the profile of the regular winners of this Newbury feature.