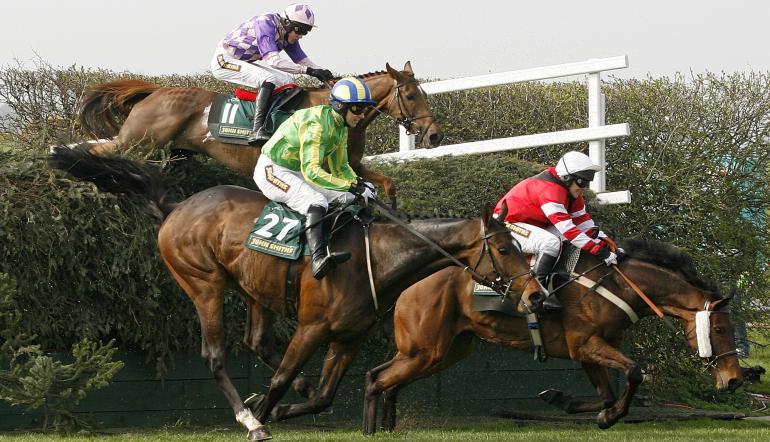 The road to Aintree really starts in earnest on Saturday as 18 runners head to Merseyside to jump the formidable Aintree fences in the Becher Chase.

There are 21 fences to be negotiated in all over a distance of three miles and two furlongs. Here is your runner-by-runner guide - who are you fancying for your ante post tips and bets?

On his return to handicap company, the Gigginstown-owned nine-year-old will have to carry top weight here but will have the assistance of the champion jockey Richard Johnson.

Alpha Des Obeaux crashed out of the Grand National at the halfway stage last April but in general he tends to run well in big-field handicaps and should put in a decent display over this shorter distance.

Winner of the Charlie Hall Chase but was never in contention in the Betfair Chase at Haydock.

Ballyoptic faces a much easier task here but worryingly he fell in both the Becher Chase and the Grand National last season.

Was bogged down somewhat in the Charlie Hall but appears to thrive at Aintree having won the last two renewals of the Many Clouds Chase on the same card.

This will be the ten-year-old’s second start over the National fences, having been badly hampered and pulled up in the 2017 Grand National.

According to the latest horse racing news reports, Ben Pauling has had the Grand National on the agenda for this horse since he won at the Cheltenham Festival in the spring.

A bold show will be required here if he is going to have any chance of Aintree glory.

One For Arthur (Lucinda Russell)

One For Arthur was fifth in the Becher before his National triumph in 2017 but his trainer has indicated that she feels this trip will be a little on the short side for him.

The grey fell at the first fence in this year's Grand National but is certainly a much better horse than that having been placed in both the Welsh and Scottish National’s and at the Cheltenham Festival.

His owner is always good for a winner or two at Aintree.

The ten-year-old is a standing dish at Aintree having completed on all his seven appearances over the famous obstacles and managing to sneak home by a short-head in the 2016 renewal of the Becher Chase.

He should complete the course again but in which position is the million dollar question?

The improving seven-year-old Mulcahys Hill will be tackling the National fences for the first time but comes here with a decent reputation after beating Wholestone by a neck in a Cheltenham novices' chase on his seasonal return.

It’s certainly worth keeping an eye on him as he could be anything.

As De Mee has won over the Grand National fences  before when he was triumphant in the Grand Sefton Chase on this card three years ago.

A tendon injury kept him sidelined for the whole of last season, but he came back with a little warm-up over hurdles and this will be his first big test since his return.

Abolitionist was the ante-post favourite for last year’s Becher Chase but he never made it to Aintree last December and did not make the line-up for the National either.

The fragile eleven-year-old is clearly talented on his day and could quite easily be the forgotten horse in this.

Walk In The Mill (Robert Walford)

Walk In The Mill is attempting to defend his Becher Chase title en route to another tilt at next April’s Grand National.

The brave nine-year-old showed his aptitude for the bigger obstacles by coming home a commendable fourth behind Tiger Roll last April and should be in the mix again here.

The nine-year-old has won nine times under rules with his biggest win coming in the Staffordshire Plate at Uttoxeter back in May.

Whether he is up to this class remains to be seen.

The Kim Bailey-trained eight-year-old made a winning start to this season by taking the Desert Orchid Silver Cup at Wincanton.

The gelding won at Bangor around this time last year in soft conditions and put in a solid round of jumping that day. If he takes to these unique fences he must be in with an outside shout.

Missed the Southern National at Fontwell due to the very poor ground conditions, then had a little prep race in a hurdle at Market Rasen for this.

All his four career wins have come in small fields so this is a very different kettle of fish.

Finished third to Wakanda in the Peter Marsh Chase back in January and it has always been the dream of his owner to have a Grand National runner.

Some of the proof will be in the pudding on Saturday afternoon if he can show his connections that he can deal with a stamina test.

The eleven-year-old posted a career-best at Kelso on his opening run of this season and had the likes of One For Arthur and Vintage Clouds toiling in behind him.

He is clearly in fine fettle and should not be underestimated in this contest.

Whether this seven-year-old is another Don’t Push It remains to be seen but his trainer Tom Lacey believes he is a stayer chaser in the making.

He was victorious in a decent long distance chase at Ayr last November but failed to cut the mustard in the Eider Chase and the Irish Grand National in subsequent runs.

The jury is out for me with this J.P McManus runner.

Winner of the Midlands National in March 2018 but has really gone off the boil in terms of form since.

His last run at Warwick however was pretty encouraging and he showed plenty of his old sparkle that afternoon.

He’s no forlorn hope at all at the foot of the handicap and he could be seen arriving late on the scene.

Races like the Becher Chase should come with a severe wealth warning as it’s very easy to make a case for every single runner in this feature and it is also rammed with plenty of old favourites that inevitably end up carrying your sentimental horse racing betting wagers.

Heartstring bets aside, I shall be taking an each-way punt on Kim Bailey’s Wandrin Star (nap). I was more than impressed when I witnessed him jumping in the flesh at Bangor several runs ago and he went into my notebook that day as a future winner of a big staying race.

Alpha Des Obeaux (nb) is a classy individual and I feel that he is more than able to carry around the burden of top weight here and acquit himself well with it.