Horse Racing: A Beginner's Guide To Racing In The United States

Our 'need to know' guide to horse racing in the United States - with a focus on tracks, jockeys, owners and more! 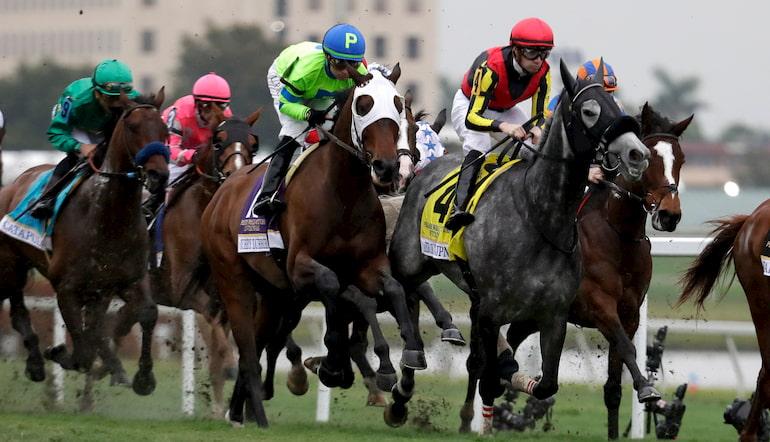 From daily racing at random tracks such as Churchill Downs, Tampa Bay and Turf Paradise taking global punters through an entire race meeting, to some of the biggest events on their sporting calendar, there’s a bit of something for everyone in US horse racing.

The sport as we know began to take shape in the late 19th century.

Tracks featuring Thoroughbred racing began springing up at that point all over the country, and the American Jockey Club was formed in 1894 to oversee it all.

However in those early years, those who were concerned about the pitfalls of gambling did all they could to put an end to horse racing across the United States.

The introduction of a pari-mutuel style wagering system (tote) in 1908 put an end to all those determined to stamp out the sport.

The system eradicated the need for unscrupulous bookies to be involved in any capacity at the tracks, and the risk of any races being rigged disappeared overnight.

As all this legislation and momentum was coming to fruition, major races began to grip the American public’s imagination, especially the so-called “Triple Crown” series, which was a sure fire winning formula.

Just as golf has the Masters and tennis has the Grand Slam, US horse racing has the Triple Crown as its showpiece event. The Triple Crown is unsurprisingly made up of three races: the Kentucky Derby, the Preakness Stakes, and the Belmont Stakes.

All three races feature three-year-old horses competing for large prize money, but the Holy Grail for the trainers, owners and jockeys alike is to be involved with a horse that can complete the clean sweep and claim the lot, something that has only happened 13 times since 1919.

Many of those Triple Crown winners have become some of the most famous racehorses in the world, including legends like Citation and Secretariat and the most recently American Pharoah and Justify.

The betting interest in these races is always immense even on the years when there is no Triple Crown winner. In 2019 $500 million was wagered on this racing triumvirate, with the Kentucky Derby leading the way on that score.

The Breeders’ Cup takes place every year in November and effectively rounds off the American horse racing season. The event always makes the horse racing betting news in a global capacity.

A series of championship races take place over the course of two days, with the honour of hosting the event spread out across the various premier racetracks in the United States each year.

The only exception to this was in 1996 when the event took place at Woodbine Racetrack in Canada.

The Challenge Series schedule is released early each season and the trainers begin to plot their best horses for the season, with a view to making it to this top fixture of the year.

As in all Thoroughbred racing jurisdictions around the world, the US season tends to follow a regular pattern of races across the yearly calendar. Here is what you can expect to see each month of the year stateside on the sports betting front:

The Sham Stakes is used as a prep race for the Kentucky Derby, allowing the trainers of any decent three-year-olds to see just where they are with them.

February’s feature is the El Camino Real Derby at Golden Gate Fields. This is the main prep race in northern California for big race contenders, such as those who might be entered for the Kentucky Derby.

The Rebel Stakes gives us important clues to the upcoming Triple Crown Series whilst the Louisiana Derby offers the participants a purse of $1m.

After a few months of preps, May finally delivers the goods. The first leg of the Triple Crown, the Kentucky Derby, is quickly followed a fortnight later by the second leg, the Preakness Stakes.

June in the US sees the third and final leg of the US Triple Crown, the Belmont Stakes and the first stage of the Triple Tiara, the Acorn stakes.

Horse racing aficionados around the world love the Breeders’ Cup and it’s quite easy to understand why. 14 elite races take place across two action-packed days, with the best Thoroughbreds around taking each other on.

There are five races for 2-year-olds on the Friday with nine big races all taking place the day after.

The Malibu Stakes race is always really interesting as several of the horses that took part in the Breeder’s Cup the previous month usually enter it.

The prize-pot may not be massive but the prestige of winning it is way more important to the connections.