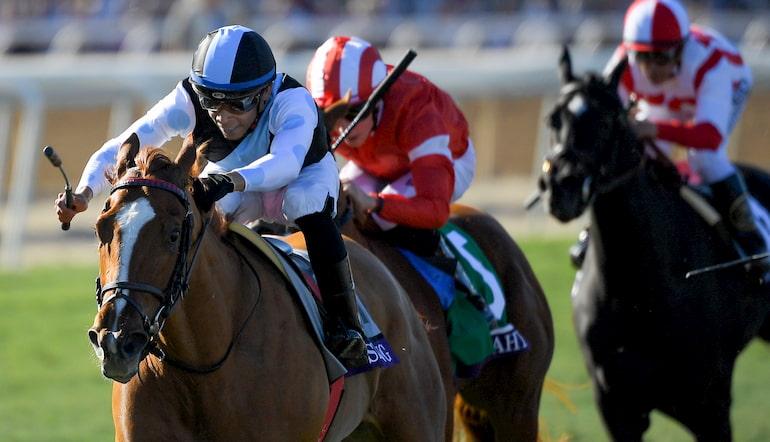 All eyes will be on Envoi Allen for Wednesday’s opener but I’d rather take a chance on SPORTING JOHN (3/1) at the prices. He has yet to do it in Graded company but he was very impressive at Exeter and is open to significant improvement.

Philip Hobbs will be quietly confident of a double on the day with Defi du Seuil in the Champion Chase and Sporting John could get the yard off to a great start.

DECOR IRLANDAIS (80/1) is massively overpriced and could feature prominently with a bit of luck. Second behind Mossy Fen at Warwick last time out, he is worth backing to finish in the places.

The RSA Chase is a tough one to call. Champ has bags of potential but his jumping is sketchy and it might be worth chancing COPPERHEAD (9/2) instead. A progressive type, he was superb in the Reynoldstown Chase at Ascot and should be in the mix.

He is the joint-best horse in the race on official ratings and trainer Colin Tizzard must rate him as one of his best chances of the Cheltenham Festival.

PYM (33/1) didn’t run his race at Ascot, with the ground really hindering his chances. Nicky Henderson will be hoping that the course dries up a little and he has a live each way chance.

DAME DE COMPAGNIE (10/1) looks well handicapped and this JP McManus-owned mare will surely go close in the Coral Cup. The form of her December success at Cheltenham has worked out well, with Indefatigable going on to win a Listed race at Warwick.

Nicky Henderson’s appeal against a collateral rise of two pounds was successful and she gets in off an attractive mark of 140 - which will only make connections even more bullish over her chances.

At a bigger price, EGLANTINE DU SEUIL (16/1) could run well. She has course form having won the Mares Novices’ Hurdle a year ago and connections will be hopeful of a big run. If anyone can get her back to her best, it is Willie Mullins.

You can make a case for any of the top three in the horse racing betting but CHACUN POUR SOI (5/2) caught my eye at last year’s Punchestown Festival. He finished four lengths clear of Defi du Seuil on that occasion and can confirm that form.

The Willie Mullins runner is lightly raced and there could be further improvement to come. His jumping could give him the edge over his rivals on Wednesday afternoon - he is my NAP of the day.

Finding an each way play in this race is tough but POLITOLOGUE (20/1) could be in with an outside chance of nicking a place. Paul Nicholls will have him primed and he can outrun his odds.

Can TIGER ROLL (21/20) do it? He ran well on his seasonal reappearance at Navan last month and Gordon Elliott’s stable star is surely the one to beat. He bolted up in this race by 22 lengths last year and you wouldn’t back against him romping home again.

The Grand National is Tiger Roll’s main target this year but connections will be hoping that he can claim his fifth Cheltenham Festival success en route to Aintree.

EASYSLAND (3/1) is undoubtedly the main threat to Tiger Roll this year. JP McManus moved to purchase the horse in January – which could turn out to be a tip in itself.

Aramax could turn out to be clear of the handicapper but I’d rather take a punt on MICK PASTOR (7/1) in this race. He was disappointing behind Allmankind at Cheltenham earlier in the campaign before cruising to victory at Ludlow in January.

He didn’t beat much on that day but boasts plenty of ability and he looks set to run a big race off a mark of 140.

Meanwhile, THEATRE OF WAR (20/1) is an interesting selection from an each way angle. He relished soft conditions in a big field at Leopardstown last time out and the general hustle and bustle of this race should suit.

APPRECIATE IT (6/4) has been touted as Ireland's Cheltenham Festival banker and punters will be piling into the Willie Mullins runner. He romped to victory in a hot bumper at the Dublin Racing Festival, destroying some very good horses in the process.

Patrick Mullins will get the ride and he has been raving about Appreciate It for a while now. If he emulates that Leopardstown run, he may prove too strong.

Don’t write ISRAEL CHAMP (10/1) off just yet. He has two Listed wins to his name, the second of which he was giving four pounds to the field. He is a solid each way bet.