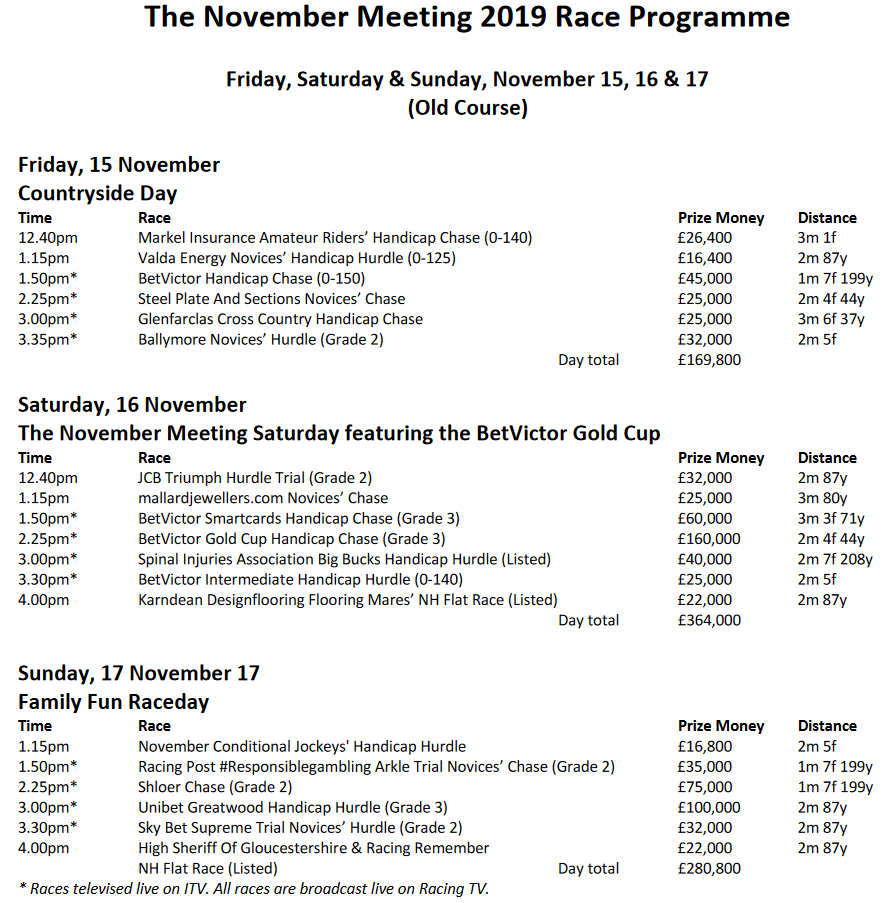 Click here to find the latest racing results on each day of The November Meeting.

The Jump season cranks up a notch later this week with The November Meeting, which gets underway with Countryside Day.

The six-race card includes the first race of the season around the Cross Country Course, with an interesting field entered for the £25,000 Glenfarclas Cross Country Handicap Chase over three and three-quarter miles.

Three of the entries have already won over the unique course including the French-trained Urgent De Gregaine (Emmanuel Clayeux).

The 11-year-old won the Glenfarclas Cross Country Handicap in January, 2017 and has also placed behind Tiger Roll in the last two renewals of the Glenfarclas Chase at the Cheltenham Festival itself.

Kingswell Theatre (Michael Scudamore) won the Glenfarclas Cross Country Handicap Chase at The November Meeting in 2017, while Fact Of The Matter (Jamie Snowden) triumphed at The International last year.

Fact Of The Matter was last seen finishing fifth in the Grand Steeple-Chase des Flandres at Waregem, Belgium, in April and the nine-year-old had a spin over Cheltenham's Cross Country fences earlier this week.

Gordon Elliott has entered Vyta Du Roc, twice a runner-up at Grade One level over hurdles, and Out Sam.

Other Irish-trained contenders include Yanworth, winner of the Christmas Hurdle in 2016, and Blue Templar, who are both trained by Enda Bolger, and Ballyboker Bridge (Peter Maher), winner of the famous La Touche Cup in May.

The most valuable race on the card on Friday is the two-mile £45,000 BetVictor Handicap Chase (1.50pm), which has attracted 16 entries including the last two winners, Doitforthevillage (Paul Henderson) and Bun Doran (Tom George).

They are joined by Croco Bay (Ben Case), who was triumphant in the Johnny Henderson Grand Annual Handicap Chase in March.

The Fergal O'Brien stable are in red hot form and they will be hopeful that Jarvey's Plate, who made an impressive debut over fences when taking a Listed novices' chase at Chepstow can score again in the Steel Plate And Sections Novices' Chase (2.25pm).

The six-year-old’s rivals could include Birchdale (Nicky Henderson), winner of the Ballymore Novices' Hurdle on Festival Trials Day, and the exciting Brewin’upastorm (Olly Murphy), who got his season off to a flyer at Carlisle on the 24th October.

The Ballymore Novices' Hurdle (3.35pm, 2m 5f) often showcases some of the stars of the future. In the line up is the Weatherbys Champion Bumper third Thyme Hill (Philip Hobbs), who recently took the Persian War Novices' Hurdle at Chepstow in October.

The racing highlight of The November Meeting, the BetVictor Gold Cup, always draws a large and high-class field for and was won last year by Baron Alco, trained and ridden by the father/son combination of Gary and Jamie Moore.

Slate House (Colin Tizzard) was a wide margin winner of a novice event on his return at the Showcase meeting. That was a much improved performance after a disappointing novice chasing season in which he never got going.

Saint Calvados (Harry Whittington) will relish any cut in the ground and the six-year-old showed his battling spirit to win the Randox Handicap Chase here in October. This will be a new trip for him but he looks well equipped to take on the challenge.

Nigel Twiston-Davies has a good record in this race and he saddles Count Meribel in this. The seven-year-old struggled against the top graded chasers last year but he did not disgrace himself when he finished second to Lostintranslation in the Colin Parker Chase at Carlisle.

Irish-raider Us And Them (Joseph O’Brien) was second in the Arkle and the Maghull Novices’ Chase last season, and made a decent seasonal when coming third in the PWC Champions Chase last time.

It would be quite some training achievement for O’Brien to win a big flat race in the USA (Iridessa, Breeders’ Cup) and then to take a big staying chase within the space of two weeks.

Siruh Du Lac (Nick Williams) completed an impressive four timer last season in the Festival Plate, when he got the better of Janika (Nicky Henderson) in a pulsating finish, with Spiritofthegames (Dan Skelton), just two and a half lengths behind.

The form of that race has already been franked by Janika’s win in the Haldon Gold Cup, which suggests that the trio can all make their mark on this race.

In recent years Nigel Twiston-Davies, Paul Nicholls, Jonjo O’Neill and the Pipe stable have monopolised this race. Since 1996 those four yards have won the BetVictor Gold Cup a staggering 16 times between them so it is worth taking note of any of their runners.

This is the only Sunday where racing takes place at Cheltenham Racecourse throughout the year and the afternoon is lit up by the ultra-competitive Greatwood Hurdle followed by the Sky Bet Supreme Trial Novices’ Hurdle.

The Greatwood Hurdle weights are headed by Le Patriote (Dr Richard Newland), who has not raced since landing the Pertemps Network Swinton Handicap Hurdle at Haydock Park in May.

The Tom Lacey-trained Sebastopol has been well supported in the horse racing odds since recording a seven-length success in a handicap hurdle at Wincanton on October 17th.

Anything Fergal O’Brien sends out to race at present has to be respected and his Benny's Bridge is surely going to be on many people’s betting slips.

Pacify, who is co-owned by the Duchess of Cornwall, is due to run in the Supreme Trial Novices’ Hurdle immediately after the Greatwood.

The seven-year-old will be bidding to extend his perfect record over the flights to six in total.