French racing is BACK! Our horse racing expert previews Monday's card at Longchamp... 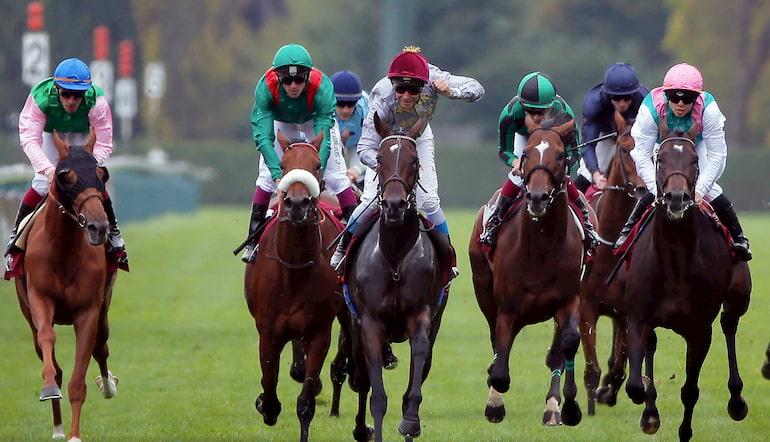 By Steve Mullington
May 8 2020
Horse Racing

There’s a veritable feast of horse racing taking place at ParisLongchamp on Monday afternoon, with no less than four Group-level races to be contested on an action-packed ten-race card.

The Jean-Claude Rouget-trained four-year-old is due to kick start his season off in the Prix d'Harcourt and is currently priced up as an 8/15 chance with us here at 888sport to make a winning return.

The one mile Prix de la Grotte is sure to provide plenty of Classic clues for the rest of the year with the top two in the French 1,000 Guineas (Poule d’Essai des Pouliches) betting, Khayzaraan and Tropbeau, due to take each other on.

Both horses are currently trading at 3/1 for the French Guineas in our ante-post market.

Sprinting is the name of the game in the opening race on the card- the Prix de Saint-Georges (5f Group 3).

Last year’s winner Sestilio Jet lines up once again, but due to travel restrictions the British and Irish raiders that have fared really well in this race over the years, will sadly be absent.

Prix de Fontainebleau hopefuls are headed by the Andre Fabre-trained Victor Ludorum who was last seen bringing home the silverware in the Prix Jean-Luc Lagardere on Arc day.

He will be a tough nut to crack if he turns up in the same frame of mind as last year.

Sestilio Jet won this race last year in heavy conditions in the hands of Frankie Dettori.

In fact, that was the five-year-old’s only win of last season and despite running second next time out under Dettori at Chantilly, Sestilio Jet’s form went off the boil somewhat.

He was never in contention in the Abbaye but did run with some verve in the Premio Omenoni in Italy.

The Pascal Bary-trained Gold Vibe (nap) ran with credit all of last season without unfortunately managing to get his head in front.

The gelding finished fourth to Sestilio Jet in this race last year and then ran two decent races behind Glass Sippers at the latter end of last season proving his worth at this minimum trip. The seven-year-old should be on the premises again.

Last year’s runner-up Batwan hasn’t been seen on a racecourse since, whilst Trip To Paris, who spent the winter racing at Meydan, looks very dangerous to dismiss.

The Godolphin-owned Victor Ledorum (nap) puts his unbeaten record and reputation on the line in this intriguing renewal of the Prix de Fontainebleau.

His race entries after this Group examination already include the French 2000 Guineas, the Prix du Jockey Club and the Grand Prix de Paris, so Andre Fabre will be leaving nothing to chance with the three-year-old.

Jean-Claude Rouget’s Helter Skelter received an indifferent ride in Prix Jean-Luc Lagardere behind Victor Ledorum and should be in closer proximity to the pace on this occasion.

The Wootton Bassett-colt showed plenty of promise at ParisLongchamp and Deauville prior to the Arc weekend and he could prove to be the biggest threat to the favourite.

The Freddy Head-trained Devil appeared to hate the conditions in the Prix Morny and finished stone last.

However, he is a much better performer than that as he showed by winning twice in Group company at Maisons-Laffitte and it would come as no surprise if the Wertheimer homebred puts up a bold show.

The Lady Bamford-owned Tropbeau (nap) clocked up an impressive three-timer in France last season before coming over to Newmarket on her final run to finish third in the Cheveley Park Stakes.

She was staying on in that race and had she not been hampered, the result may have been a lot different. It’s not difficult to see why she’s currently all the rage for the French 1000 Guineas.

The Freddy Head-trained filly Khayzaraan also holds Classic ambitions this season but she will need to step up another notch this year if she is going to live up to people’s expectations.

On paper, the filly appears to have more to find in this race than Tropbeau, but if anybody can train her on then it’s Freddy Head. The Sheik Hamdan-owned daughter of Kingman will certainly be hoping to push Tropbeau right to the wire.

Whilst all the focus will be around the first two in the betting, many of the other competitors in this field may well be overlooked.

At a decent price, the Mme Pia Brandt-trained Quiet Times looks really interesting on her return back to the turf after two decent wins on the Polytrack.

Irish-bred Dream And Do has been the subject of sustained support in the betting all week, while Criterium disappointment Secret Time has received a few nibbles from punters keen to take on the two market leaders.

The eye is naturally drawn to the Jean-Claude Rouget-trained Sottsass here and understandably so.

The chestnut colt took in the Prix de Suresnes, the Prix du Jockey Club and the Prix Niel last season before running a commendable third behind Waldgeist in the Prix De L'Arc De Triomphe.

He’s the form pick for sure but on seasonal debut last year he was beaten by Shaman at ParisLongchamp, and if ever a favourite is vulnerable then it’s first time out.

The Shamadal-colt Shaman (nap) carried his great two-year-old form over to a three-year-old and he had a really fruitful season which included wins at Saint-Cloud and Longchamp, second place in the French 2000 Guineas, a close up fifth in the St James’ Palace Stakes at Royal Ascot, runner-up in the Jacques le Marois, and third in the Prix Daniel Wildenstein on the Arc weekend.

He’s won first time out for the last two seasons so why not so again?

The likeable grey Way To Paris is an old hat around ParisLongchamp and the seven-year-old can certainly still hold his own in this type of company.

I personally thought he was unlucky in the Prix Foy and could quite easily have turned over the short-priced Waldgeist had he not been hemmed in. Trading at around the 20/1 mark, he’s a decent each-way shout here.

These four French Group races make up just part of a fantastic looking ParisLongchamp card on Monday afternoon. Please check out the website for all our latest horse racing odds and free betting tips on the French action!

How To Bet On Horse Racing

Horse Racing: A Beginner's Guide To Racing In Australia