How Does The Weather Impact Horse Racing?

The weather is a major factor to consider when betting on horse racing - how do conditions impact the sport? 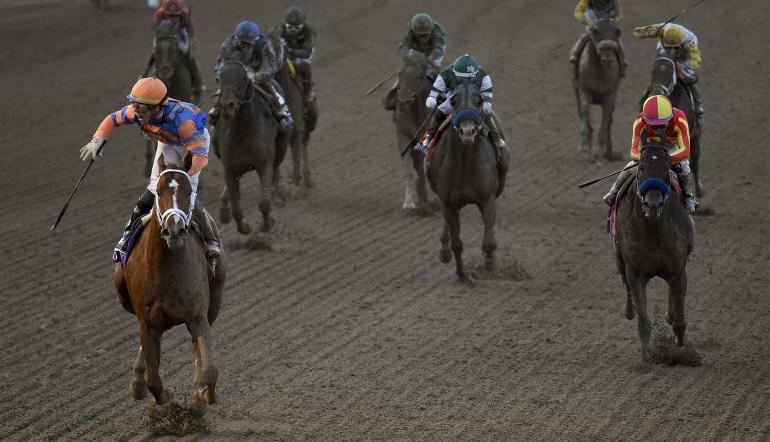 The weather is such an integral part of horse racing when you sit down and analyse it.

It can potentially ruin or make an owners/trainers/jockeys/punters day. If you do your homework the weather can be a really useful variable in your betting strategy.

Turf racing takes place on grass, whereas all-weather racing is run on a more robust surface typically made up of a synthetic rubber/sand/wax mixture called “Tapeta” or alternatively just sand on its own.

In Europe most of the racing takes place on the turf and it is significantly affected by weather conditions, whereas the all-weather rarely has any issues to contend with.

Rainfall has huge influence on horse racing and it will decide the going conditions at a racecourse.

Too little rain and the turf becomes hard, meaning there is less “give” under a horse’s foot than usual and the track is then either described as “Good” or “Good to Firm”.

Some horses like the turf hard  underfoot and the track rattling quick, and those are the horses to follow mainly in the summer months when there is the most sunshine.

Conversely when the rain has been falling constantly the turf becomes soft and then the racecourse will either describe their going as “Good to Soft” or “Heavy”.

This type of going is generally the norm during the winter months but it has been known to happen occasionally during the summer.

The advantage of having an all-weather surface at your racecourse (Fibresand, Tapeta, Polytrack) is that it allows racing to go ahead even when there is heavy rain or frost.

A standard turf racing fixture would not be able to race but an all-weather meeting can because their surface can handle such extremes in the weather.

The term “all-weather” racing can actually be somewhat of a misnomer as it is impossible to race in thick fog and you cannot race anywhere if the track is under a blanket of snow.

Typically around 5-8 racedays are lost each winter due to snow or heavy frosts. Unfortunately there is very little than can be done about this.

Whilst the track may be clear and the frost covers may have done their job, there are still logistical problems in getting horses, staff and race goers to a race meeting for it even to take place.

Cancelled meetings are a disaster for racing. Bookies cannot take bets which reduces how much levy is collected to go back into racing; jockeys cannot ride so therefore they do not get paid and even freelance writers like myself miss out on a wage too because there is no racing to preview and review.

Snow and frost are the worst possible nightmare for trainers and it really throws a spanner into their methodical training regimes.

Here are just a few examples of the problems for trainers when we experience a cold snap.

Using The "Going" To Your Advantage

The going is essential when you are looking at horse racing odds. You should check how a horse previously performed under certain conditions e.g fast going, slow going, soft going, quick going etc.

For any selection you make, try to match the current going on the day with that horse’s past performance. If it regularly performs well under specific weather conditions then there is a very high probability that it will do so again.

An example of this theory being put into practice is in my recent preview of the Charlie Hall Chase at Wetherby.

When assessing the form of all the runners I established that the eventual winner Ballyoptic would not be inconvenienced the going underfoot, writing:

“The Nigel Twiston-Davies-trained Ballyoptic will certainly have fitness on his side after he stoically carried top-weight to victory at Chepstow on October 12. Twiston-Davies is the most successful trainer in the history of the Charlie Hall Chase, winning it five times.

Stamina will not be an issue for the nine-year-old as his second place in the 2018 Scottish Grand National so proved.”

Stamina and the going are intrinsically linked when it comes to studying the form and Ballyoptic was literally standing off the page as the main pick on this occasion, especially when more and more rain arrived on the actual raceday.

Unfortunately I never heeded my own advice when it came down to giving a nap in that race because I also thought that some of the other runners had an equally good chance on the predicted Wetherby going on the Thursday before the race.

In my own defence and that of other tipsters/pundits, it is worth bearing in mind that track conditions do not always remain consistent throughout a raceday.

In the UK and Ireland the weather can suddenly take a turn for the worst so the bets you place early (especially antepost wagers) under a certain racing condition will not necessarily hold the same value on the “off” after the weather has impacted on the track.

Hindsight is a wonderful thing, but if you had asked me at 2.00pm on Saturday afternoon after witnessing the deluge of rain that had saturated the West Yorkshire track, my new selection based on the going would have been Ballyoptic.

Horse Racing
About the Author
By
Steve Mullington