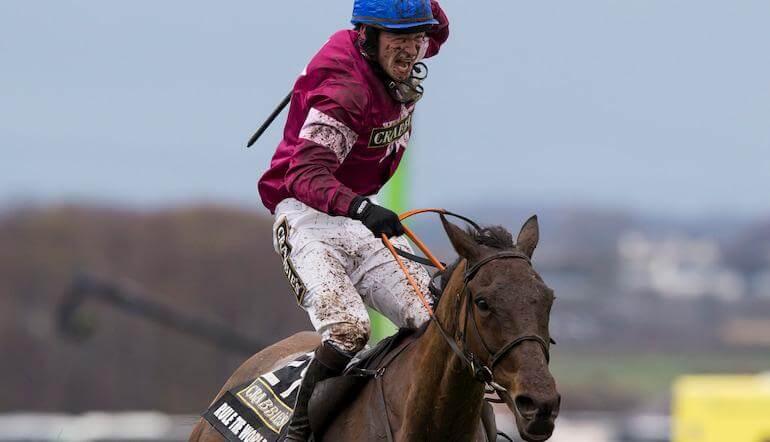 Ten heads are better than just the one right?

Well I sincerely hope so because armed with the simple brief “provide me with a NH horse for the forthcoming 2021/22 season that will win a few races and may possibly make it to the Cheltenham Festival”, I asked nine of my esteemed colleagues if they could assist me in compiling this year’s Ten To Follow.

You’ll be glad to know that I enrolled some of the best NH race readers in this sphere, including Weatherby’s Paul Ferguson (Jumpers To Follow) and Jodie Standing (Point-To-Point Recruits), as well as a whole host of other people with excellent NH knowledge. Be sure to click on the links to their work.

Here are ten horses we feel are worth following for the 2021/22 season - you'll be seeing a lot of these horses on the 888sport blog and on ITV Racing Tips throughout the campaign.

Fences and a step up in trip should be the making of Dusart this season and he is one of my main Cheltenham Festival ante-post tips.

The minimum trip was always going to be on the short side for this son of Flemensfirth, and a step up in distance will be right up his street.

I'd imagine the Grade Two Novice Chase over 2m4f at the Newbury Ladbrokes Chase meeting could be a starting point.

Races like the Dipper at Cheltenham, and the Scilly Isles at Sandown could be targets throughout the winter, before a potential tilt at the Marsh Novice Chase at the Cheltenham Festival. (Paul Dean)

One of the best handicapped chasers in training is surely Coconut Splash, who enjoyed a very productive campaign over fences last season without getting his head in front.

We last saw the six-year-old running a great race behind subsequent dual Grade 1 winner Chantry House at Wetherby in February, for which his mark of 137 cannot be altered as it was a Novice Chase.

Sure to be popular when he makes his return for Evan Williams in the autumn, Coconut Splash has a very attractive profile for a Festival Handicap come March considering he’s a young, lightly raced second season novice.

A race such as the Plate might be perfect for him. (Jake Price)

This filly is rather exciting, she’s done everything right so far, and was rather unlucky not to land the spoils on her debut at Cork.

She looks just the type to improve for a hurdle, and the Sea Moon filly will be a force to be reckoned with in the mares’ events this season.

She possesses a fair turn of foot too, as seen at Limerick on her second start, and going forward the world is currently her oyster. (Scott Hildersley)

Selecting just one horse to follow for the season is never easy, but I have opted to side with the Kim Bailey-trained Kyntara, who created a deep impression when winning a Warwick bumper by 17 lengths.

The third and sixth (both trained by Harry Fry) advertised the form by winning over hurdles in the spring and he had earlier won a Point in almost equally impressive fashion, when trained by Mel Rowley.

The son of Kayf Tara clearly copes well with testing ground and shouldn’t have a problem in going up in distance as the season unfolds. It will be disappointing if he can’t win races over hurdles this winter. (Paul Ferguson)

At Navan in March, he proved far too good for the opposition and returned home the very easy nine-length winner, sluicing through the mud and coming clear after the third from home to win in a canter.

A six-length point winner at Borris House in March 2020, Gars De Sceaux comes from the family of Bristol De Mai and is every inch a staying chaser.

He’ll likely start off in an ordinary novice chase, but I expect him to compete at the Festivals throughout the season. Maybe he’ll end up in the Brown Advisory Novices’ Chase, or the National Hunt Chase come March? (Jodie Standing)

Winner of her first two bumpers at Aintree and Cheltenham last autumn, this five-year-old mare then came back in the spring with two decent placed efforts.

First up, she finished third in the Festival bumper (and also the best British placed horse), before finishing second in the mares' bumper at Aintree, a race which had Eileendover back in fourth spot.

She should make into a high quality hurdler for the Dan Skelton stable and is one to keep an eye on as she embarks over timber this season. She’s definitely one to include in your sports bets. (Neil Watson)

Progressive over hurdles towards the end of the 2019/20 season, Overcourt made a very encouraging debut over fences back in October 2020.

By Court Cave out of mare who won three times over trips in excess of three miles, the seven-year-old remains completely unexposed over staying trips while his pedigree and run style suggests he should improve for a stamina test.

From a mark of 120, Overcourt appears to be well handicapped and looks capable of winning multiple races this season should he remain sound.

He may even emerge as a contender for some of the “regional” nationals, with the Scottish Borders National being Thomson’s most likely target for him. (Dan Overall)

A winner on his second start in France at Saumur in April, he was recruited by Dan Skelton out of the Henri-Alex Pantall yard shortly afterwards.

Having travelled strongly into that contest at Saumur, he was sent for home with four furlongs to run and quickly put the race to bed, winning by over 4 lengths having been heavily eased down in the final 100 yards.

He’s clearly been bought with a novice hurdle campaign in mind and with a decent flat pedigree, he should make his mark on some of the more speed-based tracks over the coming months. (Adam Mills)

Mighty Thunder absolutely romped home over four miles one furlong and twenty-four fences in the Edinburgh National in February.

Next time, he was second in the Midlands Grand National but returned to the winners’ enclosure with a sensational victory in the Scottish equivalent under Tom Scudamore four weeks later.

This win earned him a handicap mark of 151 (up 7lbs) and trainer Lucinda Russell won the Grand National in 2017 with One For Arthur off 148.

Mighty Thunder is fairly exposed but he looks to have strong claims for the Aintree Grand National (25/1 in our horse racing odds) and other staying races this season. (Samantha Martin)

Arguably one of the best chasers currently residing in the Gordon Elliott stable, Galvin is one of my long range Grand National hopes.

The promising seven-year-old is unbeaten in his past five starts, the last of which he was seen lifting the Sam Vestey National Hunt Challenge Cup Novices' Chase at the Cheltenham Festival.

He is currently joint second favourite in the betting for next April's Grand National at 25-1 and also gets a 40/1 quote for the Gold Cup next March.

Officially rated 154 over fences, Galvin looks sure to be contesting and winning some of the major staying handicaps this season. (Steven Mullington)