Tony Incenzo Remembers THAT Liechtenstein vs Ireland Match In 1995 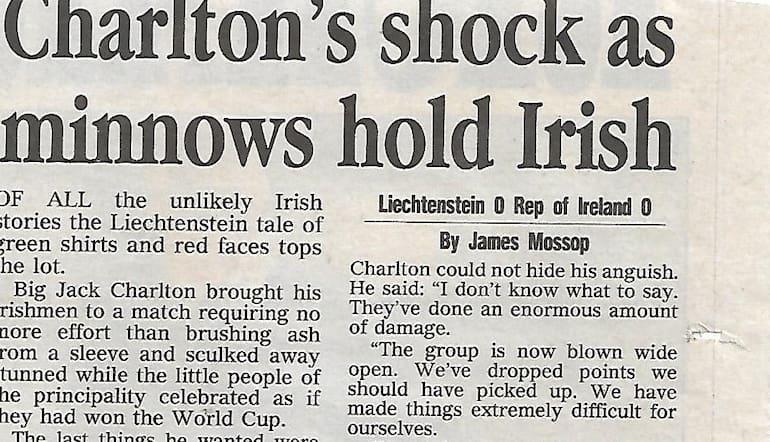 CONTINUING my international football nostalgia stories during our current World Cup interest, the most one-sided scoreless draw I have ever witnessed live was…

When I say one-sided, if this was a boxing bout it would have been stopped very early on. Ireland absolutely pulverised the host team but quite simply couldn’t score.

I still have handwritten stats from the game. I scribbled them down whilst watching on in amazement from the press box in my role as a reporter for Capital Radio: 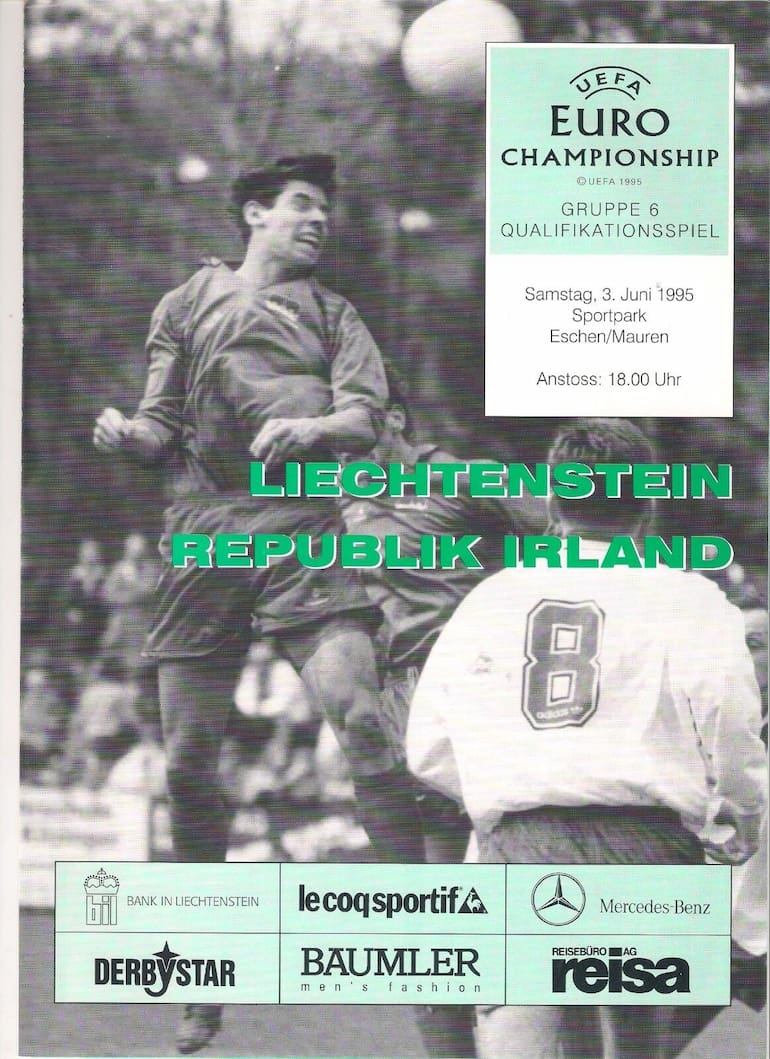 So the Irish team had a staggering 40 efforts on goal without success. An astonishing spectacle that defied all football betting!

Let me put the whole occasion into perspective. First of all, Liechtenstein is one of the most beautiful places I have ever visited. A mountainous micro-state full of picture postcard Swiss-style chalets and incredibly fresh air.

Located in the Alps and landlocked between Austria and Switzerland, it is Europe’s fourth smallest country covering just 62 square miles with a population of only 39,000.

The match itself was played at Sportpark Eschen-Mauren in Eschen. The rudimentary venue had a cluster of tiny stands offering 500 seats and plenty of grass banking for spectators to stand on.

A leafy perimeter curtain of trees surrounding the stadium was overshadowed dramatically by some giant, snow-capped mountains behind one goal.

Liechtenstein’s team had never won in a major competition before. They were a motley crew of bankers, postmen, builders, insurance brokers and shop keepers who mainly plied their footballing trade as part-timers in the Swiss regional leagues. In fact, they only had one professional player - Mario Frick of FC St Gallen.

As for the Republic of Ireland, this was a crucial tie because they were top of the qualifying group for Euro 1996 in England.

Surely it was hardly worth betting that they would slip up when facing rock bottom Liechtenstein under the watchful eye of astute manager Jack Charlton.

Charlton had previously suffered only 13 losses from 88 fixtures in charge of the Republic and masterminded unprecedented appearances in two World Cup Finals plus a European Championship tournament.

They were the world’s ninth ranked international team back then. However, Charlton couldn’t include injured midfield stars Ray Houghton, Andy Townsend and Roy Keane in Liechtenstein.

Nevertheless, one-way traffic ensued from the start before an official attendance of 4,500. Six feet four inch Irish striker Niall Quinn flashed a couple of headers just over in the opening five minutes.

Indeed, he could have scored on six separate occasions in that first half. Amidst wave after wave of attack, Sheridan, Aldridge (four times), Irwin, McAteer, Staunton (three times), McGrath and Babb all went close.

With the chances piling up in total domination, Jack Charlton allegedly told his players at half-time: “There’s nothing I can do for you. You’ll have to work things out for yourselves.” 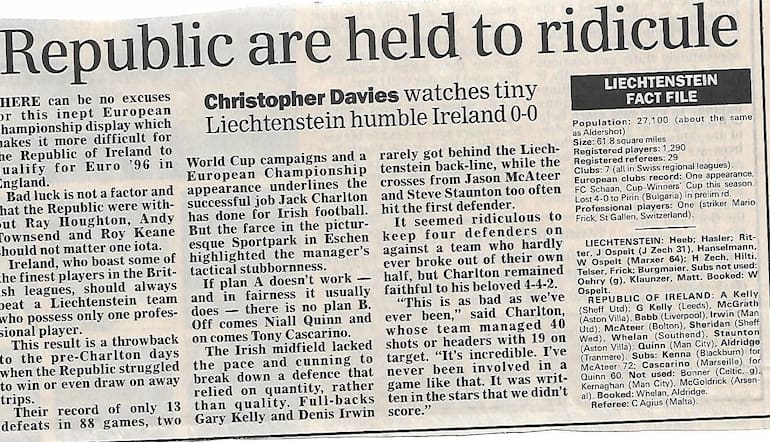 Liechtenstein held firm by virtue of a ten man blanket defence protecting goalkeeper Martin Heeb. Believe it or not, Heeb’s day job was groundsman at this very stadium. He had actually cut the grass on the pitch a few hours before kick-off and personally took the goal nets down afterwards!

On the final whistle, those plucky Liechtenstein players celebrated as if they had won the World Cup, the Euros and the Eurovision Song Contest combined! They performed several laps of honour and received a heartfelt standing ovation from supporters of both teams.

I then stepped down pitchside to interview Jack Charlton and he told me: “I have never been involved in a football match like that before. It was written in the stars we weren’t going to score because our finishing was poorer than anything I’ve ever seen from my Irish team. I will remember this for a long, long time.”

The next day’s newspaper headlines screamed:

“Republic are held to ridicule”

The Republic of Ireland eventually finished runners-up in Group 6 before losing 2-0 to Holland in a qualification play-off at Anfield.

Furthermore, that 0-0 draw against Liechtenstein is still roundly considered to be the all-time worst result in Irish international football history.