Just How Good Is Erling Haaland?

Erling Haaland has been unstoppable so far this season but just how good is he? 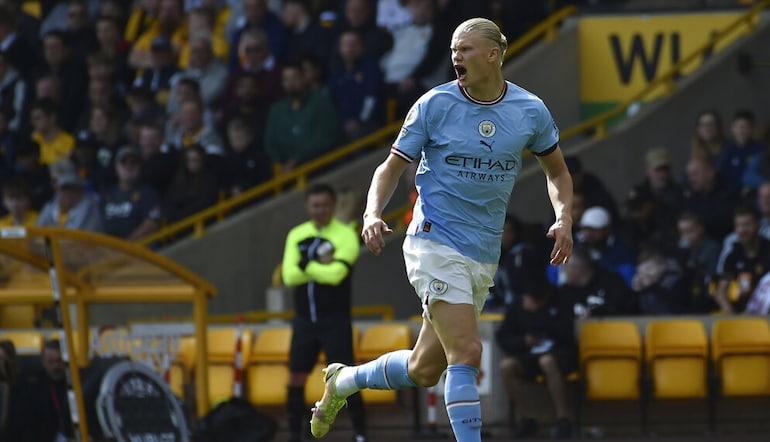 Erling Haaland couldn’t have dreamt of a better start to his Manchester City career.

His 11 goals in seven league matches is the most of any player in Europe’s top five leagues, and only Robert Lewandowski (1.23 to 1.22) can pip Haaland in non-penalty expected goals per 90.

The Norwegian is a goal-scoring cyborg. The numbers are spectacular (1.04 goals per 90 in league action for his career), yet the actual inevitability of Haaland on the pitch is perhaps more stunning.

Footballers at 87 kilograms and 6’3 are not meant to be as quick as Haaland is. Defenders cannot get close to him. If they do, he’s too strong and too skilled.

Pair that with intelligent movement and clinical finishing, and you start to get a picture of how Haaland is so unstoppable.

No player in the Premier League has more goals this season than Erling Haaland.

No player in the Premier League has more assists this season than Kevin De Bruyne.

To give some context to his copious goal scoring, Lionel Messi averages just 0.97 league goals per 90 for his career. Robert Lewandowski is at 0.87, and Cristiano Ronaldo is at 0.86.

Sure, that triumvirate have bigger sample sizes, but part of the reason for their lower productivity was the fact they started their careers at a slower pace. Haaland has just turned 22.

Of course, he is not the complete player that Messi is or even Ronaldo was in his peak years.

But as a pure goalscorer, Haaland is in almost unchartered territory. The Golden Boot is pretty much a foregone conclusion when it comes to Premier League betting odds.

Haaland is venturing into the realm of all-time greats. Some might point to the Eliteserien and Austrian Bundesliga being included in those stats.

In that case, let’s take a look at the pinnacle of football betting odds. Haaland has 26 goals in 20 Champions League appearances – that’s more than Hernan Crespo and Gonzalo Higuain scored in their entire careers.

In all likelihood, he will overtake Patrick Kluivert and Luis Suarez before the beginning of 2023-24.

Manchester City’s supremacy in Premier League predictions has, at times, made it hard to evaluate the individuals. Naturally, it is easier for Haaland to score at this unprecedented rate in a team as brilliant as Pep Guardiola’s City.

The achievements are quantifiable, though, and this is not like an empty-calories stat-padder. Haaland’s presence changes City for the better.

Answering how good Haaland is right now depends on what we are judging.

As a pure goal scorer, it is a tossup with Lewandowski for world’s best, though the Pole doesn’t possess the same physical attributes and general air of irrepressibleness.

More importantly for a player of his age is what he can become. This is still just the start of Haaland’s journey.

The absurd misnomer that he might struggle in the Premier League (born out of a subpar Community Shield performance) has been obliterated as brutally as Haaland does to defences.

Haaland is in the perfect environment to continue on an almost unheard of trajectory. City are not only loaded with creative talent – there is stability at the club, and a desire to continue dominating the English game.

Haaland only makes it easier for them to do so. So, just how good is Erling Haaland? Historically? Ridiculously? Take your pick.