Former Arsenal defender Lauren believes the Gunners can beat Manchester City to the title this season. 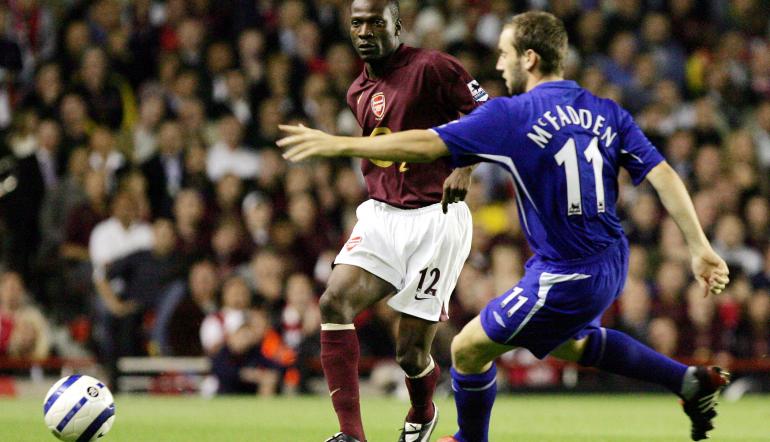 Former Arsenal defender and famed Invincible Lauren believes the Gunners are firmly in the reckoning to win a first Premier League title for 19 years under Mikel Arteta.

“I haven’t been surprised by Arsenal, but I didn’t expect the team to get all of Arteta’s concepts so early. Everybody in the team knows when to press. They keep momentum. Their passing is very good.

“What did surprise me is they are capable of playing at the same level for 90 minutes in all of the games. This is very important, to maintain their consistency for the whole game. They are doing this and it’s fantastic.

“If they are up there around late January, then they can be a serious contender for the title.”

The North London giants flew out of the blocks this season and have been winning ever since, confounding expectations and disproving the doubters who claim their squad lacks genuine depth.

Yet on the subject of their limited resources Lauren insists the club should avoid any temptations to strengthen in the next transfer window, instead going with what they’ve got until the season’s end.

If this may count as a somewhat unpopular option among the Emirates faithful we only need to acknowledge the players Arteta presently has at his disposal, a young team full of verve and adventure who are lighting up the upper echelons of the top-flight.

Arteta said Arsenal watched the City game together on the team bus this afternoon.

I asked what the reaction was like when Toney scored:

"As you can imagine," he said with a smile. pic.twitter.com/b1r2KffSoz

Of these, Bukayo Saka especially stands out, the 21-year-old putting in some outstanding performances of late after a notably slow start to his campaign. Knowing a thing or two about wingers after facing a multitude of them across a decade of playing at the highest level, Lauren is evidently a fan.

“Saka has many attributes. He understands the game and what I like about him is he doesn’t rush his actions. He gets in those positions higher up the pitch to damage the opponent and only there he is entitled to do his tricks. He knows where and when he can dribble and that is important from a young lad.

“He can take players on and I believe he can keep progressing. He’s a top player.”

At the back meanwhile, Arsenal have been solid, conceding the joint-fewest number of goals after 13 games, and central to their defensive fortitude has been a pairing who appear to be getting better, and stingier with every passing fixture.

Having played to the right of some iconic partnerships down the years, does Lauren suspect William Saliba and Gabriel may go on to be favourably compared to the likes of Adams and Bould one day?

“Saliba and Gabriel are already a great centre-back partnership. There is a real understanding between them.

“There was a moment yesterday against Chelsea when Gabriel lost his position a little and Sterling attacked the space. But Saliba came in from behind and was quicker. He reads the game so well and he is quick and confident.

“Gabriel can score goals at set-pieces and he understands the game. He’s been great. He is aggressive in his approach and this is important when you play a high press.

“Those two centre-backs are right up there at the moment.”

Another player who has received a lot of plaudits this term is Granit Xhaka, who has transformed his reputation at the Emirates and in doing so became a pivotal figure in Arteta’s revolution.

“You know what? I had to turn 27 to understand football correctly, that's his merit. Mikel showed me football anew. He explains the game, the tactics, the opponent to you so that you can only go out and win. He's a crazy guy.” [@Blickch] #afc pic.twitter.com/2Gf38298d8

Yet here, instead of simply praising the Swiss star, Lauren focuses on the midfield as a unit, pointing out how one part inspires the other.

“The reason Granit Xhaka is doing well is because Partey is dominating the middle of the park. That allows Xhaka more freedom to get forward and combine with the strikers. The better Partey is, the better that makes Xhaka because there is a balance. Everybody contributes.”

The same thinking is applied when assessing the Gunners’ attack, with the two Gabriels, Martinelli and Jesus, observed as a duo, rather than as individual talents.

“Martinelli is not yet a player who has got to his peak. He’s on the way and he’s doing well, playing better than last season and being more consistent in his performance.

“He is a different player to Jesus, who is mobile and attracts players while Martinelli is used more for quick transitions, going forward. Arsenal need Martinelli because even if they dominate possession sometimes opponents defend with a low block and they need his speed for that quick transition. This we’ve seen many times this season and he is a real player.

“These players will become superstars. Look at Gabby Jesus who is playing so well and can make the difference. Even when he doesn’t score he holds onto the ball, which allows the midfield players to come out. He can stretch the team as well."

Arsenal’s Premier League record ahead of the World Cup:

Arteta’s side will be top of the tree at Christmas. 🎄 pic.twitter.com/gz3IpiMBUY

The last time Arsenal won a Premier League crown, Lauren was their first-choice right-back, the Cameroon international playing a considerable part in the Gunners going through the whole season undefeated.

Nearly two decades on, he is watching the same club win on a weekly basis once again, this time as a fan.

It will not surprise you in the least to learn that every word spoken above was accompanied by a broad smile.

Who will win the Premier League?

I wish for Arsenal but we’ll have to wait. If they are still up there at the end of January then anything can happen.

Real Madrid. Once they get to the latter stages, they know how to compete. It is not a question of luck that they’ve won the competition five times in recent years.