The 2019 NFL International Series begins this weekend but are the five best games to take place in the United Kingdom? 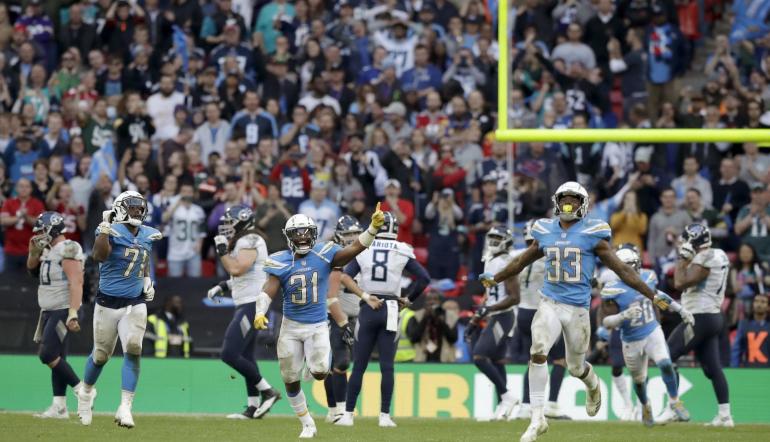 NFL fans, the International Series is back for another year. With four exciting games set to take place at Wembley Stadium and the Tottenham Hotspur Stadium, American football fans will be looking forward to getting their gridiron fix.

Starting with the Oakland Raiders taking on the Chicago Bears this weekend, viewers may be treated to some of the greatest moments in NFL UK history. Without further ado, let’s take a look back at the five most exciting International Series games.

The first ever International Series game to take place in the UK, over 81,000 NFL supporters flocked to Wembley Stadium to witness NFL action on British shores. It wasn’t the greatest game in NFL history but it deserves a place on this list based on that fact alone.

Eli Manning threw for just 59 yards in a scrappy affair but the Giants quarterback scored a rare rushing touchdown to give New York some breathing room. The Dolphins threatened a late comeback but Miami kicked out of bounds from the restart and the Giants held on.

The Wembley arch has seen better games since that day in October 2007 but this was the moment that convinced UK NFL fans that the sport would thrive on this side of the Atlantic Ocean.

2013 marked the first year of multiple International Series games in the UK and fans with tickets to this encounter were treated to an incredible contest. Le’Veon Bell was making his NFL debut but a certain Minnesota running back was about to steal the headlines.

Adrian Peterson was one of the biggest names in the NFL at the time and he lived up to his reputation with a sublime performance. The Vikings running back notched 140 yards on 23 carries while also scoring two touchdowns – the Steelers couldn’t live with him.

Minnesota were 34-17 up heading into the fourth quarter but Pittsburgh reduced the deficit in the final period. Unfortunately for the Steelers, they ran out of time as the Vikings closed out the game to secure a famous win in front of 83,518 fans at Wembley Stadium.

This game had everything. Looking at the final score, you might’ve assumed that the game had turned into a bit of a shootout. In fact, it was quite the opposite with six touchdowns scored by defensive players – the Wembley crowd were thrilled to say the least.

Having said that, the Bills and Jaguars still combined for 670 offensive yards; which suggests that it wasn’t totally defensive minded. Allen Hurns caught the decisive touchdown pass late in the fourth quarter to give Jacksonville a hard-fought but much-needed win.

Still the highest scoring game to this day, fans went home overjoyed after a topsy-turvy contest. In their third fixture since agreeing a London ‘residency’, the Jaguars finally clinched their first victory in the UK. Will Jacksonville add another win to their tally in 2019?

Kirk Cousins outshone Andy Dalton at the quarterback position but it wasn’t enough for the Redskins as Cincinnati rallied to earn a tie. The Bengals are due to face the Los Angeles Rams at Wembley Stadium this year and the AFC North side will be hoping to go one better.

Dustin Hopkins held his nerve to slot a 40-yard field goal with just over a minute remaining in the fourth quarter and that is the way it stayed in overtime. Should the overtime rules change? That is a debate for another day.

Ties are rare in the NFL so to see a stalemate in London is something rather special. Yes, it isn’t the ideal outcome for the teams but fans got to see an NFL contest go the distance. You would get good NFL betting odds on one of the 2019 UK games ending a draw.

In terms of drama, you’ll be hard pressed to find an International Series game to rival this one. Tennessee scored a field goal to bag an early lead but the Chargers responded and took control for most of the contest.

With less than one minute on the clock, the Titans scored a touchdown to reduce the deficit to just one point with the PAT to follow. Surely Tennessee were going to take the game to overtime? Nope, Mike Vrabel was thinking about the win and the win only.

In a dramatic twist, the Titans decided to go for two in an attempt to win the game outright. A penalty gave Marcus Mariota another bite at the cherry but Tennessee failed in their two-point conversion attempt and the Chargers held on for a famous London triumph.