Who Is The Greatest Quarterback In NFL History?

888sport look at five of the best quarterbacks in NFL history but who tops your list? 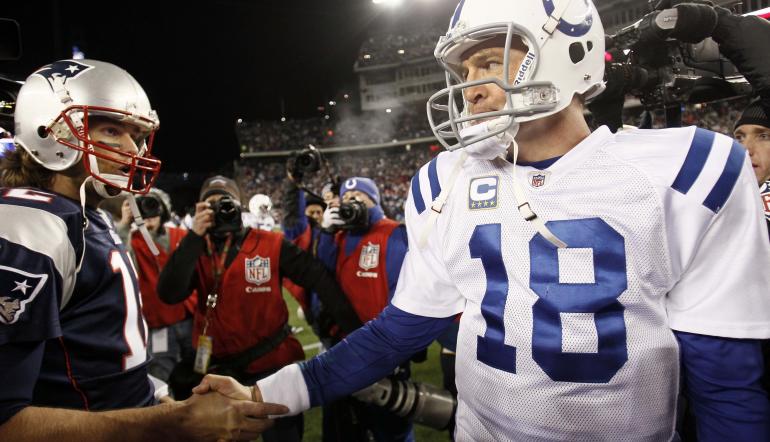 In a team sports, few players are as important as quarterbacks are to American Football teams. A great quarterback can carry his team to victory, while a mediocre one will struggle to keep his team competitive even if the complementary pieces are superb.

The Super Bowl heroes are usually the men under centre. The one player on the field capable of putting the team on his back, dictating the pace of the game and executing a ring-winning drive.

Being a quarterback requires a special set of skills beyond the obvious passing ability, it requires perfect judgement, vision, and quick-thinking. With different circumstances depending on era, team and opponents, comparing quarterbacks isn’t simple.

The greatest ever quarterback debate will rumble on for generations to come, so instead of tackling that specific question, we’ve picked five of the best in NFL history…

The Green Bay Packers haven’t always surrounded Aaron Rodgers with the talent to succeed. Rodgers only has one Super Bowl victory to his name as a result and a modest playoff record of nine wins in 16 outings.

Rodgers is a man for the spectacular – which he’s needed to be on recent Packers teams – and he does it while almost never turning the ball over.

The all-time NFL leader in interception percentage, Rodgers has combined his natural ambitious passing with precision. Opposing defenders rarely get a sniff of the ball, and his drives up the field are often spectacular.

When healthy, Rodgers is as unstoppable as any quarterback in the league and regularly lives around the 4,000-yard mark.

Rodgers’ Packers are 10/1 to make the Super Bowl this year in 888sport’s NFL betting. How new head coach Matt LaFleur gets on with his Hall of Fame quarterback could well be the deciding factor in their campaign.

The Michael Jordan of the NFL, Tom Brady’s journey from 199th overall draft pick to six-time Super Bowl champion was a special one.

His partnership with Bill Belichick is the most dominant in league history, owning the AFC East for over a decade. The blend of longevity and excellence is what all sportspeople dream of – Brady has perfected it as well as anyone.

Others on this list have stat sheets that surpass Brady – well, they do in the regular season at least. Others have a reputation for the jaw-dropping pass in a way that Brady perhaps doesn’t.

But crucially, none of them come close to his slow-heartbeat, ruthless playoff drives.

From first overall pick to five-time MVP, Peyton Manning’s career had everything.

A college superstar that lived up to the billing, Manning shattered many a rookie NFL record in his first season with the Indianapolis Colts, but that was just the beginning of his Hall of Fame career.

It was actually his third Super Bowl appearance, and second loss, that was the best year of his career, as he set all-time records for single-season passing yards and touchdowns.

In the following campaign, he became the all-time leader in passing touchdowns before lifting his second Super Bowl in 2015. Many NFL fans would name Manning as the greatest quarterback in NFL history. With a list of records like he holds, it’s hard to argue with that.

A good test of how much rings impact your legacy, Dan Marino is the greatest quarterback not to hold the Super Bowl trophy aloft.

He won just eight of his 18 career playoff games with a less than stellar touchdown to interception rate – Marino has a regular season CV as good as anyone in NFL history, but his playoff performances hold him back in the greatest ever discussion.

Although he regularly passed 3,000 yards, Marino didn’t won another MVP trophy. He was, however, named in the All Pro first team on three occasions.

Marino was one of the NFL rookies to watch as he won the 1983 Rookie of the Year. The Miami Dolphins will be hoping Josh Rosen can get somewhere near that standard this season in his second year in the NFL after arriving from the Arizona Cardinals.

Four Super Bowls, four Super Bowl rings for Joe Montana. As cool under pressure as any quarterback in NFL history, Montana might well rank at the top of the ‘clutch’ list.

In those four Super Bowl appearances, he never threw an interception, while winning three Super Bowl MVPs. Passing 3,000 yards wasn’t a challenge for Montana, but he surprisingly never led the league in passing yards in a season.

Accuracy, meanwhile, was Montana’s speciality. It wasn’t just Super Bowls when interceptions were rare, the San Francisco 49ers quarterback seldom turned the ball over, keeping opponent’s defences on the field and grinding them down.

The run to his fourth Super Bowl in 1989 was one for the ages. Montana compiled over 800 yards, threw for 11 touchdowns and didn’t register even a single interception.

His position among the greatest ever is without question, though his numbers aren’t quite as gawdy as some others.

NFL
American Football
About the Author
By
Sam Cox