Football Gold: Why Your Old Sticker Collection Could Be Worth A Fortune

Football stickers are more valuable than ever before but are you sitting on a small fortune? Check out our guide to the most expensive stickers in football... 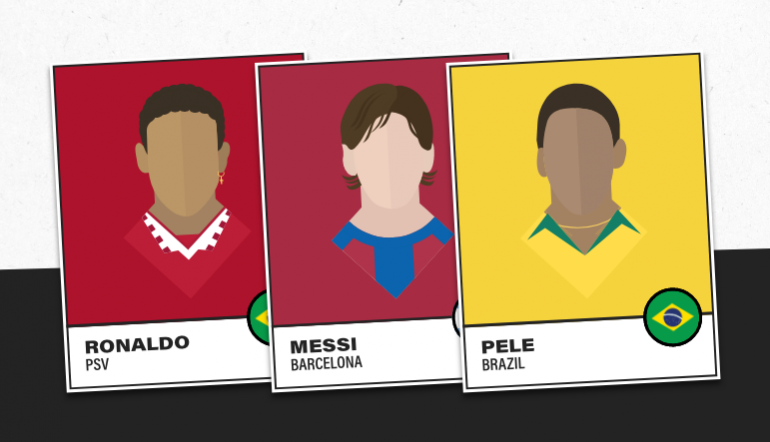 Once the hottest property in any playground, football stickers have long been one of the biggest talking points for school kids across the country.

From the nervous anticipation of ripping open a fresh packet to find out what stickers waited inside, to the unbridled joy of pulling out a fabled shiny, the coming together of mystery, collectibles and the unwritten rules of the swaps market means sticker collecting has remained a favourite pastime of kids everywhere.

But it’s not only kids who revel in collecting the latest stickers. These days, football stickers have grown far beyond their playground roots, instead falling under the increasingly large umbrella of football memorabilia for hardcore collectors.

Football stickers, much like retro shirts and programmes, are now expensive, sought-after commodities that are bought and sold, almost like stocks and shares.

Whether you’re a bloody-minded completionist or a sporting memorabilia expert, the internet has changed the world of football stickers in recent years, serving as a one-stop swap shop for the humble football sticker.

Fans in search of that elusive shiny or nightmare-inducing haircut on an 80s player portrait shot can finally fill their boots and complete that dog-eared sticker album from years gone by.

Not only that, but truly rare stickers are changing hands for eye-watering prices as the fabled “rookie sticker” has seen its value skyrocket in parallel with players’ careers.

Football stickers are no longer just a hobby, but a way for some people to make serious money. You could have a goldmine tucked away just waiting to be discovered.

We’ve dug into the data to truly satisfy the stat fans, allowing you to see just how valuable some of your old stickers are – and if it’s worth making your way into the attic to try and dig them out.

The All-Time Most Valuable Football Stickers

Like the football transfer market, a sticker’s final price doesn’t necessarily indicate its true value. But judging by the astonishing price tags we’ve seen from this selection of football stickers, there’s obviously a market for them! 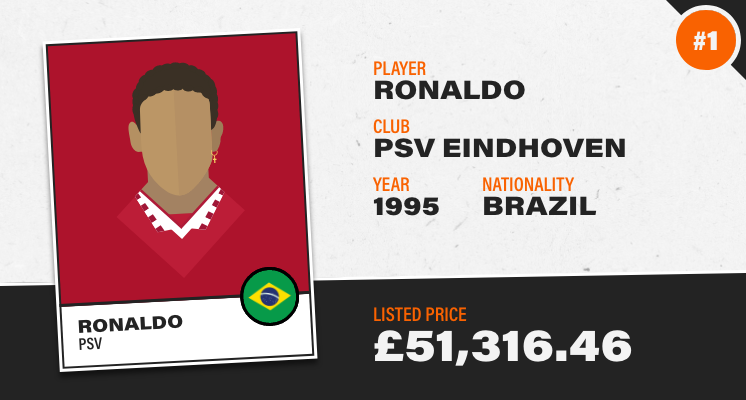 The Brazilian goal machine’s first appearance in the world of football stickers is the most valuable of all time, showing off his trademark cheesy grin to the world as he embarked on his first season in the Netherlands. 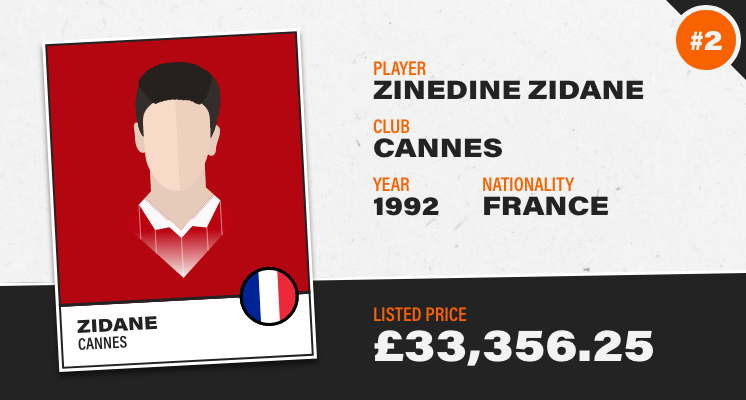 Zizou belongs to (another) very exclusive club - only eight players have won the World Cup, Champions League and Ballon d’Or. Looking back to where it all began, his 1992 Cannes sticker is highly sought after. 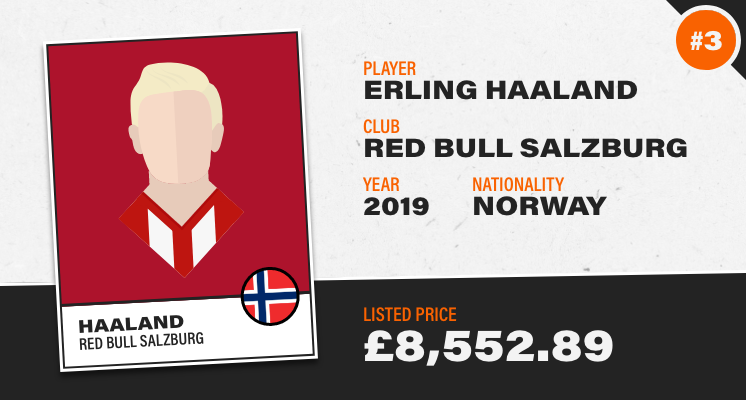 The hottest prospect in the modern game is also one of the most wanted assets for collectors. Haaland’s rookie sticker is unique in that, well, he himself is still a rookie at the time of writing. 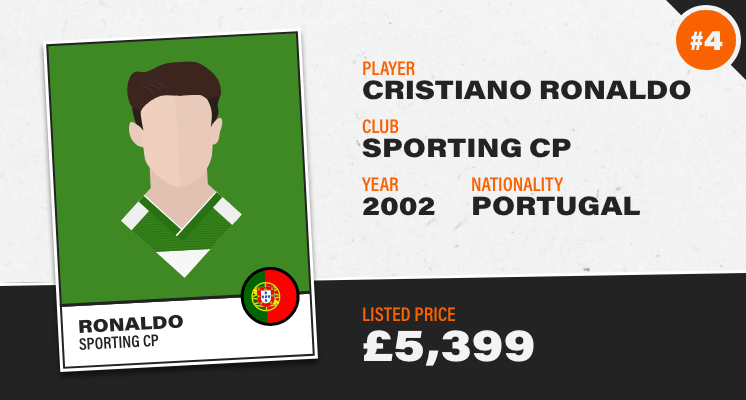 CR7 is one of the greatest of all time, and he started his glittering career at Sporting CP in his homeland of Portugal. His first appearance in a sticker book can still command a hefty price tag. 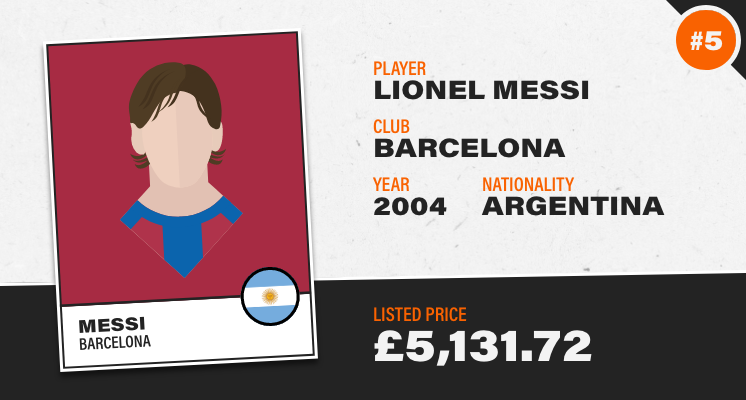 Messi may have appeared in 18 different La Liga collections, but it’s the Argentine GOAT’s first Barca appearance that can really boost your bank balance, long before his 10 La Liga titles and four Champions Leagues elevated him among the best to ever play the sport. 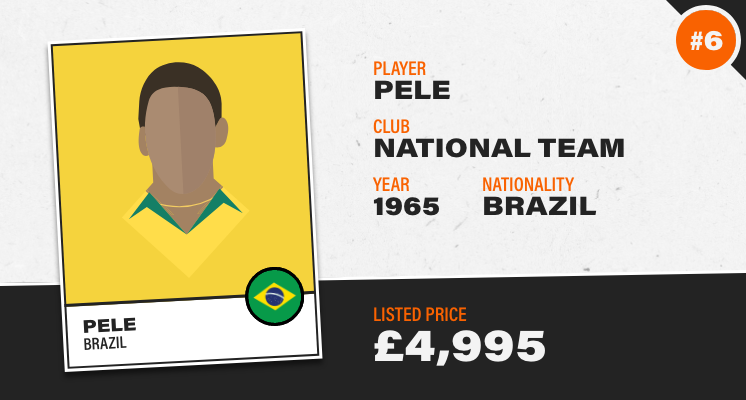 Arguably the greatest football player of all time, Pele’s goalscoring feats and iconic skills were matched only by his longevity in the game, and this sticker from the peak of his powers is a reminder of his glory days. 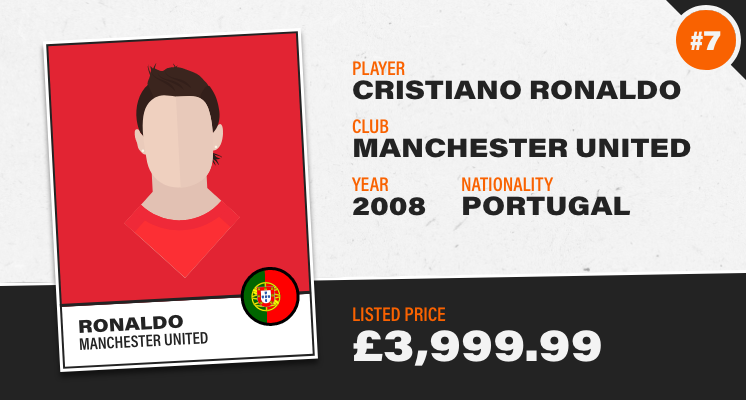 Ronaldo may have started his career in Portugal, but it was in Manchester that he really made waves. This sticker from his heyday at United reflects the impact CR7 had on the Premier League. 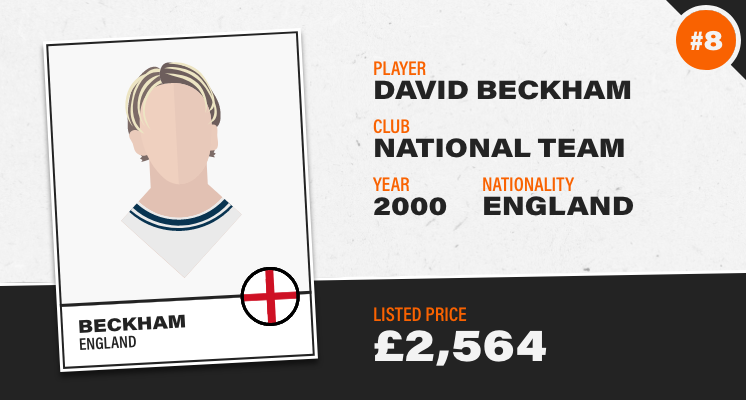 Beckham’s second major tournament for his country came in 2000 in Belgium and the Netherlands. It wasn’t a happy summer for England, crashing out early in the group stages, but this sticker of the iconic midfielder has certainly grown in value ever since. 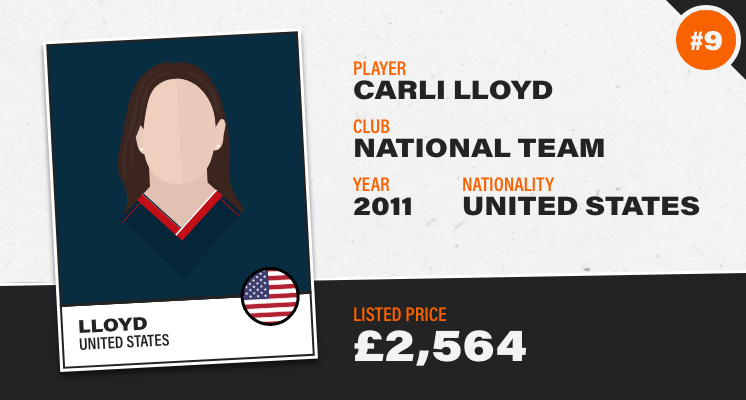 Women’s football has grown in prominence in recent years, but it’s in the United States where the sport has long had a strong following. Star players such as Carli Lloyd are national heroes stateside, and with more than 300 caps to her name, Lloyd’s sticker is a huge asset for collectors. 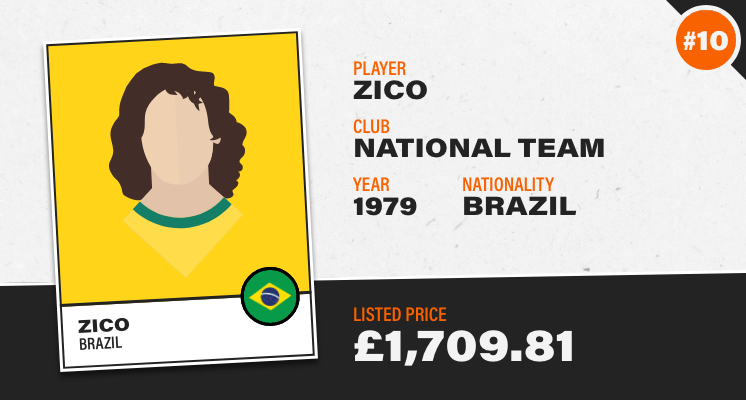 Arthur Antunes Coimbra, better known as ‘Zico’, dominated world football in the 1970s and 1980s. The attacking midfielder is widely regarded as one of the best to ever lace up a boot, and up there with Pele as one of the greatest to play for the Seleção.

The UEFA Champions League is arguably the world’s most prestigious footballing prize. Each matchday is stacked with dramatic games bringing together the best European clubs in a battle to see who can reign as the ultimate club team.

The most expensive listings for complete Champions League sticker albums we found on eBay show that collectors see real value in the competition, too. 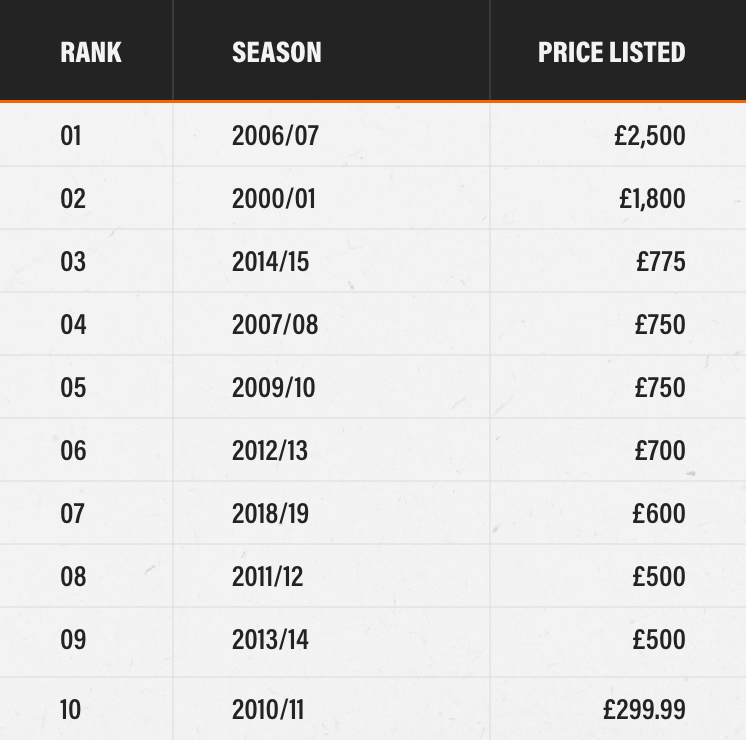 The top two spots are occupied by the same season’s edition of the Champions League sticker album. The 2006/07 competition is perhaps most famously remembered for the three English semi-finalists.

The top three is rounded out by the 2000/01 album, which is listed for £1,800 – more than twice the sum asked for the sticker album in fourth place.

Building a squad from scratch: How much to complete a sticker book?

It’s all very well and good bidding online for a completed sticker book from the past. But for hungry young collectors, there’s no better feeling than opening up a fresh pack in search of new additions, no greater satisfaction in finally getting the player you need to finish your sticker book.

Professor Paul Harper came up with a formula to cover the cost of buying the 682 stickers which made up the Panini 2018 Russia World Cup sticker album.

Round up nine friends to swap your doubles, and you should manage to get your own costs down to £250.

For the Panini Premier League 2021 sticker book, you’d need to spend £90.30 on 129 packets to obtain 642 stickers. But again, this doesn’t consider the extreme unlikelihood that not one of them will end up on your swap pile.

The odds of each sticker you collect being one you need, each time, are like this:

And so on. Multiply all those fractions together, all the way down to 1 / 642 and you get…an unfathomably small number! But, of course, there’s only a tiny chance of picking up the entire album’s worth of stickers for just 90 quid.

Future stars: Which players should you hold onto now?

One thing we’ve learned so far is the value of the rookie sticker– it made up nine of the top 10 most valuable sold listings. Diving into our research on the most valuable Premier League clubs’ individual stickers, we get much the same story.

Manchester City’s most valuable squad member sticker is Phil Foden, who impressed as England made it to a first European Championship final in 2020. Two of his rookie stickers have recently fetched £723.48 and £289.39.

You never know if a player’s going to make it big until they’ve made it big. But in the meantime, it may be worth hanging onto a few of those Euro 2020 squad players if you have them.

Get building: Our top tips for collecting football stickers

If you’re looking to turn your childhood memories into easy money – or are a serious collector looking for that one special item – you’ll need to do your research.

The value of football sticker albums over time has proven quite unpredictable. While a copy of the 1970 World Cup completed with all 288 stickers sold last year for £5,050, the average price of the 1974 edition online was just £337.50. 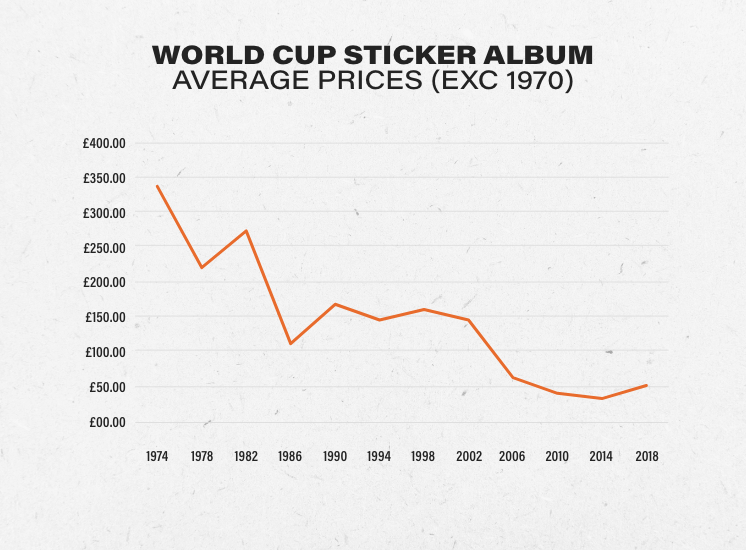 The Merlin era of Premier League stickers – spanning 1994 to 2008 – also has its peaks and troughs. 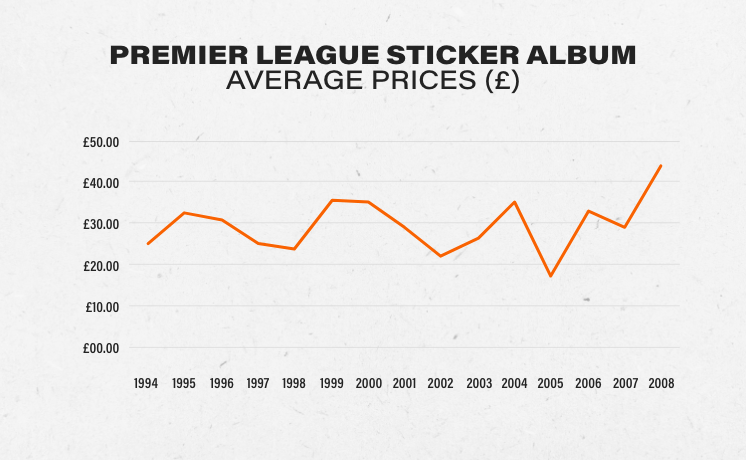 Aside from the rare collector’s items like the Mexico ’70 edition – the first of its kind – it looks as though the single, loose stickers are what gets collectors’ motors running.

If you are planning to raid the online listings to pick up some potential winners, here are some things to consider.